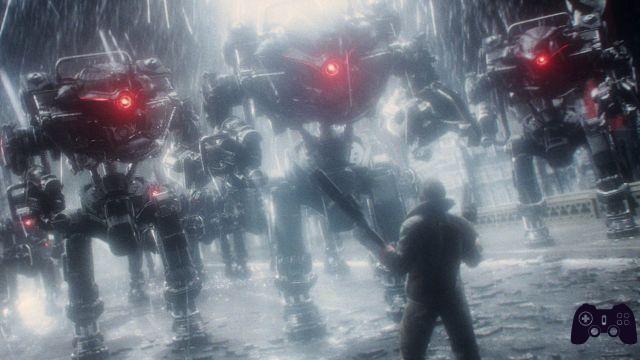 The Wolfenstein series over the years has been the perfect demonstration that time, even within the videogame industry, does not discount anyone: despite the fact that Wolfenstein 3D has invented the first-person shooter and his successors (while collecting discrete results ) have failed to follow up on the tradition, leaving to others the task of leading and innovating a genre that is now fundamentally different from the one launched in 1992 by id Software. With Wolfenstein: The New Order the boys of MachineGames (studio born in 2009 by "exiles" of Starbreeze Studios) try to go against the trend by offering an exclusively single-player shooter with strong references to the "old school" from the point of view of mechanics. Will the end result be doomed to fail like Operation Seelöwe or will it be more like a Normandy Landing?

How i Won the War

The Nazi war machine for some mysterious reason is extremely advanced than the Allied one, with the consequence of turning the outcome of the Second World War in favor of the Axis forces. Not even a mission to the verge of suicide aimed at the destruction of the fortress of Deathshead, the scientist behind the war superiority, succeeds in subverting the fate of the war. After a head injury sustained during this mission the Captain William Blazkowicz remains in a vegetative state for 14 years, awakening to a world in which the Third Reich has imposed itself on the rest of the world.
The narration is undoubtedly one of the winning horses of the product, given the excellent work done on the screenplay front: The New Order during the approximately 16 hours of play effectively touches both themes that one expected to encounter (the Nazi delirium and obsession with the "superior race") and more unexpected topics. The damn inspired dialogues, especially the thoughts of Captain Blazkowicz between one segment of the game and the other, and the characters practically all functional to what happens on the screen complete the work, decreeing the success of Phase one of the MachineGames operation.

A matter of Talents

From the point of view of the mechanics, as we said at the beginning, The New Order follows an old school philosophy in some respects, but it is mixed with some more modern techniques: the perfect example is the management of health, divided into bands of twenty points beyond which it will not regenerate (for example, if it goes down to 30 points the regeneration will stop at 40). More archaic choices such as having to press a button to collect ammunition and equipment from the ground alternate instead with fresher decisions, with an atypical but on balance effective cover system (by pressing the L1 button it is possible to act on the left analog stick to make the character in that direction, including above, below and diagonals) and above all the system of Talents, a successful variation on the theme as regards the "role-playing" progression of the character. Instead of accumulating experience to then spend to unlock the skills, Captain Blazkowicz will learn what he needs on the field eliminating enemies in a certain way. Everything is grafted onto a control system borrowed from modern FPS, which does not betray a certain propensity for action given the possibility of using "in akimbo" (ie one in each hand) almost all the weapons in the inventory, including shotguns. and rocket launchers. Phase 2 has also been successfully archived thanks to mechanics that dance smoothly between old and new.

The pains of the young AI

The "fauna" of Nazi enemies is characterized by a certain variety of troops that can be faced, which alternate simple slaughter meat with increasingly armored and heavily armed soldiers. Usually the Reich units are accompanied by a couple of Generals, in charge of keeping radio contact with the base and requesting reinforcements: whether you decide to continue silently using the splash of stealth mechanics present or instead take the situation a little 'over the top priority is to eliminate the generals in order to isolate the rest of the enemies from their army and finish them undisturbed. The artificial intelligence of these will be able to cause those who play some headaches, thanks to the regeneration system described above, but the amount of damage they are capable of inflicting does not hide some (using a technicality) blunders, especially when dealing with simple guards armed only with truncheons who rather than give the alarm walk towards the player and are easy prey to the his knife. The Blitz War then comes to a halt at Phase 3 and a trench warfare takes place.

The art of war

On the technical front, the product defends itself well, thanks to an essentially omnipresent fluidity that guarantees a fruition of the work in terms of history and gameplay without any problems whatsoever.. This stable framerate is possible even in the light of a fairly subdued graphic rendering, with the presence of some texture that is not too defined and, in general, of an environmental realization that is not overly detailed. The acoustic side, on the other hand, reveals a good soundtrack and above all a successful Spanish dubbing that lives up to the beautiful words spent above regarding the narrative and scenographic aspects of the title.


Verdict 8/10 Daddy's home Comment Wolfenstein: The New Order manages to bring a single player shooter into the homes of players that, in addition to giving importance to the narrative sector and giving inspired dialogues, manages to convincingly propose old and new mechanics of the genre , mixing and altering what the first person shooter was and what it became. The only defects to report are a subdued graphic rendering, however backed by an always fluid technical sector, and the AI ​​of the enemies that tends to be unreasonable in some circumstances. Summing up, the war bulletin talks about a product that is probably not historically important as its illustrious progenitor, but it is certainly fun and successful. In one word: recommended. Pros and cons ✓ Level storytelling and script
✓ Excellent mix of traditional and new mechanics
✓ The Talent system works
✓ 60 fps stable and 1080p ... x ... Obtained by sacrificing greater graphics
x The AI ​​of the enemies

Do you want to be a video game expert and know all the tricks, guides and reviews for your video games ? Holygamerz.com is a group of video game fanatics who want to inform you about the best tricks, guides and tips. We offer you the best information to be a reference in gaming, so here you can find guides, tricks, secrets and tips so you can enjoy your games to the fullest. Are you ready to get all the achievements of that game that you resist so much? Enter now and enjoy your favorite video game to the fullest!
Shantae Review: Risky's Revenge - Director's Cut ❯

Add a comment from Wolfenstein Review: The New Order