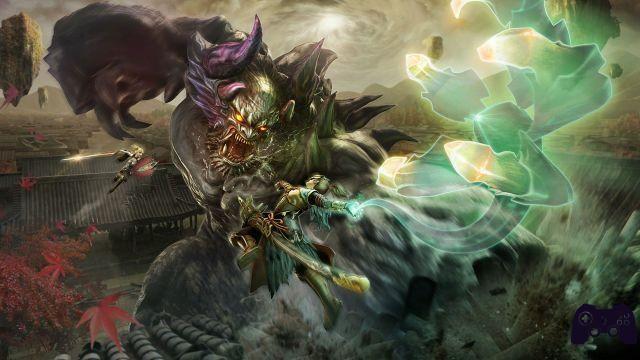 The Oni have come out, there is no longer any reason to act in the shadows. Exterminate them!

Two years have passed since the European release of Toukiden: Kiwami, the hunting game of Omega Force which winked at Capcom's Monster Hunter but which set a story full of successful and engaging characters on fire. On March 24th the world of Slayer returns to PlayStation 4, PlayStation Vita and PlayStation 3 with Toukids 2, further detaching itself from the monster hunter brand. We spent ten hours in the new village of Mahoroba and, although it still seems too early to give an overall judgment on the title, we are ready to give you some first impression on the new features brought by the Sekiguchi team.

The cast for now is not up to Kiwami

Unfortunately, the efforts made by the Slayers in Kiwami have been in vain, because the Oni, two years after the end of the events of the first chapter, manage to cause a new Awakening, this time on a large scale, showing themselves to the people of the world in all their own cruelty. The Slayers are ordered to step out of the shadows and act for the common good, exterminating as many demons as possible. The player's avatar will then be dragged onto the battlefield, before passing out and awakening ten years later, in a village west of Utakata. Together with Professor, brilliant student of Machina technology and inventor of the Demon Hand, and a new cast of supporting actors, it will be up to the player himself to find out what happened during the Awakening and why distortions in space were created. At the moment we have only been able to witness the first two chapters of the main plot of Toukiden 2, gradually getting to know the new faces of Mahoroba, and therefore we cannot go into detail on how much the story of this new episode is better (or worse) than as seen in Kiwami, reserving every comment for the full review. However, we can anticipate that at first glance, the cast of Toukiden 2 cannot stand comparison (from a mere visual point of view) with their predecessors, resulting in something already seen or easily forgotten, except for Professor and Tokistugu , a Machina doll animated by the spirit of a blacksmith, but which in appearance resembles the Vivi di Final Fantasy IX.

If from the story side we do not break down, the first thing that catches the eye in Toukiden 2 is certainly the largest dimension of the game world. Omega Force is aiming big and definitively abandons the zoning division it had borrowed from Monster Hunter, throwing the slayers into an open world map that can be explored at will (miasma and plot permitting). Not only that, in these first areas the passage will be practically automatic, not undergoing loads except when you teleport from one area to another. The player will therefore be able to freely explore the lands surrounding Mahoroba, and delve into the Ages (the rich areas of Oni already present in the last chapter) only when he feels ready enough to face any threats. In the Ages there is also a new corruption mechanic: once you enter the area, in fact, the negative Miasma generated by the Awakening will begin to infect the Slayer, leading it to certain death if you do not return to the base in time, or if you do not find a purifying stone. Finding the stones is the only way to eradicate the miasma from the chosen area, increasing the exploratory side of the series even more. At the moment we have only explored two Ages, and we cannot assure you how vast this new world actually is, but we will certainly return to the review phase, also to decide whether the abandonment of the map divided into areas was profitable or not for Omega Force.


The other main addition to this Open World approach is the management of the plot, which will no longer be linked to the total number of missions faced, but can continue simply by going to the established place or talking to the requested character. Do not worry though: the hunting missions remain and will teleport you directly in front of the Oni, to collect materials, mitama or whatever; likewise, scattered throughout the game map, there are a handful of NPCs with as many submissions to face, and the possibility of joining CPU-controlled slayers engaged in battles thanks to the joint missions that once completed will add to your group, up to upon returning to the village, the Slayer rescue.
Group and wave missions are also back to be faced in online multiplayer: even in this case you will have a special list of hunts divided by phases, you can get help not only from casual players and your friends (who will then be added as ghosts in single player) but also by the protagonists of the story, as already happened in Kiwami. In these days we have been able to play quietly in public lobbies while we have not been able to organize private matches.

The hand of the demon

We mentioned Professor, the slayer who will be our shoulder in this new adventure, and how she invented a device called Demon Hand, the main novelty in the mechanics of Toukiden 2. Although the heart of the game remains the same as in the previous chapters, trying to merging monster hunting with Omega Force's signature musou mechanics, the team decided this time to add more meat to the fire. In addition to two new weapons, such as the Chain that will allow fast attacks to area and explosives thanks to specific kunai, and to Sword and Shield, which thanks to the circle make the player able to switch from offensive to defensive mode at any time, each Slayer will be equipped with the Demon Hand (R2) a spiritual claw able to grab not only the surrounding environment making the movements faster but making us regret the absence of the jump, but also everything related to the Oni. From the smallest demons on which you will be projected quickly (so much from having to slow down the sensitivity of the camera) to the parts of giant Oni, the Demon Hand is really useful only once you have completed the first missions, when you can equip yourself with a Mitama and add additional skills your Slayer. The Demon Hand allows not only to knock down the biggest Oni (pulling together with the other members of the group) but also has a specific bar that once filled will trigger a special blow (always with R2) with which to automatically purify a demon limb. . The possibility of equipping different mitama, the use of the Demon Hand, and the classic choice of the weapon depending on the type of player, at least apparently manage to complete the gameplay of Toukiden 2 very well, distinguishing it more markedly from the successful series by Capcom. 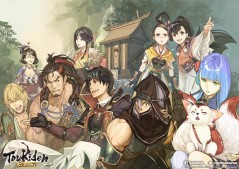 Finally, let's spend a few words on the technical aspect of Toukiden 2: at the moment we have faced very few new demons, while we have reviewed many opponents already faced in the past. As already written, also the character design of the new protagonists is not very convincing compared to what was appreciated in the past: fortunately for mitama the work of the artwork is still meticulous and well done, giving truly intriguing designs. Bad news on the other hand for the soundtrack, which at the moment almost completely re-proposes Kiwami's songs without noteworthy additions. The title is dubbed in Japanese and each text on the screen is translated only in English, therefore it is not recommended for those who do not chew the foreign language, given the strong presence of dialogues and objects.

Comment Toukiden 2 seems to distance itself further from the Capcom title that inspired the Omega Force series. The new mechanics introduced and the open world approach are convincing us, although the characters seem less captivating than those of the first chapter. This initial approach has also raised some doubts on the technical sector, especially on the soundtrack that we hope will surprise us soon. We just have to throw ourselves further headlong into the Oni hunt to be able to confirm as soon as possible the good impressions of these first hours. Pros and cons ✓ Convincing gameplay changes
✓ Solid online fund x Recycled sound compartment?
x Real longevity
x New characters unconvincing for now
Do you want to be a video game expert and know all the tricks, guides and reviews for your video games ? Holygamerz.com is a group of video game fanatics who want to inform you about the best tricks, guides and tips. We offer you the best information to be a reference in gaming, so here you can find guides, tricks, secrets and tips so you can enjoy your games to the fullest. Are you ready to get all the achievements of that game that you resist so much? Enter now and enjoy your favorite video game to the fullest!
Astral Chain preview might be the best Platinum game ❯