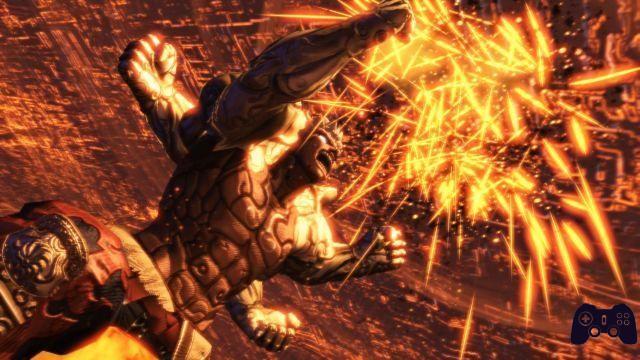 CyberConnect2, in collaboration with Capcom, brings us to know the oriental divinities in one of the most anticipated and particular titles of 2012, the very bad and angry unreleased Asura's Wrath. So let's get carried away by anger and immediately start talking about this awaited action game.

Asura is a demigod, part of the Eight Celestial Generals, who fights against the Gohma, terrible creatures that corrode Gaea (name by which the Earth is called). After a hard battle to prevent the resurrection of Vlitra (the ruler of all Gohmas), Asura is accused of the assassination of the Emperor Strada, betrayed by his companions who think well to kill his wife, kidnap his daughter and finally kill him. . Asura is reborn after twelve thousand years, thanks to the strength of his wrath, only to find a devastated Gaea and a new organization made up of fellow traitors who call themselves "The Seven Gods".
Driven only by his anger, the fallen demigod (who, as you may have guessed, will be our in-game alter ego) will try to take back his daughter, taking revenge on former colleagues.

The plot of Asura's Wrath often makes us think of yet another God of War clone but, after the first chapters (or Kanda, to stay in specific terms), we realize that we are in front of a full-fledged Anime. For the uninitiated of the term, anime are Japanese cartoons, and in Asura's Wrath there are also many citations to Japanese animation masterpieces, including Hokuto no Ken and Berserk.
As in a real anime, at the end of the chapter just played there will be a Preview (or Preview… ed) of the next one, complete with spoiler images, just as if we were watching an episodic series.
Even the gameplay is structured in such a way as to drag the player into the story, just as it attracts the media to which the title is inspired: eighty percent of the game is based on the classic Quick Time Events, actions that will be performed only if the player presses the right button at the right time, so we will be the ones to allow Asura to vent his anger with apocalyptic moves to be admired in their spectacularity. There is, of course, the action component (which actually characterizes the game, ed) where we will have to face hordes of enemies by knocking them down with Asura's combos (mostly by repeatedly pressing circle) in order to load the fury bar and activate the QTE.
The last part of the gameplay we have not yet talked about is the one inspired by a normal shooter on the tracks, where our Asura in free fall will shoot energy beams at opponents, whether they are Gohma or spaceships (!), With the sole reason of tear them down.
The fusion of these three gameplay, and the predominance of the QTEs, make this title a game to be watched in raptures, participating perhaps a little marginally in the action that is presented on screen.

Each time we finish a chapter we will receive a rating based on how many enemies we will defeat, the percentage of successful QTEs and the time taken to complete the Kanda just played with a rating ranging from the lowest E to the maximum, S.
We have already mentioned the Fury bar, which by continuing in the game and satisfying certain evaluations we will be able to enhance and "customize", thus giving it various benefits, or malus, to our hero (for example, there is the "Astral Protection" bar which increases by a lot of defense, or the "Mortal" bar which reduces their health).
This slightly raises the replayability of the game which, unfortunately, is not as long as expected. The 18 main Kandas flow as fast as a merciless river and, although there is a special Kanda (unlockable by taking 5 S ratings), the game is completed in just over 10 hours.
In addition, Capcom has already announced some DLCs that will add scenes, new opponents (including Ryu and Akuma directly from Street Fighter) and above all - or, better said, alas - the epilogue of the game. Surely, for an AAA title like this, we would have preferred a worthy ending on disc… Probably after finishing the game, the angry ones will be you and not Asura anymore!

Joy for the eyes and ears

After these painful notes, it is good to reward Asura's Wrath for his skills.
Graphically the game shows itself in good shape, with the Street Fighter IV graphics engine further improved; the clashes and apocalyptic moves manage to drag the player like no other in the universe of Asura, making him the protagonist of his battles and involving him in his emotions.
To help the excellent graphics sector, we find an excellent audio sector. Good English dubbing can be replaced by much more enthralling and emotional Japanese dubbing, and the musics and arrangements of classical music pieces make it an auditory joy.

Over the course of the 18 Kandas you will grow fond of charisma-rich characters, hate many others and share Asura's anger at what they did to him, just like in a real animated feature film. At the end of the secret chapter you will probably be furious about the cliffhanger but, if like myself you are a lover of the genre, you will end up giving up and buying the "blessed" DLC.


Verdict 8/10 Do you want to put this anger under contract? Comment Asura's Wrath is a must-see title for lovers of Japanese animation, while it is not suitable for those who expected a hack 'n slash à la God of War. Unfortunately the poor longevity and the incompleteness of the ending undermine the majesty of this title, which however imposes itself in the graphic and sound sector, leaving a sense of emptiness and anger when we extract the disc from our console. Pros and cons ✓ Lots of visual action
✓ Majestic audio compartment
✓ Characters characterized "divinely" x "Too few combos in the action sections
x Final playable only with a DLC
x Not very long-lived

Do you want to be a video game expert and know all the tricks, guides and reviews for your video games ? Holygamerz.com is a group of video game fanatics who want to inform you about the best tricks, guides and tips. We offer you the best information to be a reference in gaming, so here you can find guides, tricks, secrets and tips so you can enjoy your games to the fullest. Are you ready to get all the achievements of that game that you resist so much? Enter now and enjoy your favorite video game to the fullest!
Postal 4 No Regerts Preview: Dude, don't get your hands on ❯

Cyberpunk 2077 review, review of an old RPG that would like to tell the future