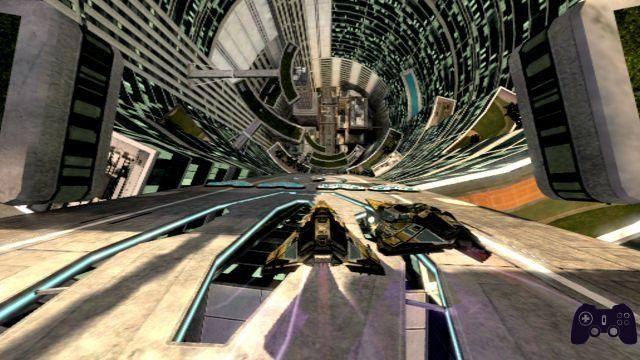 August 2012, XNUMX. For many gamers this date means nothing. For others, on the other hand, for all those virtual pilots passionate about futuristic racing on anti-gravity spacecraft, this date most likely marked the end of a really important Sony brand. On that day it closed definitively the SCE Studio Liverpool, originally Psignosis and responsible for the famous enemy number one of F-Zero, title from which the study took much more than a cue: WipEout for PlayStation. Before he died, however, Studio Liverpool gave us a final chapter of this series on PlayStation Vita. Was it the swan song?

The classic that never tires

Year 2048, or a few years before each chapter of the series. On PS Vita we will be immediately greeted by an introductory sequence that will show us the imaginary evolution of racing, starting from the Formula One vehicles of the sixties, passing through the current F1 single-seaters, up to the futuristic vehicles protagonists of the entire series. Without too many frills it turns out to be the introductory menu that, visually clean and clear, will introduce us in less than we say, so to speak, in the world of futuristic racing. Unfortunately, the first thing we will have to deal with will be the loading time required to start each event which, despite the corrective patch, sometimes corresponds to about a minute of waiting. Which, while not representing a huge flaw, is not really a good business card for a title whose usability is linked to a portable console. After the wait, however, the loading times will be only and exclusively a bad memory in the face of the goodness that the game offers us in all its entirety. PS Vita in hand, Wipeout 2048 is certainly a jewel of playability and the most experienced players will immediately feel at home, warmly welcomed by a fluid control system, fast and flawless in the response. The "gravitational thrust" is entrusted to the R dorsal key, the air brake to the square and the steering pad, obviously. The controls of the small Sony console are of excellent quality and are really precise and accommodating for anyone. The experienced driver will immediately become addicted to the classic gameplay of the series and will begin brushing curves at supersonic speed with extreme fun and great fluidity. As a rule, in the various tracks, through the x and circle keys, we will be able to take advantage of the various enhancements, both offensive and defensive, scattered here and there and all useful and indispensable to our sole purpose: victory. On the other hand, those who find themselves immersed in the world of WipEout for the first time, will have to deal with impeccable controls, but with a gameplay of the series, at the beginning, not exactly easy to master. Making the most of the accelerator, steering and air brake will take a few hours of practice. To the classic control system, on PS Vita is added the possibility of giving commands via the touch of the console and steering using the gyroscope. This option turns out to be very approximate and the use of the uncomfortable gyroscope to steer will absolutely not guarantee the same fun or the same precision of the more traditional analog and certainly will not positively affect the aficionados of the saga.

Alone or in company

Moving on to the game modes we will find the single career divided into three trophies, the online mode, ad-hoc and the interesting cross play. The first mode is the backbone of the game. Here, by participating and winning the numerous events that this offers us, we will unlock new tracks and new vehicles to fly for a total of ten tracks and twenty spacecraft belonging to five manufacturers. The races that make up the career are of different types such as the classic race, the time trial mode, the now known zone mode where as the distance traveled increases the speed of our vehicle, unable to decelerate, and the chaotic events increase. combat where the primary aim will be to get points by damaging as many enemy vehicles as possible. The online mode, structured in a similar way to the single player mode, but with different objectives to be completed, works well and cases of lag are very rare. Even the cross-play mode, which will allow us to play with PlayStation3 users in possession of WipEout HD, is technically solid and free of problems that can undermine its playability. The real problem with this, however, is represented by the literally empty servers, in fact, to try it, I had to resort to friends in possession of WipEout HD.

A pleasant song, but not enchanting

Savoring WipEout 2048 piece by piece, one cannot fail to notice how this is a well cared for product in every single component. The graphics department is certainly not outdone thanks to the explosion of bright colors that come alive on the PS Vita screen, excellent lighting effects, good textures and thanks to high-impact and very well-detailed scenarios in which the different tracks are broken down. . Unfortunately the track design, between more successful circuits and others a little less, suffers from ups and downs and we move from more and less technical sections well blended together in the most convincing circuits, to tracks that are really too undemanding with some flat sectors. In some tracks, some parts, fortunately few, are confusing. Another flaw lies in the thirty frames per second which, although granitic, fail to give the adrenaline-pumping sensation of speed experienced in WipEout HD on PlayStation3. Moving on to the sound, here too we will find ourselves at home thanks to a soundtrack in pure WipEout style and therefore composed of electronic music pieces that help galvanize our synapses. As usual, there are many big names in the sector such as Chemical Brothers, Prodigy, Future Sound of London, Noisia, in short, even on the soundtrack front the guys from Liverpool studio did things as they should. Summing up the title, WipEout 2048 is a well-made video game, well cared for in every detail and that will be able to entertain old-time fans and new fans of fast and frenetic arcade racing. Some defects mentioned above between the lines of the review, however, contribute to not making this episode the best of the series. A beautiful title, but which does not enchant in every note and which should instead have represented a farewell in a great and unforgettable style, capable of enclosing and celebrating for the last time the essence of a videogame series that has made the joy of millions of adults, teens and children from 1995 onwards.

Verdict 8/10 Sprints and rockets, between buildings Comment WipEout 2048 is, as already said several times, a good game. Unfortunately, however, the choice of setting the races between anti-gravity vehicles in the future past, has helped to make the title lose that futuristic and fantastic atmosphere of which most of the episodes of the saga were full of it. The purity of psychedelic colors and the fascinating science fiction settings we were used to, have here given way to tracks that try to combine the classicism of contemporary and gray American metropolises such as New York and Los Angeles with flashes of the future belonging to the DNA of a more classic WipEout. The mix of these two ages, although technically successful, fails to surprise as other far more ancient episodes of the series have been able to do and, what a little more serious to the eye of the most loyal fans, the "futuristic" and clear sections "Wipeoutiano" mold fail to achieve neither the quality nor the emphasis of those of the best chapters of the series. The only two exceptions will be found in the last trophy of the single player mode, where Altima and Sol will show themselves in all their beauty with breathtaking jumps and curves, from empty stomach and dizziness. Despite this, the quality is there and the playability is really excellent, moreover, to date the title can be recovered for very few euros. I would do it for a ride. Pros and cons ✓ Excellent graphics sector
✓ Galvanizing soundtrack
✓ Flawless classic controls x Track design that suffers from ups and downs
x 30 frames per second
x Sometimes too long loading times

Do you want to be a video game expert and know all the tricks, guides and reviews for your video games ? Holygamerz.com is a group of video game fanatics who want to inform you about the best tricks, guides and tips. We offer you the best information to be a reference in gaming, so here you can find guides, tricks, secrets and tips so you can enjoy your games to the fullest. Are you ready to get all the achievements of that game that you resist so much? Enter now and enjoy your favorite video game to the fullest!
Special With the pad in hand: sales rankings from 15/5 to 21/5 ❯