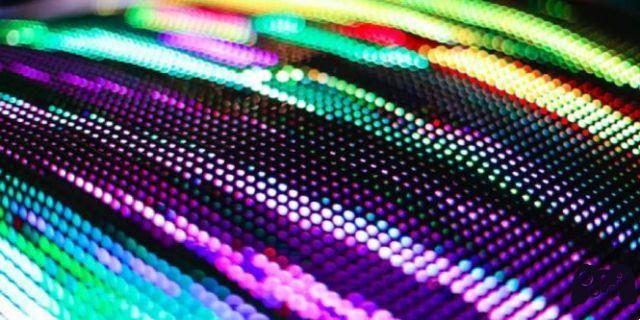 How MicroLED technology could change the future of TV and cinema. MicroLED is a video display technology that employs microscopic-sized LEDs which, when placed on a surface of the video screen, can produce a viewable image.


Each MicroLED is a pixel that emits its own light, produces the image and adds color. A MicroLED pixel is made up of red, green, and blue elements (referred to as subpixels). The MicroLEDs can be illuminated, dimmed or activated or deactivated individually.

MicroLED technology is similar to that used in OLED TVs and some PC monitors, portable and wearable devices. OLED pixels also produce their own light, image and color and can be individually adjusted or turned on or off.

However, although OLED technology displays excellent quality images, it uses organic materials, while MicroLED is inorganic. As a result, the ability to produce OLED images decreases over time and is susceptible to “burn-in” when still images are displayed for long periods of time.

MicroLEDs are different from LEDs currently used in LCD TVs (includes LED / LCD and QLED) and most PC monitors. The LEDs used in these products and similar video displays do not actually produce the image.

Instead, LEDs are just small bulbs positioned behind the screen, or along the edges of the screen, that pass through the LCD pixels containing the image information. Color is added as light passes through additional red, green, and blue filters before reaching the screen surface.

MicroLEDs are much smaller than the LED bulbs used in LED / LCD and QLED TVs.

How MicroLED is used

MicroLED displays are mostly used in commercial applications but are slowly becoming available to consumers via a special order (you can't just go to your local Best Buy or order one on Amazon - yet).

MicroLED promises a lot for the future of video displays. It offers long life with no burn-in, high light output, no backlight system required, and each pixel can be turned on and off allowing for absolute black viewing.


These capabilities push the boundaries of OLED and LCD video display technology. Additionally, the modular building stand is practical as smaller modules are easier to make and ship, and they assemble easily to create a large screen.

On the flip side, MicroLED is currently limited to large screen applications. Although already microscopic, the current MicroLED pixels are not small enough to provide 4K resolution in small to medium-sized TV and PC monitor screens, but Samsung is marketing a 75-inch diagonal screen size option for home use capable to view 4K resolution images. Larger screens may display resolutions of 8K or higher depending on the number of modules used.

Apple is also making a concerted effort to integrate MicroLEDs into portable and wearable devices, such as cell phones and smartwatches. However, reducing the MicroLED pixel size so that devices with smaller screens can display a viewable image, while cost-effective mass production of the small screens is certainly a challenge. If Apple succeeds, you may see MicroLED flourish in all screen size applications, replacing both OLED and LCD technologies.

As with most new technologies, the cost of manufacturing is high, so MicroLED products are very expensive (prices are not generally provided publicly), but will become more affordable as more companies come together and innovate and consumers buy.