What is a blockchain and how does it work? 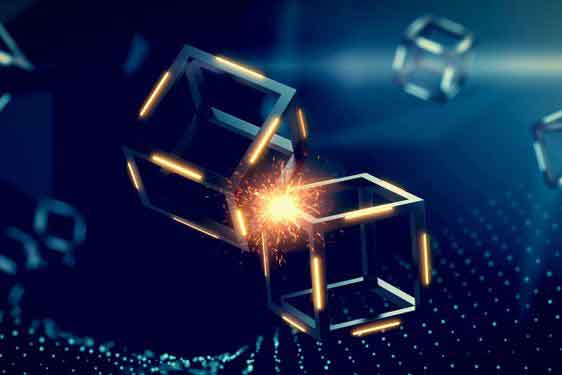 
This article will give you an introduction to what blockchain technology is and how it works, all in a thousand words. By the end of this browser page, you'll have everything you need to keep figuring out if you're interested or just following the news.

How does a blockchain work?

The term "blockchain" paints a practical picture of how the technology works. Imagine a chain of interlocking blocks, a bit like a series of paired railway carriages. It is a fairly simple image. But, in the case of blockchain technology, what are those blocks made of and what links them together?

The "block" is essentially just a collection of information. For most readers, the blockchain use case you probably hear about most often is cryptocurrency. In the case of cryptocurrency, the data stored in each block are transactions made using that currency.


If you want a comprehensive understanding of blockchain technology, the Bitcoin Whitepaper is a great place to start, as the original technical paper that introduced blockchain technology to the world. What makes blocks in a blockchain special is not the data. It's the shot. In addition to the data, each block:

A nonce is a number that a computer generates as it does the work of cataloging the rest of the data in the block. Reaching the nonce for a block generates a timestamp, just like the timestamp on a digital photograph. The nonce that ends one block doubles as the hash that begins the next block.

You may have already pieced together where the “chain” part comes into play. In the train car analogy above, the nonce at the end of one data block matches the hash at the start of the next data block.


So, suppose someone wanted to falsify or delete a piece of data from a block. In the case of cryptocurrency, this would allow someone to delete the record of having made a particular transaction because the data in each block is a record of transactions that have occurred since the previous block was confirmed.

To change that data, they would have to generate a new nonce, which they couldn't do because the old nonce is already registered in the blockchain, complete with timestamp. As long as people can see the blockchain and more than one person contributes to it, any data is perfectly preserved forever when the nonce is added.

How a blockchain works depends on what it does

How exactly a data blockchain works depends on who makes it and why. For example, what data is stored, who confirms it, how it is rewarded, how it is distributed and who can see the blockchain defines its use.


In most cryptocurrencies, anyone using the right software can help create and confirm the blockchain. The reward is a part of the cryptocurrency, which is generated every time a block is confirmed.

Cryptocurrency isn't the only use case for blockchain technology, and in theory, the data stored in a block could be anything. It all depends on who creates the blockchain and what they want to do with it.


In the case of the Codex Protocol, the owner of a work of art contributes items in the life of an artifact, such as changes in ownership and payment amounts. These records make up the block. The owner is not "rewarded" directly by contributing to the blockchain provenance, but when he wants to sell the work, the verifiable and immutable blockchain provenance he helped create contributes to the value of the piece.

What are the benefits of Blockchain technology?

In addition to being powerful and potentially transparent, blockchain technology can help organizations reduce processing costs and risks by crowdsourcing data storage, security and verification. Blockchains that are part of a "distributed ledger" allow individual computers to keep data without worrying about centralized servers.

Obstacles to the implementation of blockchain technology

Most of the downsides of blockchain technology come from perceptions about the technology rather than its actual implementation.


Also, as a new technology, blockchain has an air of imperceptibility. Many people understand that it's complicated, so they don't try to figure it out.

This is despite the fact that blockchain technology can be broken down into relatively simple terms that can grow with an individual's understanding, just like most other technological concepts.

There is a technological drawback to the implementation of blockchain technology, which is the cost and expenditure of energy. A large-scale application like Bitcoin requires an incredible amount of energy. Small-scale applications running and verifying a blockchain also require a lot of computing power, most of which just goes into generating the hash.

Blockchain has many uses, now and in the future

Blockchain technology is complicated for the computer, but when it comes to understanding how it works on a functional level, it's not that scary.

The blockchain is made up of blocks of data chained together by individual identifiers. This is all the average person really needs to understand.

What is a WPA2 password? I'll explain it to you ❯

add a comment from What is a blockchain and how does it work?