Is the art sector enough to make a good game?

The answer is, needless to say, No. The strength of the titles that make the artistic sector their raison d'etre is also in the gameplay or in the message. What happens when other aspects are overshadowed? We are in the hands In vain, many good intentions with too many flaws.

Developed by Friend & Foe, an independent team composed among others by former members of Team Ico, Vane is available exclusively on PlayStation 4 since last Tuesday. After four years of work, it falls into the category of introspective games, where the silent setting gives way to magnificent landscapes in Low-poly. A bit of Journey, a bit of Rime, a lot of Ico, Vane always leaves a taste of already seen.

Which wouldn't be too bad if the game worked right to the end.

In the bones of Vane is a journey of a child capable of transforming into a raven (not on command but we will get there), and the cycle of creation-destruction. In the five acts that make up the title, we will be transported to as many settings, each with a specific thread for the exploration and subsequent completion of the same. All this leads to a double ending but, on no occasion, does he manage to propose something different and emotionally engaging.

Artistically, however, quite the opposite.

All the settings, on the other hand, are suggestive and manage to convey the idea of ​​both vastness and solitude, fully succeeding in the team's goal. Glimpses, landscapes and construction games could be worth a journey full of déjà-vu. To help them, an electronic soundtrack that grows as the puzzle begins to be solved. This makes Vane's landscapes silent for most of the time, but capable at any moment of overwhelming the player with the background music crescendo. An excellent move by Friend & Foe, which confirms the goodness of the technical aspect of the title. 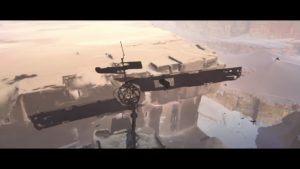 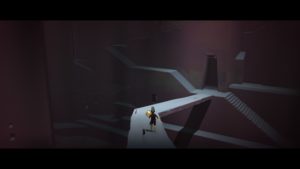 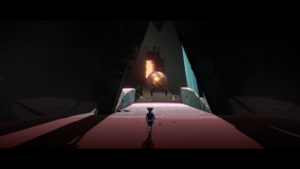 Problems begin to surface as soon as we take command of the crow for the first time.

The heaviness of the controls is combined with a camera that is too slow, which is unable to follow the movements of the bird, especially when we decide to slip into canyons or closed spaces. Much of the time spent in the raven's feathers will see us busy adjusting the view. This combined with the inability to turn into a child at will, makes the sections in flight the heaviest part of Vane. Our protagonist will be able to transform from human to bird every time we throw ourselves from a certain height, while the opposite will be possible only with the presence on the screen of a specific element.

After a short prologue with linear exploration, Vane catapults us into the desert, where in the form of a crow we will be set free. The feeling of freedom, mixed with the dancing camera, will continue once we have regained human form, taking us to another place and offering us environmental enigmas in the meantime. Until then Vane knows he has already seen it, but it remains a fairly tasty dish.


Then the penultimate act begins. 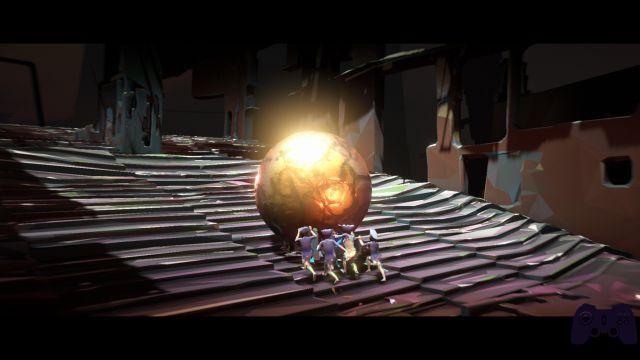 The aim will be to bring a special sphere to the end of the zone, with the help of other children. I am not going to tell you what the sphere represents and what it is capable of doing, but once unlocked, you will have to be careful because the title will start to "glitch" in the most absurd ways. Before Chapter 4 I had already been the victim of intersection bugs or crazy cameras, but pushing the giant sphere I ran into three game-breaking, which forced me to restart the title.

The problem is that Vane has no checkpoints. Returning to the main menu means starting the whole act over.

Exploring the area too much could therefore turn the time spent into dust, forcing you to start pushing the globe from the beginning. Getting it stuck in impossible-to-reach places could trap you in a loop between baby and crow that can only be reset by restarting. And so on, in avoidable problems only by knowing which path to take. In fact, on the fourth attempt, avoiding the exploration of the place, I managed to dodge the terrible glitches, much more dangerous than the storm from which the child tries to escape. 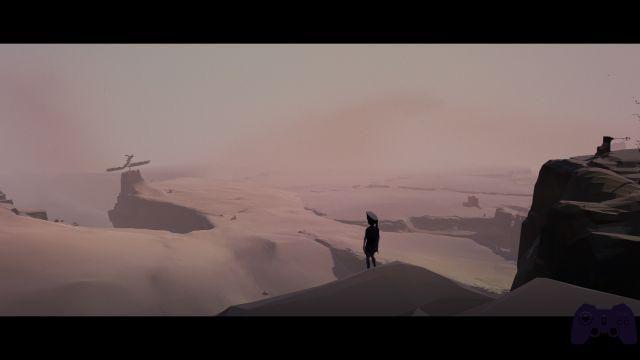 A shame after four years of development. Vane then seems to recover in the last act, recovering what was lost in the previous one but regaining that charm of already seen in the past. The final chapter puts us in front of a choice, after having explained to us, only with the power of images, the nature of the game world and of what populates it.

Interesting but not enough to convince us to let go of the flaws of the trip itself.

Verdict 6.5 / 10 Take the art and put it aside Comment An excellent artistic sector and a more than worthy soundtrack are not enough to make an unforgettable title. Vane tries to grab what Journey, Ico and Rime have done in the past, but he doesn't shine with any idea of ​​his own. An introspective recycling tour whose artistic aspect is saved, but which suffers from an annoying camera and occasional glitches and bugs. Friend & Foe put their good will into it, and that made Vane a title to spend an afternoon in and not much more. Pros and cons ✓ Good atmosphere
✓ Great use of the soundtrack x Various bugs and glitches
x Camera to be reviewed

Do you want to be a video game expert and know all the tricks, guides and reviews for your video games ? Holygamerz.com is a group of video game fanatics who want to inform you about the best tricks, guides and tips. We offer you the best information to be a reference in gaming, so here you can find guides, tricks, secrets and tips so you can enjoy your games to the fullest. Are you ready to get all the achievements of that game that you resist so much? Enter now and enjoy your favorite video game to the fullest!
News Darksiders III: gameplay on environmental puzzles ❯

Add a comment from Vane review, the art of recycling