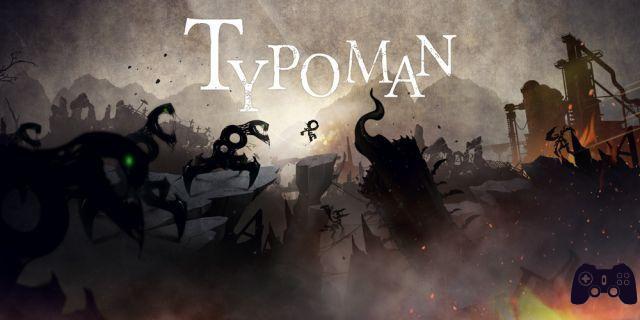 During the last E3, Nintendo launched the possibility, for those who could not attend the Los Angeles event, to try nine independent titles that would be released in the following months on Wii U. After Runbow, Freedom Planet and Extreme Exorcism, it's the turn of Typoman: puzzle-platform developed by Brainseed Factory and distributed by Head Up Games at a starting price of 13,99 € (€ 11,49 until December 19th for those who downloaded the demo).
Will this new independent Wii U exclusive manage to enchant us?

Typoman is based on words, yet there are no dialogues

Typoman tells the story of a young hero, composed of four letters (HERO) and in search of his lost arm, apparently the only hope to eradicate the evil that afflicts the world in the form of demons (also composed of letters). Brainseed Factory packs yet another clash between good and evil, but leaves the narrative part completely to the player. It is funny, in fact, that on a game that bases its very existence on words, the protagonists have no voice, and there are no lines of text or dialogue between heroes and villains. However, Typoman's spotlight is always on words, and the journey of the HERO will depend on the player's knowledge of the English language (in our italic case) and on the latter's ability to solve puzzles and anagrams.

Typoman takes advantage of the asynchronous gameplay of Wii U, relegating the anagrams to the Gamepad and the game action only and exclusively to the TV screen. In fact, on the controller screen, new riddles will appear from time to time to be solved, using the letters scattered around the environment or creating them using special machines: once the set of characters has been approached, just press X to be able to anagram them (always on the Gamepad) and solve the question, bringing more or less serious changes to the game environment. For example HERO can make it rain (RAIN) or dry a lake by approaching a D (DRAIN) and thus guarantee a safe passage; or use a P to transform GAS into GASP and breathe clean air. 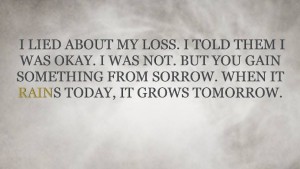 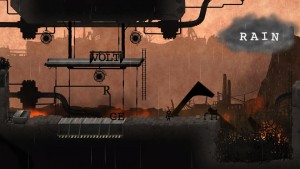 The riddles are undoubtedly meant for native English speakers, but the team meets the foreigners by highlighting, after a certain amount of time, a key word within the sentence, so as to give a clue to the player or directly suggest the answer. All in a crescendo of difficulty that will gradually re-propose variants of the puzzles already faced by leveraging on the experience acquired by the player previously. Unfortunately the frenetic and suggestive adventure of Brainseed Factory ends in just over four hours, leaving the player stunned and with the desire to tackle new puzzles based on the lyricist.

Four leaps in the vocabulary

You don't just play with words

Typoman is not only composed of puzzles, however, HERO will in fact make use of his jump (B) and the ability to grab objects such as levers and obviously letters (ZR) and lift them on his head and then relaunch them (A). The anagram of the letters also affects the counterattack against the demons, HERO is unarmed and his only defense will be to find the opposite word that cancels the opponent and in case to escape from the clash. The player will then have to overcome platforming phases more or less between one puzzle and another, trying to avoid obstacles and bad falls, otherwise the hero will be destroyed and the return to the last checkpoint. Luckily Brainseed Factory was all too generous with the restore points, making Typoman all too easy and therefore completable even after a long series of more or less stupid deaths. To the short duration is added the almost zero replayability, given by the absence of collectibles and by the one-way solutions of the puzzles, thus aggravating the biggest defect of the title. Having made the mistake clear, there are no other criticisms for the two genres protagonists of Typoman, capable of complementing each other and guaranteeing, albeit briefly, one of the best independent experiences of 2015.

On a stylistic level Typoman manages to fascinate

As we have already written, in Typoman there is no form of dialogue, and everything is left to the music that makes up the excellent soundtrack, able to pursue the player when he is in danger, or to grant him a moment of serenity. in the march before the credits, and obviously the behavior of the protagonists on screen. Stylistically Typoman makes letters his strong point, sowing clues or describing the environment with the appropriate words (for example a shotgun composed of the letters SHOOT) a successful and impactful design choice, unfortunately during some phases there are occasional frame drops, but nothing inconvenient or annoying . The environments blend with the music and offer intriguing atmospheres, each with its own characteristics, such as the hallucinogenic forest where HERO will have to reach safe points without being hit by the syringe branches, otherwise a full-screen distorted effect.


Verdict 8/10 The pen hurts more than the sword. Comment Typoman is a great product. An excellent mix of genres that manages to entertain the player with stimulating riddles, taking advantage of the letters that populate the game world. Unfortunately, the whole experience can be completed in just over four hours, and given the one-way resolutions of the puzzles, Typoman owners will hardly complete the title a second time. Despite being short, Typoman is intense and never leaves room for dead moments, giving in any case one of the best independent experiences of Wii U. Pros and Cons ✓ Stylistically inspired
✓ Pressing soundtrack
✓ Well thought out gameplay x Damn short
x Almost zero replayability
x Some occasional frame drops

Do you want to be a video game expert and know all the tricks, guides and reviews for your video games ? Holygamerz.com is a group of video game fanatics who want to inform you about the best tricks, guides and tips. We offer you the best information to be a reference in gaming, so here you can find guides, tricks, secrets and tips so you can enjoy your games to the fullest. Are you ready to get all the achievements of that game that you resist so much? Enter now and enjoy your favorite video game to the fullest!
Special Waiting for The Last of Us Part II: the coherence of violence ❯

Game of Thrones Ep. 3 - The Sword in the Darkness