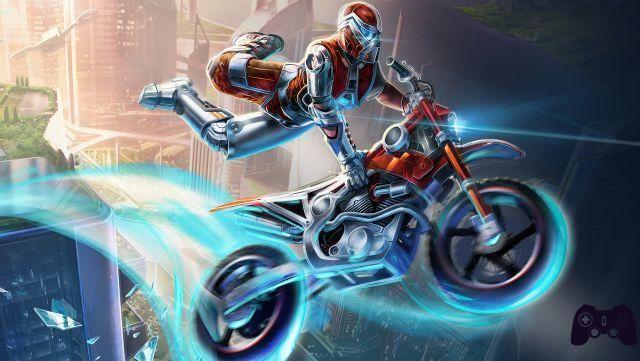 If there is one thing that can be learned from the RedLynx story, it is that commitment always pays off in the end. Founded fourteen years ago, the Helsinki team first made itself known with the first Trials (which starting as a browser game then gave life to a real franchise that has five chapters only with the main series) and then arrived in 2011 to be acquired by a colossus like Ubisoft, passing through a apprenticeship lived mainly on the unfortunate Nokia N-Gage and then on the PC. Under the protective wing of the transalpine software house, the Swedish developers, two years after the last chapter released, debut their historical series on the new generation of consoles, touching among other things for the first time a platform signed Playstation.

A question of balance

From the point of view of the naked and raw played Trials Fusion does not differ much from the tradition of the series, offering the classic solid and run-in gameplay washed down with a few touches of arcade, then seasoned with some novelties. The player is then placed in front of (literally, given the position of the camera) cross tracks, to be completed in the shortest possible time trying to bring the driver to the finish line without abusing the "respawn" offered by the check-points in case it crashes to the ground or loses its grip on the vehicle. The controls entrust the accelerator to the R2 trigger, while L2 takes care of the brake management and the burden of keeping the rider in balance by acting on his position in the saddle falls on the left analog stick, also used for the execution of flips and backflip while in the air. The rest of the stunts, new in this chapter, are also performed using the right stick, which allows the execution of some typical Freestyle Motocross figures (taking into account the position and inclination of the bike, adjustable as mentioned thanks to the other lever. ).

The inclusion of the tricks taken from Freestyle Motocross, absolutely in the background and indeed almost a hindrance during the "classic" races, involves the introduction of new types of races within the playful package: in addition to the traditional challenges in which the goal is to complete the track in the shortest possible time and by falling out of the vehicle the bare essentials (where as mentioned, the use of stunts involves nothing but extra risks and remains absolutely in the background) Trials Fusion offers competitions where the aim is is to cross the finish line unharmed by accumulating as many points as possible thanks to the execution of tricks, which together with the Skill Tests they put new petrol in a tank that otherwise, having arrived fourteen years after the first chapter, risked running out of news on the playful front. Further longevity is inserted by the all-arcade touch with which the rankings enrich the offer and, if the search for the gold medal and the best time were not enough for the "sick of the challenge", by the challenges included in each race, sub-objectives that range from finishing the race without ever falling and never letting go of the accelerator to discovering some hidden secrets on the track. Part of the party is spoiled by the idea of ​​leaving a single "slot" for each set of competitions for these more particular events. (9 in all), which partly overshadows its "scenic value" ...

... Or at least, it would if it weren't for the introduction of the path editor. In fact, where RedLynx has somewhat (it should be said) pulled the brake from a numerical point of view with regard to some facets of the experience, it has on the other hand set up a powerful infrastructure on the community front, which thanks to the powerful editor and the ability to play, vote and share with others the tracks created with this tool it definitely goes beyond the inclusion of online rankings and makes Trials Fusion damn long-lived and varied. There is also a multiplayer mode (only local, at least for now), which however is actually the most limping leg of the offer: some tracks of the main campaign are in fact re-proposed, with the addition of parallel "lanes" that allow a maximum of 4 riders to compete on the same track. Problems arise whenever one of the drivers falls out of their vehicle, as this loses the chance to play until someone reaches the next checkpoint (thus causing the "knocked down" driver to respawn at that point in spite of the fact that he did not tackle a part of the track), with the consequence of perhaps seeing the victory blow at the last control point despite the fact that he raced better than the opponents (even if in any case the score takes into account both the position and the mistakes made during the race). Apparently inexplicable design choices that would have made a lot more sense and a whole different flavor if the focus of the multiplayer mode had been Freestyle rather than the actual race.

The charm of the track

From the point of view of level design, the idea of ​​setting the game in an unspecified future is certainly guessed, which allows you to mix more classic tracks made of mud and dunes with futuristic tracks based on explosions, ramps and spirals that appear on the screen almost suddenly, giving the feeling that the track is in a certain sense "alive" and in any case giving a truly impressive glance. Glance that goes well with the clean and fluid graphic rendering of the product, which except for some loading that may be a bit too long and some textures that take a few seconds to "focus" (always succeeding before the race starts) shows a technically successful title on the screen. The sound also puts its own and accompanies the player very well already starting from the menu.


Verdict 8.5 / 10 Soaring Comment Trials Fusion marks a crackling debut for RedLynx's flagship series on next-generation machines. The weight of the years that the series now behind is practically canceled by the innovations (both in terms of circuit and actual gameplay) made in this new chapter, and the only major flaw on the content front is abundantly compensated by the valid editor put available to developers, leaving at least for now only the multiplayer mode on which to complain. Ultimately, it is a product that puts a lot of meat on the fire both for fans of the series and for newbies, thanks to a proven formula on which surgery has been carried out in this next-gen re-presentation. Pros and cons ✓ Proven gameplay
✓ Level design guessed it
✓ The news works
✓ The track editor x The multiplayer (local only) is less successful than the rest of the offer
x A few loads too many

Do you want to be a video game expert and know all the tricks, guides and reviews for your video games ? Holygamerz.com is a group of video game fanatics who want to inform you about the best tricks, guides and tips. We offer you the best information to be a reference in gaming, so here you can find guides, tricks, secrets and tips so you can enjoy your games to the fullest. Are you ready to get all the achievements of that game that you resist so much? Enter now and enjoy your favorite video game to the fullest!
News Minecraft: Story Mode - Season Two, trailer for episode 3 ❯