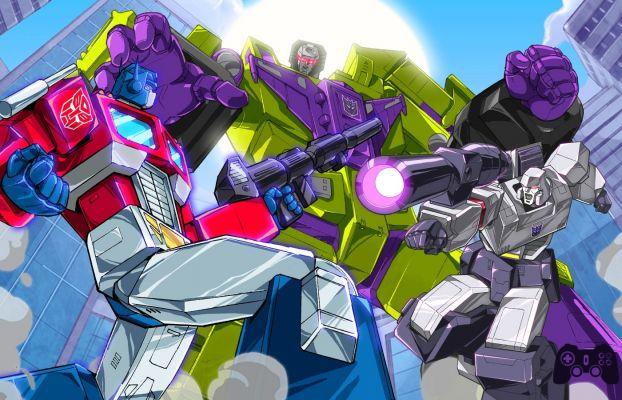 The videogame counterpart of the robots Hasbro has had decidedly ups and downs over the years: from tie-ins inspired by Michael Bay films to the incomplete prequel trilogy of High Moon Studios, through titles inspired by the latest animated series, the Transformers have passed into the hands of countless teams of development. With Transformers: Devastation, available from last October 9th for PlayStation 4, PlayStation 3, PC, Xbox One e Xbox 360 at a price of € 49,99, the war between the Autobots and the Decepticons passes into the hands of Platinum Games (under the guidance of Kenji Saito), transforming the gameplay into an action hack 'n slash with elements already seen in other titles of the development team. Will they be able to give the right energy to the Ark of Optimus and companions?

Autobot versus Decepticon and some Insepticon

When the city is invaded by the Insepticons, Optimus and the autobots join the fray to save it, soon realizing that Megatron and the Decepticons are once again behind the chaos generated by the new robots. In the seven chapters in which Transformers: Devastation is divided, you can freely decide which team member to control between Optimus Prime, Bumble Bee, Sideswipe, Wheeljack and Grimlock. The story will not undergo changes and for most of the short duration of the title you will be accompanied by your companions, both physically and on the screen with jokes and advice. The journey to save the earth from cyberformation will take Optimus and his companions to four different locations and back, providing the player with a sort of freedom of exploration in the city stages. Unfortunately, once the final battle has been reached, there will be little to do for non-completists, who will find themselves putting aside the new effort of Platinum Games after five hours full of fights between robots. For lovers of collectibles and challenges, however, Saito's new title still offers a lot after the credits. 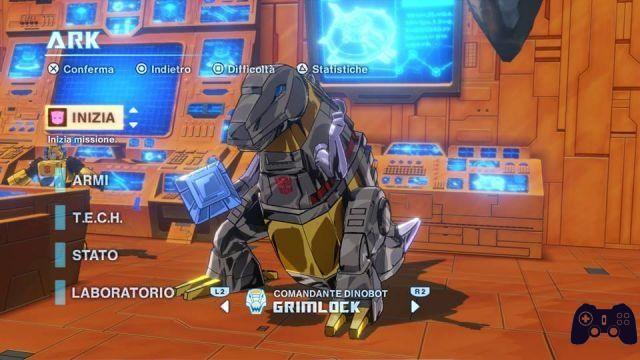 For players who aim to complete the new experience with Hasbro robots to the maximum, simply access the Ark between one chapter and another, or through the portals positioned on the map. In the base of the Autobots it will be possible to change characters, difficulties, face up to fifty challenges and above all upgrade weapons and equipment through the practical synthesization menus (which we will talk about shortly). Although the campaign therefore lasts about five hours, the title is highly replayable, both for the difficulty and for the gameplay that is different from time to time between the five Autobots.

Transformers: Devastation is a hack 'n slash Platinum Games style, there are many references to the gameplay of the other titles of the team, among which the most obvious are certainly the Focus mode, which thanks to the pressure at the last moment of R1, allows you to dodge the blow and activate a time slowdown in which you can devastate the opponent (just like in Bayonetta) and the parry, which can be carried out by moving the left analog in the direction of the blow (as happened in Metal Gear Rising) precisely for these technical aspects, the gameplay of Transformers: Devastation deviates from the simpler one seen last year in The Legend of Korra, and manages to give satisfaction to the Robottoni fans, with adrenaline-filled battles and ratings based on player performance. Obviously, in addition to the attack keys to alternate to score the physical combos (with white weapons such as swords, axes, hammers or simply punches) the Autobots will be able to count on their vehicular form (or Jurassic for Grimlock) and on the attacks with charge, executable once reached maximum speed and capable of breaking enemy defenses. Not only that, each Autobot has two unique techniques available, one purely physical that can be activated with L1 (for example Wheeljack can use a shield) and another devastating with L3 and R3, which can completely change the tide of a battle by inflicting as much damage as possible (provided you have filled the appropriate bar).

The Autobots are also experts in firearms, and with L2 and R2 they will be able to aim and shoot at distant enemies, at any collectibles or shoot down Decepticons transformed into planes. Each weapon has a rank and its own stats, and can be synthesized with any other collected during the campaign or obtained as a reward from challenges. The higher the difficulty level, the greater is obviously the number of weapons and the degree of the latter. Unfortunately it is possible to merge only two weapons at a time, greatly slowing down the time spent in the Ark workshop and perhaps too often breaking the rhythm of the battles. In addition to weapons, in the Ark it is possible to buy new moves and create HACK chips. Through a minigame, the latter will be able to provide bonuses to the Autobot's statistics. Each hero in the service of Optimus Prime has a different number of equipable HACK slots. As in our own productions, also in Transformers: Devastation Platinum Games has focused all its efforts on gameplay, to satisfy both fans of Hasbro robots and lovers of the genre. 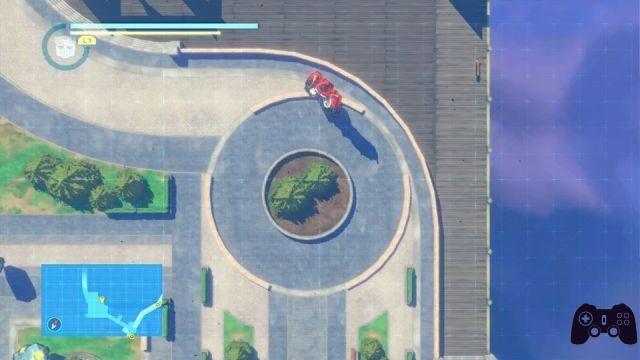 The sound sector of Transformers: Devastation is as usual impeccable, Optimus Prime is again and obviously voiced by Peter Cullen, his voice for thirty years now. If the audio is in English, the title is fully translated into Spanish with regards to the texts and menus, offering a complete experience for anyone who can read.We found no frame drops and every battle runs smoothly, although the from time to time he does not shy away from making some whims. The visual sector and the new character design of the characters is also convincing and does not suffer when coupled with the technical gameplay of Platinum Games, giving a real 3D cartoon with which to interact and have fun. Unfortunately, the environments and the destruction rate really reduced to a minimum pay the price, in addition to the corridor explorations that bring the Autobots from one part of the city to another without a real sense of freedom.

Verdict 8/10 Have you ever wondered what happens when a Truck meets a Super Jet? Comment With Transformers: Devastation Platinum Games manages to fully meet expectations, after the failure with the last licensed title last year. Kenji Saito gives the Autobots a dynamic and complete gameplay, which goes to fish from the best productions of the team and goes perfectly with the "cardboard" game graphics. Unfortunately, the campaign does not even last six hours, although the title is highly replayable for lovers of Hasbro Robots, other players will perhaps find the price at which Devastation is offered too high. A real shame given the actual quality of the game that we are sure will give more than one satisfaction to Hack 'n Slash fans. Pros and cons ✓ Impactful gameplay
✓ Successful Character Design
✓ Original dubbing x Duration of the campaign negligible
x Price perhaps too high
x Exploration reduced to the bone
Do you want to be a video game expert and know all the tricks, guides and reviews for your video games ? Holygamerz.com is a group of video game fanatics who want to inform you about the best tricks, guides and tips. We offer you the best information to be a reference in gaming, so here you can find guides, tricks, secrets and tips so you can enjoy your games to the fullest. Are you ready to get all the achievements of that game that you resist so much? Enter now and enjoy your favorite video game to the fullest!
Bridge Constructor Portal Review ❯

Immortal Fenyx Rising review, the legend of a squire