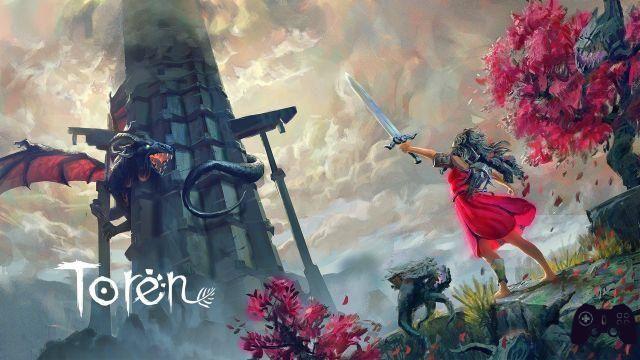 It is not new that the independent panorama, thanks to its being less tied to the "economic" logic of the market, has often taken the risk of daring and experimenting: if in 2001 ICO was practically a white fly fourteen years later the titles that focus on the emotional component (even at the cost of sacrificing something at a strictly playful level) are no longer so poorly represented. However, there remains a terrain on which it is not easy to move: the Brazilians of Swordtales with Tower, released today on PS4 and scheduled for arrival on PC via the ubiquitous Steam. The outcome? Read and find out.

I do not want the moon

Dragons, swords and towers up to the skies: these are the ingredients of Moonchild's journey

Toren vaguely takes inspiration from the myth of the Tower of Babel: in their arrogance, men have decided to build a tower high up to the sky, in order to reach the moon. To take the place of the vengeful God, however, the Sun himself intervened, cursing the world by making an endless day fall upon it. The only survivor is Moonchild, the protagonist of the game, who, following the voice of a mysterious old wizard, must climb the tower built by man, Toren, and abandon his childhood to fulfill his destiny, defeating the dragon that inhabits the tower. and restoring the order of things. During the climb, in fact, Moonchild (and the player with her) will suddenly go through all the stages of growth, starting as a newborn to come to blossom as a woman at the end of the experience.

Taking up a bit what was one of the hallmarks of Team Ico's works, the explanations are always reduced to the bone, and therefore the narrative component is limited to saying what is necessary and leaves those sitting on the other side of the screen free to interpret.

If the parallel with the two titles by Fumito Ueda has a certain raison d'etre as regards the narrative aspects of Toren, things are quite different on a playful level: like Ico, the Swordtales product essentially focuses on puzzles and enigmas (even the phases in which you run into the dragon are actually puzzles, a little more frenetic but without ever leading to the action), but the choice of never offering the player anything excessively complicated sacrifices a bit the purely playful value, clearly putting the emphasis on the "narrative character" and on the artistic component of the title (which we will discuss in more detail shortly). The "main patterns" are also roughly very similar to each other, with the result of giving the whole a certain repetitiveness. In general, therefore, the progression is quite linear, while still carving out some space for the exploration of some areas of the tower given the presence of some (secondary) objects that can be collected by Moonchild to earn their respective trophies. Also on the longevity front there is something to report: the game can be completed, at least for what concerns the first run, in about a couple of hours, and while presenting a certain replayability (both thanks to what was said before on exploration and thanks to the choice of the developers to allow you to select at will which chapter to replay) therefore shows a bit the side also from this point of view.


Moon reflected in the well

The artistic component of Toren, except for some elements on the screen that are not always well rendered like the rest of his "scenario brothers", he defends himself really well and manages to give in the course of the two hours required to complete the experience "in the first place" truly suggestive and well-made glimpses, absolutely in line with the atmosphere of the title and with the choice to focus on the emotional aspect of the story of Moonchild. Even technically in general, there is very little to report, with the exception of some truly sporadic and decidedly negligible slowdown.

Verdict 7/10 Brazilian, but without the surprise Comment Net of the somewhat risky comparison with the works of Team ICO, Toren shows some uncertainty on the enigmas front which together with a not very high "first-rate" longevity prevent Moonchild from leaving a more marked trace in the player's heart. In any case, if you have appreciated the works of Fumito Ueda and / or titles where the gameplay is not all the effort of Swordtales could be for you, also thanks to the price with which it is proposed. Pros and cons ✓ Artistically suggestive
✓ Affordable price
✓ Very replayable ... x ... But not very long-lived
x Repetitive puzzles
x Some sporadic slowdown

Do you want to be a video game expert and know all the tricks, guides and reviews for your video games ? Holygamerz.com is a group of video game fanatics who want to inform you about the best tricks, guides and tips. We offer you the best information to be a reference in gaming, so here you can find guides, tricks, secrets and tips so you can enjoy your games to the fullest. Are you ready to get all the achievements of that game that you resist so much? Enter now and enjoy your favorite video game to the fullest!
The Council Review: Complete Edition - Thirteen Little Indians ❯