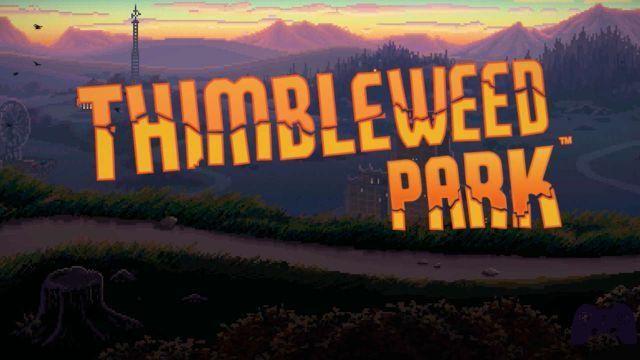 Or at least this is what the authors of Thimbleweed park, sacred monsters of the caliber of Ron Gilbert e Gary Winnick. that with the Terrible Toybox team and the precious help of the Kickstarter community, brings to PC, mobile and console screens a graphic adventure with a retro soul and the charm of a golden era that made the history of the videogame genre .

The premise is simple: five protagonists, a murder in a suburban town that has seen better times, and a command interface with attached inventory to solve the case. From here on, things can only get crazy, in the typical style of the (was) glorious Lucas Arts.

Back to the past

Set in the year 1987, Thimbleweed Park takes its name from the homonymous city that is the backdrop to the events. With a past at the cutting edge of technology, thanks to Pillowtron 3000TM technology invented by the genius and local tycoon Chuck Edmund, the town now lives in a quiet but constant decline, following the fire of the Edmund family factory. To shake up the lives of the locals a little is an unscheduled murder: a mysterious corpse, found along the banks of the river, initiates the investigation of federal agents Ray and Reyes. Possible suspects include the cursed clown Ransome (a former "professional insultor" who has fallen into misery, whose dialogues abound with censorship * beeps *), video game developer Delores Edmund, nephew of the now deceased Chuck, and his father by Delores, Franklin.

Right from the start, however, Thimbleweed Park suggests that there is more than a mystery to be solved, starting with the same agents investigating the case. The player, as he progresses through the story and meets the rest of the colorful cast, is responsible for shedding light on this background. To do this, we will have to step into the shoes of one of the gods from time to time five protagonists (the aforementioned Rey, Reyes, Ransome, Delores and Franklin), each endowed with their own abilities and the ability to exchange items. This aside an annoying backtracking trend, allows players to maintain a simultaneous presence in multiple locations. A mechanic that, combined with a very creative level design, gives way to generate a vast number of puzzles and tell a story of various mysteries and intrigues in a relatively small area.

And this is just the first of the many touches of class that Gilbert and Winnick bring into play in what is a real videogame time machine ... 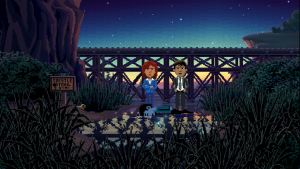 Beyond the fourth wall

Since its premise (the 80s setting, the retro interface and the graphics worthy of the Commodore era), Thimbleweed Park does its best to deliberately ignore the thirty years of evolution videogame. This gives the game a look that nostalgics will no doubt appreciate, and the 15000+ backers on Kickstarter prove it. However, this "return to the past" does not only play on nostalgia: the narrated plot integrates these choices, and transforms them from simple occasions to break the fourth wall into a real need for gameplay.

Gameplay itself is what gains most from this voluntary "downgrade": going back thirty years, Thimbleweed Park demonstrates that there is still room today for a system that, despite its simplicity, allowed for puzzles as complex as they were intriguing to be fielded. As well as many of its illustrious predecessors (to which the new work by Gilbert & Co. winks several times) of the caliber of Monkey Island and Maniac Mansion, also Thimbleweed Park is an apotheosis of "thinking outside the box". 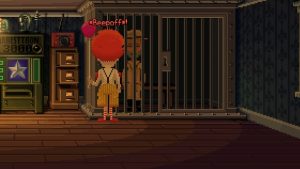 The in-game inventory is vast, and recoverable items are not always necessary, or have immediate use. Locations offer multiple points of interaction, which sometimes vary depending on the character we currently control. In other cases it is required to act "in a chain" by first activating an action with a character in one location, and moving on to another in a different area to complete the sequence. Unfortunately, the downside is that the logic behind an enigma is not always clear, indeed: sometimes we will have to make real mental journeys into the absurd to understand what consequences an action can have ... Fortunately, as in the old classics LucasArts, we will never find ourselves facing unsolvable situations, and often it will be enough to pay (very) attention to what surrounds us to have clues on how to proceed. 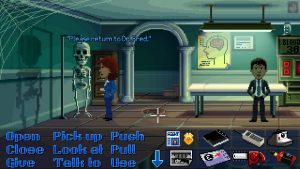 The best of both worlds

You may have noticed that in this review we have repeatedly quoted the late LucasArts. Of course, by now the "dream team" that had given us classics like Monkey Island, composed by Tim Schafer and Ron Gilbert, has disbanded, but the atmosphere evoked by Thimbleweed Park is exactly that. They range from the friendly rivalry that existed at the time with the Sierra adventures (mentioned directly in the game), to a whole series of cultural references of the late 80s, passing through a brazen self-referentialism to other products at the time under the aegis of LucasFilms, such as Star Wars and Indiana Jones.

Despite everything, Thimbleweed Park is clearly a modern game

Now, it is true that with thirty years on his shoulders, many of these quotes are in danger of getting lost along the way, but it was a risk worth taking. First of all because it is never too forced references for nostalgic purposes only: everything fits smoothly into the story, without ever overshadowing it for the benefit of a joke. Then, and here we are talking mainly for those who lived that era firsthand or felt its influence anyway, because it distracts attention from all those improvements that make Thimbleweed Park is clearly a 21st century game. The illusion of the 80s, in fact, holds up until you notice those details that, for technical reasons, we could not have thirty years ago (and it is history itself that leads us to do so): a sensational high quality dubbing, which combined with the splendid characterization of the characters, gives Thimbleweed Park the best of both eras.


It would be all too easy to dismiss the protagonists as comic strips (which they are anyway), or to categorize certain supporting actors as stereotyped. As the story proceeds, however, a depth emerges that hardly had "two-dimensional" characters like Guybrush Threepwood or the protagonists of Maniac Mansion (of which Thimbleweed Park is a sort of alternative sequel). Especially in the final stages, the effort of both the writers and the voice actors is evident, especially in the character of Ransome, expressive and credible even with all his * beeps * and his groans.

Verdict 9/10 Say hello to the * beeps of the '80s, * beeps * of * beeps * Comment If you've grown up on bread and graphic adventures, this review is not for you: you already know that Thimbleweed Park is a game of the highest quality. For all the others, however, it remains a title that it would be criminal to miss, however there are some things to be made clear: firstly, many of the jokes must be contextualized, it is impossible to think of understanding all the breaks in the fourth wall, the references and the easter eggs hidden in the game without a minimum of experience in graphic adventures, and especially in the history of LucasArts. Second point: the final stages. The story of Thimbleweed Park itself is the greatest antagonist to the sense of satisfaction typical of a game's ending. The plot is built in such a way that it is constantly growing until the final twist, and while taking the right space to give a closure to everything, it still leaves you wanting to know more. It couldn't have been otherwise, of course, and that's not bad either (how many games can say, nowadays, to be able to intrigue their players from start to finish?). The fact remains that no ending could have lived up to all the assumptions and expectations that we could have had in the game. Pros and cons ✓ Creative puzzles and level designs
✓ High quality dubbing
✓ Nostalgic charm x Frequent backtracking
x Some unclear puzzles
Do you want to be a video game expert and know all the tricks, guides and reviews for your video games ? Holygamerz.com is a group of video game fanatics who want to inform you about the best tricks, guides and tips. We offer you the best information to be a reference in gaming, so here you can find guides, tricks, secrets and tips so you can enjoy your games to the fullest. Are you ready to get all the achievements of that game that you resist so much? Enter now and enjoy your favorite video game to the fullest!
Nex Machina Review ❯