The Walking Dead: Michonne- Episode 1: In Too Deep review 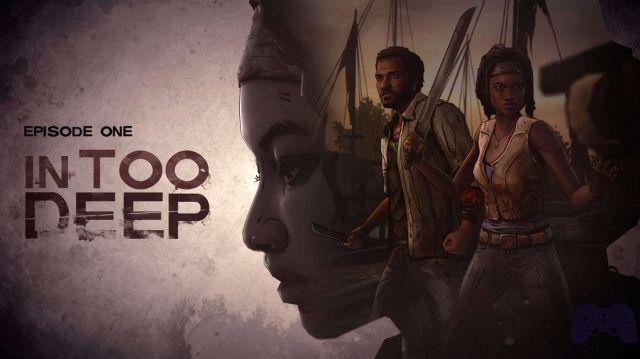 While we are still waiting for the last episode dedicated to Minecraft: Story Mode, the tireless guys of Telltale have released the first chapter of a new series dedicated to the brand that made them discover them to the general public: The Walking Dead.
The Walking Dead: Michonne - A Telltale Miniseries will be a trilogy, and the season pass is available for purchase at 14,99 € on PlayStation 4, PlayStation 3, PC, Xbox One, Xbox 360 and mobile devices. Let's find out how this new adventure begins in the first episode "In Too Deep".

The following review contains spoilers about the events narrated in the main edition of The Walking Dead.

Like the previous series too The Walking Dead: Michonne - A Telltale Miniseries is set in the world of The Walking Dead comics, but this time it touches a character much loved by fans and is placed in a very specific point in the story told by Robert Kirkman: the war with Negan has just ended and has claimed many victims, Michonne in full emotional crisis, moves away from the group of Rick and the other survivors, soon being surrounded by walkers (the walkers), on the verge of despair the swordswoman from ebony skin is about to commit suicide when stopped by a man (and by the player who can choose whether to pull the trigger or not).

The entire trilogy is therefore to be considered canonical to the paper work, and will narrate the events that moved Michonne away from number 126 to 139 (the entire first post-time skip cycle), the swordswoman will face a new group of survivors, the Monroe community willing to do anything to recover their supplies.
In Too Deep it takes less than an hour, laying the foundations both on Michonne's past and on the new characters introduced: unfortunately, if on the side of the protagonist the work was almost perfect (every sentence and dialogue option seems written by Kirkman) the supporting actors are almost completely insipid and lacking of bite. All this adds up and makes In Too Deep flat and above all without a cliff hanger capable of making you want the next episode (which we remember will be released in March).

Between choices and beheadings

Under the gameplay side, In Too Deep does not differ from Telltale productions on the contrary, it tries to further accelerate the movement phases, limiting them to the passage between one scene and another and leaving room for multiple choice dialogues. Being a first episode, we cannot confirm if by tradition, the choices made in this chapter will be truly influential in the next ones, or if, as already seen in Game of Thrones or in The Walking Dead 2 itself, nothing will change at the epilogue of the adventure . Space also for Quick Time Events, which follow the action already seen in the other episodes dedicated to the Kirkman series, leading Michonne to death in case the right button is not pressed at the appointed time. Everything is still very easy and suitable for every type of player, to be able to enjoy the plot without too many worries of a game over.

In Too Deep does not differ from the graphics engine and cel-shaded style used in the other releases dedicated to The Walking Dead produced by Telltale. In addition to the comic, as a basis for Michonne (and as a voice) she was used Samira Wiley (Orange is the New Black) making the swordsman the best thing in production also from a technical point of view. Telltale has done a great job with the sound sector, giving off the right tracks (especially in the opening and closing credits) and managing to transmit that bit of anxiety necessary to keep the player glued and attentive.


Verdict 7/10 Mehchonne Comment In Too Deep opens The Walking Dead trilogy dedicated to Michonne in a cautious and silent way. There are good ideas for the next episodes, but it all ends too quickly to justify the immediate purchase of the Season Pass. Fortunately, the extreme care given to the swordswoman designed by Kirkman manages to bring home some of the loot, but it is still too little to fully promote this miniseries. The appointment with Michonne is now postponed to March, with the second episode Give no Shelter. Pros and cons ✓ Good characterization of Michonne
✓ Some discreet plot points
✓ Sound sector cured x Limited duration
x Supportive still dull

Do you want to be a video game expert and know all the tricks, guides and reviews for your video games ? Holygamerz.com is a group of video game fanatics who want to inform you about the best tricks, guides and tips. We offer you the best information to be a reference in gaming, so here you can find guides, tricks, secrets and tips so you can enjoy your games to the fullest. Are you ready to get all the achievements of that game that you resist so much? Enter now and enjoy your favorite video game to the fullest!
News + Sunlight: how to save the environment by living a unique experience ❯

Add a comment from The Walking Dead: Michonne- Episode 1: In Too Deep review