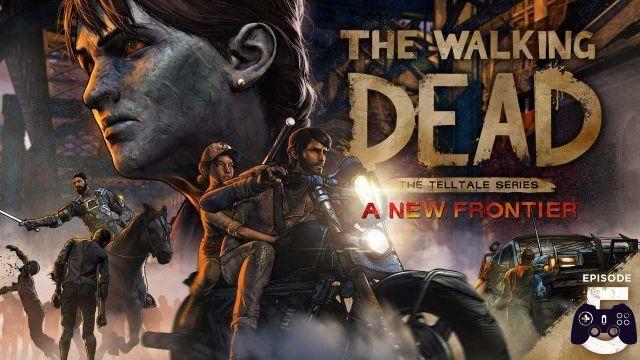 And once again, we have come to the conclusion: the third season of what is currently the longest running series among TellTale's episodic titles has come to an end, with the fifth episode, "From the Gallows", which is preparing to pull the strings of a journey that lasted almost six months. A journey made of ups and downs, often more the latter, accompanying the Garcia family through various hardships, physical but also (and above all) moral.

In six months we have seen family relationships grow and mature, not always idyllic between Javier, our protagonist, and the various supporting actors, but always with in mind the fixed idea that A New Frontier was an atypical season, and in many ways a more personal and introspective journey than its predecessors. To date, it has been the playability, and at various points also the narrative of the events, taken in the midst of a crossfire of personal emotions and forced decisions.

Still, the narrative tension was enough to bring us to this culmination of events. Now the question is: was it worth it? Maybe yes, but a little ...

As is now tradition when it comes to episodic release titles, in this review we will refer to the events of the first four chapters. We will try to limit any spoilers on the plot of From the Gallows.

BROTHER, WHERE ARE YOU?

The last episode in this troubled season opens with a flashback that brings back Salvador Garcia, the father of Javi and David, last seen in the opening episode. From this brief but important moment (perhaps the most successful, if vaguely cliché, flashback), we will have the last piece of the Garcia family mosaic, as well as a clue of what we will see in the episode.

Finally, in fact, The Walking Dead: A New Frontier it comes towards that catharsis between brothers that we had hoped for from the first episode. A catharsis that can be positive or negative, based on our choices, but which nevertheless exists and it is undeniable that, at least from this point of view, TellTale has had an eye on it.

LITTLE ELEGANT NARRATIVE CHOICES HAVE BEEN MADE

But what is out of place is that, to get to this point, they were operated on inelegant narrative choices: apart from the moments of open-hearted discussion (more or less "animated"), David's personality fluctuates widely between the poor devil and the crazy bipolar. If in one moment we are dealing with a soldier who sees battlefields everywhere, the next moment there could be a sudden realization, on which we can build a decidedly touching scene, or give vent to those feelings of repressed frustration that the game offers us. The options of choice are not lacking, however the hint is that they are placed there above all to give way to demonstrate Javier's personality, not so much that of his supporting actors, who in any case follow a behavior on tracks, even at the cost of seeming absurd.

An example? Over the course of two scenes, we will see the protagonists several times reversing their roles in ideas, between leaving, leaving Richmond at the mercy of the apocalypse, and saving its inhabitants. Definitely not the best to see on screen, especially with a story that makes the psychology of its protagonists its strong point. 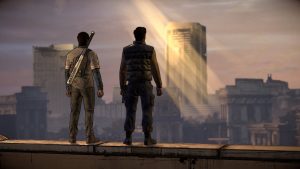 EVERYTHING TURNS AROUND ME ...

The trouble, once again, is to be found in an extreme focus on a certain narrative line, which pervaded the entire season and which never comes to the surface as in “From the Gallows”. Constantly putting the spotlight on the Garcia family and making the whole world revolve around it, it forces players to have their choices on events relegated to simple comments, almost notes of color to take note of and then forget forever.

Compared to the past, our control over events is terribly close to zero (although, fortunately, the narrative climax of From the Gallows allows more freedom and takes into account some choices made in previous episodes). Reiterating several times that you are against certain plans will not convince the other supporting actors to go over to our side, nor to give up on their own intentions. The maximum that we are allowed is a small cosmetic variation to the scene: this or that secondary character will be with us, the tone of the discussion will change slightly from resentful to compassionate, but very little else. All of this, even at the cost of contradicting the logical thread of the NPCs' reasoning, which, as in the case of David, mentioned above, suffer from a constant "Binary syndrome“, Aimed at making even contradictory choices to advance the story, nullifying many of the choices made so far by the players.


The real problem, however, comes out when we have to deal with "important" deaths, of characters characterized and with a certain weight in history. Unlike in the past, the entire season, and especially this last chapter, seems to want to remove every bit of pathohe knows any death that does not have to do directly with the Garcias, liquidating everything in seconds and "happily" returning to his own path - sorry, binary. The result is an abrupt change of mood that doesn't do justice to either the characterization of the NPCs or the player's sense of emotional satisfaction. Which, however, in all this, almost never has the right to choose. 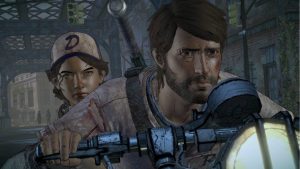 With the finale approaching, we hoped that at least From the Gallows would save himself from the terrible sense of helplessness of the other episodes, which relegates player interaction to mere quick-time events. Instead, despite the small step in the right direction taken by the fourth chapter, Thicker Than Water, it resounds back. Fortunately, the pace of the scenes in which the player is allowed to act is quite sustained, and is almost never annoying, despite being very limiting.

However, in terms of gameplay, From the Gallows has an interesting functionality, absent in its predecessors: a more or less complete recap of our adventure as Javier, in which, with a little attention, it is possible to identify which moments key to intervene, trying to obtain a different result.

The only real fixed result, after all, is the final sequence, about which we don't anticipate anything, but which, if nothing else, makes it clear in a definitive way that the opening parenthesis in basic A New Frontier is closed, and the series she is ready to return to her main story line. 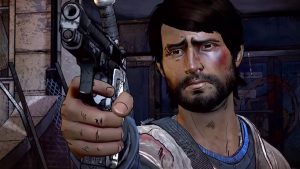 Verdict 6/10 "Anything but another Garcia!" Comment From the Gallows is a worthy conclusion to an unworthy season. There is no way to get around it: the family spin-off (since this is in fact, and this last chapter seems to do its best to emphasize it) dedicated to the Garcia family had the potential to tell a splendid intermediate story in the events of Clementine, which is increasingly confirmed as the true engine of the entire series. However, the excessive narrative focus in Javier's ties to his family made everything else just background noise. From the Gallows is not an exception, and indeed, there is the hard task of having to close the plots left open by four chapters, in a time that is absolutely not enough. The end result isn't all bad, nor the worst seen in the season, regardless of the choices made, while also providing a much needed replay value boost for the entire series. However, the idea of ​​replaying an entire series without that sense of being hostage to the plot is still quite frustrating. At this point we might as well wait for the next race, after the unequivocal message at the end of the episode. Pros and cons ✓ A closure for almost every storyline of the season
✓ Some really moving scenes
✓ Final recap that increases replayability x Narrative tracks too forced
x Fluctuating and often contradictory characterization of NPCs
x Frequent frame drops
Do you want to be a video game expert and know all the tricks, guides and reviews for your video games ? Holygamerz.com is a group of video game fanatics who want to inform you about the best tricks, guides and tips. We offer you the best information to be a reference in gaming, so here you can find guides, tricks, secrets and tips so you can enjoy your games to the fullest. Are you ready to get all the achievements of that game that you resist so much? Enter now and enjoy your favorite video game to the fullest!
Just Cause 3 preview ❯

Add a comment from The Walking Dead-A New Frontier: From the Gallows review