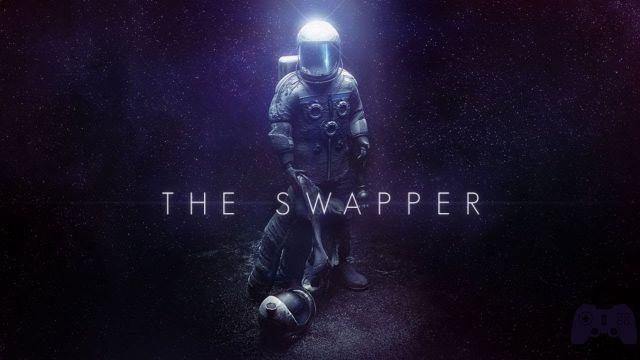 One year after its PC version, the guys from Facepalm Games also bring their famous creation: The Swapper to PlayStation 4, PlayStation 3 and PlayStation Vita. Will this unusual title, after the great success of audiences and critics on PC, also win over the owners of Sony consoles? Recall that The Swapper is available in the PlayStation Store in a cross-buy version at a price of 13,99 euros.

IN SPACE NO ONE CAN HEAR YOU SCREAM

The plot of The swapper manages, despite its indirect narration in English and told through the numerous logs scattered throughout the game, to involve and fascinate the player.
Player who will play an astronaut inside a space station (the Theseus) mysteriously without a living soul and inside which it is evident something strange has happened. Shortly after starting the game, we will discover one of its main features not only from the point of view of the gameplay, but also from the point of view of the narrative as the fulcrum of most of the "dialogues": the Swapper. This machine (which gives the title to the whole work) will allow us to transmit our soul from the body of the protagonist to that of one of the clones that, through a second device, we can create. This will involve moral reflections on one's soul and personality, but also on how just and "normal" the deaths of one's clones can be considered. We are therefore faced with a plot that, for those who manage to pass over the indirect narrative, could prove to be decidedly successful and convincing starting from the excellent beginning up to the surprising ending. It must be said that, unfortunately, between the beginning and the end it will not be long as The Swapper suffers from a fairly poor longevity that will allow you to complete the title in just over 5 hours.

BE A CLONE OR NOT BE A CLONE, THIS IS THE PROBLEM!

As mentioned earlier, the Swapper is the main focus of the gameplay of the Facepalm Games title. In fact, it will be possible to create up to four clones that, once materialized, will imitate our movements in perfect synchrony.
Synchronicity that we will have to use to overcome obstacles, press switches, and solve puzzles as the clones will not be created beyond the walls. To this already interesting element in itself we must add that we will find some areas within which there will be blue and red lights which, respectively, will prevent us from creating clones and carrying out the passage of the soul from one body to another. . All these features make The Swapper a puzzle game with two-dimensional platform elements capable of satisfying any user who is looking for a title capable of entertaining and amusing without ever becoming boring and frustrating thanks to puzzles that, thanks to a never excessive difficulty, are always stimulating and satisfying.

STILL LIFE IN THE DEAD SPACE

Technically, The Swapper manages to convince thanks to bare and disturbing landscapes which, mixed with areas within which the presence of human beings is still palpable, transmit to the gamer an oppressive and, almost, uncomfortable feeling. The soundtrack also blends perfectly with the visual aspect and contributes, thanks to the absence of music in certain scenes and the slight presence of orchestral pieces in others, to create a unique atmosphere that you will not easily forget. Too bad for the animations of the protagonist which, despite the lack of importance within the title, are not as curated as the rest of the production and immediately appear woody. Compared to the PC version of last year it must be said that, unfortunately, no additions have been made and that the title does not use either the DualShock 4 touchpad or the audio coming from the controller.

Do you want to be a video game expert and know all the tricks, guides and reviews for your video games ? Holygamerz.com is a group of video game fanatics who want to inform you about the best tricks, guides and tips. We offer you the best information to be a reference in gaming, so here you can find guides, tricks, secrets and tips so you can enjoy your games to the fullest. Are you ready to get all the achievements of that game that you resist so much? Enter now and enjoy your favorite video game to the fullest!
Google Stadia special: because it's time to grow ❯