The new trend of fpv drones for speed racing 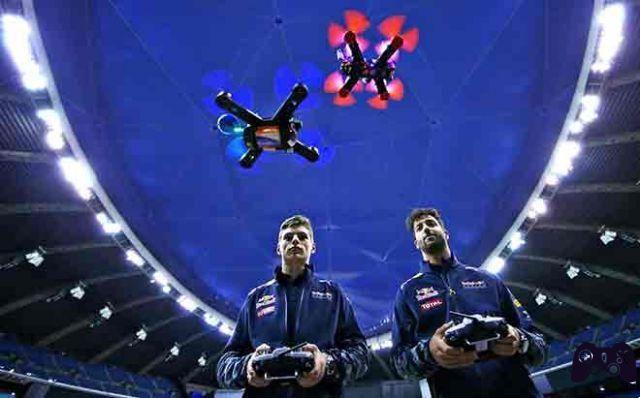 A trend phenomenon abroad for several years, but which is also taking a turn in Spain are the competitions of FPV drone, which attract numerous model aircrafters and hobbyists in the sector.


The great passion for drone models meant that real drone races could be born based on the "First PersonView" flight to be able to put the small drone models to the test.

I drones used for competitions are absolutely designed according to the competitions, that is essential quadcopters but they integrate the FPV driving system.

Drone competitions are particularly widespread in the world, while in Spain, despite the rules governing the flight of drones are rather strict, there are several events organized in the area, and which have attracted many enthusiasts from all over.

During the competitions, the pilots themselves position themselves in front of special pavilions that can guarantee greater safety, so that they cannot be hit by the quadcopters whizzing in flight at high speeds.

The entire circuit to ensure a greater visual impact to the public is marked by cones, flags and gates in order to be able to follow a real path in the air. They are called FPV Drone Racing the demonstrations that see very powerful drones whiz between various obstacles and winding paths.


And the mini drone races are arousing a lot of success among fans of the sector, a great interest that has spread like wildfire around the world and is also taking a turn in Spain.

But what are FPV Drones?

The term FPV associated with drone races would be the acronym of "first personviewOr pilots who, with the help of a viewer, allow you to experience the flight firsthand.

FPV drones are mini drones equipped with this particular driving system, which would allow pilots to be able to see what happens during the flight of their drone, just as if it were on board it.


After several years spent trying to stabilize the image in flight, today, thanks to the spread of the phenomenon of drone races, an opposite trend is being experienced. So much so as to significantly improve the shooting and the potential of FPV drones in flight during competitions.

This type of model allows you to perform maneuvers in flight, with higher performance speeds than other types of drone models, maneuvers such as dives, loops or black roll that are possible thanks to the greater agility of these devices, and for this very reason used for FPV racing races.

FPV drones manage to whiz at one speed of 130km / h maneuvered by a pilot who is able to personally follow the flight of the drone live through the viewer present in the drone.

Flight that is actively supported by an audience that witnesses spectacular evolutions of the devices in flight, thanks also to live streaming on the big screen.

As far as video shooting is concerned, we make use of 5 inch drones, or for greater action also devices on which additional support means are added for a better view of the flight.

The axis of the video recording exactly follows that of the FPV drone, giving the public, but also the pilot who monitors the flight of the drone, a completely unique vision.
On the market it is possible to choose between numerous models with pushed and non-pushed functionality.

for choosing the best fpv drone with viewer you can rely on both specialized sites and giants like Amazon thanks to the reviews on the various tried and tested products.

The speed racing events for FPV drones in Spain

There are several manifestations of the FPV drones for speed racing which are organized in Spain. Events that allow you to compete even on spaces of over 2.000 square meters and with medium-high difficulty levels, but above all with tracks fully equipped with multi-level light gates and sharp bends, as well as additional special effects to make it even more spectacular the scenery.


All participants in the different manifestations of FPV drones have the opportunity to follow the flight of drones in competitions via a large screen installed in the event area.

Precisely during the events and events organized it will be possible for hobbyists and fans of the sector not only to participate in the drone flight competition, but also the opportunity to view the different exhibition spaces and directly buy drones, or the various accessories of spare part for your drone.

During drone racing events it is possible to actively participate in workshops or thematic conferences dedicated to aircraft modeling and FPV drone competitions, events that in recent years also in Spain have garnered numerous acclaim among fans of the sector.

Google account has been disabled, how to reset ❯