Surprisingly announced on the night of August 27, the Mario Kart 8 DLC shocked all owners of the title for the huge amount of content at the modest price at which they were offered.
On November 13th, after being pre-ordered for more than two months, the first massive update for the King of karting games has finally become available, will it be worth spending these 8 euros?

Let's go in order to analyze the contents of the first pack, called for the occasion The Legend of Zelda X Mario Kart 8 , where the X indicates the collaboration between the two titles.
Three new characters join the thirty already present in the full game: Mario Tanooki, heavy class, Peach Cat, middle class, and the first Guest Star ever in a Mario Kart, Link by The Legend of Zelda.
Link arrives darting on the tracks of a game that does not concern him, and immediately wins the favor of all the online players of the title, in the first two days the Hero of Time overcrowded the multiplayer sector of Mario Kart 8, making it almost a Link Kart. 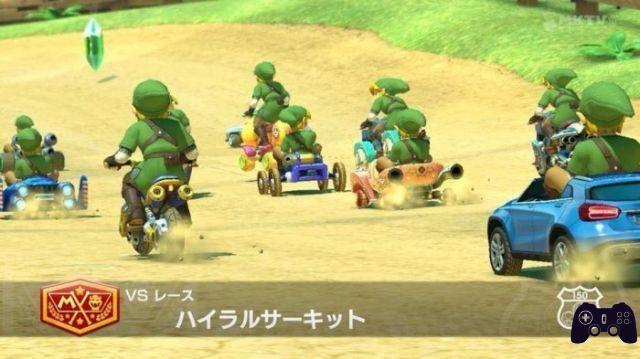 Link is a Heavy Class, it barely fits into most of the karts present, and gives great satisfaction with regards to animations and real races.
Despite being among the heaviest in fact, he manages to balance the statistics of most vehicles, making him an optimal character for both newbies and accustoms.

Duty to say a few words also for Mario Tanooki and Peach Gatto, fun to use but completely overshadowed by the new entry: the raccoon plumber and the cat princess are valid alternatives to the users of Mario Metallo and Peach.

Four vehicles, a pair of wheels and a Hyliante

The Legend of Zelda X Mario Kart 8 continues its offer with four vehicles: three karts and a motorcycle, which are added to the offer already present since May. The Blue Falcon, directly from F-Zero, and the Kart Fulmine, which made its debut in Mario Kart DS, reach the limit of legality on the track, providing above average speed and acceleration unlike the Turbotanuki, a balanced 4 × 4 and suitable for all players. But also for vehicles, Nintendo has introduced one dedicated to the universe of The Legend of Zelda: the Steed of Hyrule (or Eponator in German language) is the only Bike in the DLC, but at the same time it is the only means to have wheels and glider, or rather Hyliante, coordinated, so as to guarantee Link a complete Hyliano attitude during his crazy races in the Mushroom Kingdom. 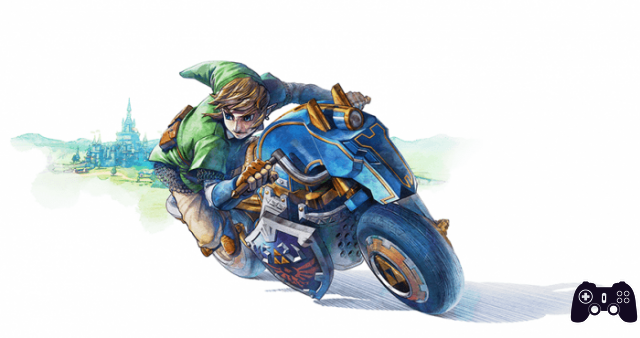 The Hyrule Steed is very similar to the Yoshi Bike although, when coordinated with the three-force wheels, it loses the comparison for acceleration.

We would have liked to show you the new tracks in eight special videos, thanks to Mario Kart TV, but unfortunately the service seems not to be available yet for The Legend of Zelda X Mario Kart 8. (Error 104-1852)

The offer continues with the real highlight of the DLC: eight new paths, divided into two new cups that can be traveled both alone and in the company of friends, locally and online. The Egg Trophy repeats the Yoshi circuit from Mario Kart Double Dash, a track in the shape of the cute dinosaur and three new courses: theArena Excite Bike, based on the game of the same name, is a huge oval with the famous hills on which players can jump to accumulate more and more speed, there are also mud spots that will slow down the vehicles; there Dragon Wall, a race with antigravity on the back of the dragon of Super Mario Galaxy 2, between dojos full of Lakitu fighters; closes the first cup Mute city, directly from F-Zero, complete with a homonymous soundtrack that drags players into a vortex of speed and antigravity, in what is probably the best path of this first DLC.


Wii U release. The Triforce Trophy it also consists of four tracks, the Wario Gold Mine from Mario Kart Wii where the fearsome trolleys have become precious allies in the anti-gravity race and Rainbow track from Super Mario Kart for SNES, which with its bright colors could cause too many epileptic attacks, becoming the third Rainbow Track of Mario Kart 8.
Two new paths close: Polar Track, a huge two-lane gymnastics full of secret passages that will test the most accurate players and finally the Circuit of Hyrule, map that revolutionizes Mario Kart 8 with Rupees instead of coins, sound effects from the series and enemies and guards taken from the kingdom of Princess Zelda. Verdict Si Shut up and take my rupees !! Comment To answer the initial question: is it worth spending 8 euros for The Legend of Zelda X Mario Kart 8? The answer could not be simpler: buy the 12 pack directly, including the next DLC, because if the quality remains this, Mario Kart 8 seriously becomes the best title of the brand. This DLC proves that you can improve a gaming experience without castrating the title at the beginning by offering additional content at a fair price. We hope the Mario Kart TV issue will be resolved soon, as it currently does not allow you to upload movies with elements of the DLC. Pros and cons ✓ Maximum attention to detail
✓ Mind-boggling soundtrack
✓ A lot of quality at a low price x Mario Kart TV not yet available
x Absence of new stamps

Do you want to be a video game expert and know all the tricks, guides and reviews for your video games ? Holygamerz.com is a group of video game fanatics who want to inform you about the best tricks, guides and tips. We offer you the best information to be a reference in gaming, so here you can find guides, tricks, secrets and tips so you can enjoy your games to the fullest. Are you ready to get all the achievements of that game that you resist so much? Enter now and enjoy your favorite video game to the fullest!
Special Night Before Exams: 10 games that haven't studied enough ❯

LEGO The Lord of the Rings review