The Evil Within review 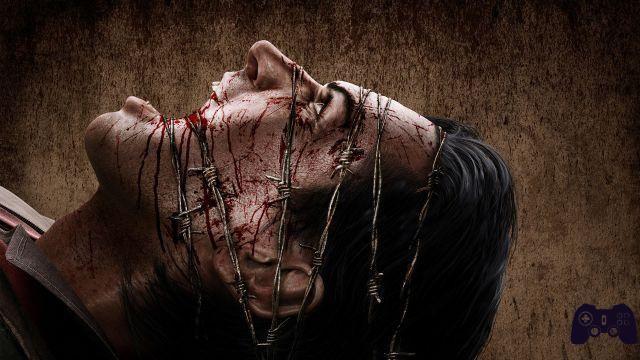 There was a lot of anticipation behind The Evil Within. The title produced by Bethesda Softworks to work Tango Gamesworks marks the comeback of Shinji Mikami, the historic Japanese game designer and father of the survival horror genre, who returns to his first love with his new work. How did this rediscovery of its origins go?

A sadistic and sick journey, made up of horrors that will put a strain on the sanity of our poor protagonist

Sebastian Castellanos is a police detective from Crimson City. A troubled past and a strong sense of duty make him one of the best men in the entire district. With his team he is called to investigate a series of heinous murders that took place inside the Beacon Mental Hospital, a mental institution that hides numerous secrets within. But the arrival at the asylum will be only the beginning of the descent into hell for Sebastian and his companions. A sadistic and sick journey, made up of horrors that will put a strain on the sanity of our poor protagonist, who will do everything to survive and discover the identity of Ruvik, the mysterious and disturbing character who wreaked havoc inside the hospital. A story that does not shine particularly but still manages to capture, with its unexpected and crazy implications, twists and an open ending and with multiple interpretations, which however fails to give an answer to all the questions asked during the duration of the game.
With The Evil Within, Mikami again tries his hand at the genre that consecrated him to success back in 1996, that of survival horror, creating a title that goes to fish with both hands from the firm leaders of the genre, creating a melting pot of events and situations capable of canceling or almost canceling the dead times. There are not a few quotes from the classics of horror cinema, more or less veiled, as well as the tributes and references to the series of resident evil o Silent Hill they will delight any enthusiast.


Drag me to hell

Frightening is difficult, fear is a subjective sensation that each of us perceives and internalizes in a different way. And Mikami knows this.

Every minute spent in the game will be experienced with anxiety, with the anguish of what could happen. Frightening is difficult, fear is a subjective sensation that each of us perceives and internalizes in a different way. And Mikami knows this. Leaving aside a few well-built cheap scare moments to literally make the player jump in the chair, the real alchemy created by The Evil Within lies precisely in its naked and raw survival nature. In the game you die, and you often die. Some would think too much. But it is precisely here that the urge to move forward is born, to understand our mistakes and find a solution to the problem, especially during the clash with the biggest and badest enemies.
Sebastian's resources will be limited, few weapons, even less ammunition. Attacking enemies hand-to-hand isn't an effective solution either, if not a way to just buy time. Approaching the game like a regular TPS might be the biggest mistake to make, as after a few minutes we would find ourselves without ammunition or probably dead. Mikami's creature asks us instead to study the environment, to exploit traps or to act silently in the shadows, circumventing the problem and saving precious ammunition. Even on a normal level, even the simplest of enemies can turn out to be a potential executioner if approached too confidently. The dynamics trial & error most of the time they are the masters, and although this kind of playful trick does not always pay off, in this context survival they acquire the right dimensionality, spurring the player to be careful, acting promptly, adapting to various situations.

Do not open that door

The Evil Within proposes a third-person structure with a camera placed behind the protagonist, in a completely similar way to what happened in Resident Evil 4. To emphasize the claustrophobic sense that prevails throughout the game the virtual camera relies on the cinematic ratio of 21: 9, cutting the view and effectively limiting the visible area. Again to identify more with the player, the game hud is also reduced to a minimum, if not canceled in some situations. The only information we will be able to receive will be that relating to our health and the ammunition available for the weapon.
It will be possible to access a menu for inventory management and combine the 4 directions of the analog cross with weapons or objects that can be used for quick access. Sebastian will be able to run, after consuming a special stamina bar or crouch to enter stealth mode, hiding from enemies to attack them from behind, saving precious shots. In the course of the game, there will not be many weapons that we will have at our disposal. We will find the classic revolver (later combined with a much more powerful magnum), a shotgun, a precision one and a slow but lethal crossbow, to which a simple crafting system on the use of arrows is linked, which will allow you to create new from the materials collected or obtained by dismantling the various traps.

Again to save precious shots, the game offers us the possibility of quickly eliminating the downed enemies by burning them with collected matches, also in very small quantities. On the other hand, which can be activated at the discretion of the player, we find a sort of enemy indicator, which provides us in a rather basic way through the icon of an eye if an enemy is nearby or if he has identified us. In the second case to us the choice to face it hard-nosed or to hide in one of the different hiding places that will be offered to us and then go around it and take it out in a more discreet way. We can also distract them or focus their attention on a certain point by throwing bottles allowing us to act behind them.

The Evil Within skeleton has a rather classic skeleton. It does not offer big news on a playful level as it does not show original elements both from the narrative side and from that of the gameplay. But be careful. Originality is not always synonymous with quality, and relying on “old” and tested mechanics turns out to be the trump card of the Tango Gamesworks title. It is true that the high difficulty compared to similar titles can create a certain sense of frustration in some players, but the game in fact does not discount and does not accept mistakes. A very often derivative gameplay, in some respects linked to "old school" solutions but in practice everything works very well, although some effort is required from start to finish.

Instead, making a technical analysis on the graphic aspect of The Evil Within, what can be seen is a situation that alternates highs and lows for the duration of the game. Excellent atmosphere, settings and polygonal models of enemies and protagonists (with the exception of some problems related to the creation of some faces). Overall, the sense of horror is savored in every moment, also thanks to the lighting system that helps make everything distressing. and decadent. The world of The Evil Within is a changing world ready to change its face in a few moments, making our certainties vanish and helping to confuse us, all with real-time effects that modify the structure and settings when we least expect it. The play of light then transforms any setting into a theater of death, embellished with particle, volumetric and lens flare effects.
Problems instead on the front of the frame rate, which usually is around 30 fps but which collapses too frequently even during the exploratory phases alone. Me too'Id Tech 5, the engine behind The Evil Within proves to be late in loading certain textures, with not always pleasant results. And again with regard to the textures we have a fluctuating quality tending to the low: especially in the contour elements or in the broader external or diurnal phases, where the various effects fail to cover this deficiency, probably due to a cross-gen development studded with some development problems.

The undisputed protagonist is the audio sector which with every noise, scream or creak helps to keep alive that sense of fear and tension that the game is proud of. The soundtrack includes the presence of Masafumi Takada, which also in this juncture offers us a splendid performance, which culminates in the closing piece, Long Way Down (with the participation of Gary Numan), which accompanies us during the credits. Also present is the complete dubbing in Spanish of good workmanship, which except for a few smudges in a couple of points can be heard pleasantly. Lovers of the original dubbing, on the other hand, will be disappointed to know that the Pal version does not contain the English adaptation but it is limited to a Multi4 (French, German, Spanish and Italian).

The Evil Within is divided into 15 chapters and to complete it at the normal level there will be nexceed 13/15 hours based on how much time you will spend exploring the environments in search of collectibles and the attempts necessary to overcome the most challenging passages.
Among the objects that can be collected we find a Green Gel that allows us to improve our skills and equipment through a machine present at the Beacon Mental Hospital and accessible to save "safe house" present in the game.
Once finished it will be possible to face the New Game +, obtain new weapons and access a new and terrifying level of difficulty. Verdict 8/10 We finished it .. WE Comment It took Shinji Mikami to put his hand again on a survival horror worthy of the name. The title Tango Gamesworks does not innovate or offer revolutionary experiences, just as it does not manage to scare as it would like, but at the same time thanks to its decidedly above average level of challenge and solid gameplay it manages to keep the tension and anxiety high in the game. player, and that's what a good survival horror should do. And in this The Evil Within is unrivaled. Those who adore the classic chapters of Resident Evil and Silent Hill will find their perfect synthesis in The Evil Within. If you are faint of heart or unwilling to repeat the same step over and over again you may want to move on to something else. Pros and cons ✓ Anxiety and tension
✓ A Survival Horror like few others
✓ Challenging at a normal level ...
✓ Top notch audio compartment x Graphically it shows some gaps
x ... for some too much
x Pretty confusing story
Do you want to be a video game expert and know all the tricks, guides and reviews for your video games ? Holygamerz.com is a group of video game fanatics who want to inform you about the best tricks, guides and tips. We offer you the best information to be a reference in gaming, so here you can find guides, tricks, secrets and tips so you can enjoy your games to the fullest. Are you ready to get all the achievements of that game that you resist so much? Enter now and enjoy your favorite video game to the fullest!
Mario and Donkey Kong: Minis on the Move review ❯

Guardians of the Galaxy Episode 1: Tangled Up in Blue review