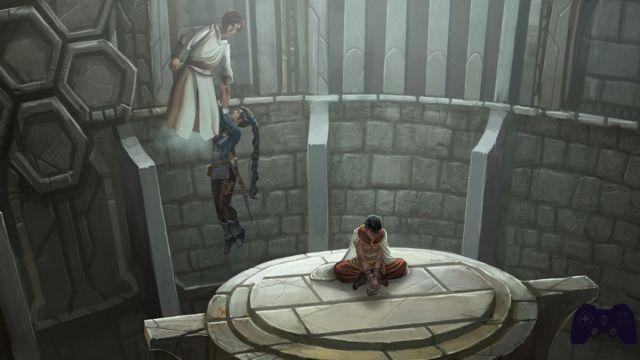 In the tide of “major” titles, presented at the end of 2013, some small pearls risk going unnoticed, especially if their playful niche is not among the most used. But never as in the case of Dedalic Entertainment, there is always someone ready to remind everyone that gaming is not just action and explosions, or complex strategic calculations. There is also room for a more dreamlike story, told with the quiet and serious rhythm of a legend of the past. And that's exactly what it is The Dark Eye: Memory puts on the plate, revisiting the setting created with Chains of Satinav, of which the title is the direct sequel.

The plot follows the events left unresolved in Chains, with the bird trainer Geron searching for a way to break the curse on his companion, the fairy Nuri, transformed into a raven. A beginning "in media res", takes us directly to the place of the apparent solution, the tent of an old merchant able to break the spell. All it asks, in return, is the solution to a puzzle. A single answer. But it is with this false sense of simplicity that the game really opens its doors and plunges us into the past, with a flight of about 450 years up to the time of Princess Sadja, the second protagonist of Memoria, thus heralding a story that will intertwine the events not only of two people, but also of two completely different eras, linked to double thread with a narrative fate. It is only at this point that the opening credits begin to flow, on a majestic graphic overview of a tomb buried in the era of Sadja.

Already from these premises, we can guess that we will be dealing with a quality title ...

As already mentioned, the first strength of Memoria is its own narrative, which connects two different eras, two characters with a dissimilar character, in a single fresco with dreamlike tones. Both experiencing Sadja's adventures in first person, and tracing her memories as Geron, has a particular charm, which brings to mind the golden era of graphic adventures (we're talking about titles like Loom, Amerzone, Beneath a Steel Sky and Broken Sword), with a decidedly creative use of the premises.

Geron is and still remains the main protagonist, while Sadja is a reflection of the past, and everything about her is lived and narrated as if it were a "second hand" experience. Although, in fact, we will have under our direct control Sadja's actions, in some chapters we will be unable to hear her words, or directly follow her actions, as we will learn those specific events from an observer's diary, and we will have to try to reconstruct the missing parts with the documents and notions Geron learned to move the story forward as Sadja. The puzzles that appear before us, therefore, are not simple obstacles to overcome, but real integral parts of the plot.

Furthermore, unlike the predecessor, in which the resolution of various situations was mainly entrusted to the use of Geron's powers of reparation, or to the interaction with the objects of his own inventory, in Memoria they also return preponderant dialogued puzzles, the resolution of which is entrusted to a series of responses in sequence. However, this sometimes also entails the need to guess a logical sequence designed by Dedalic's Germans, which is not always unique. Based only on the information gathered around, it happens in some (fortunately rare) cases of come across multiple plausible and seemingly valid answers, but only one will allow the story to continue. If we add to this that the puzzles are never excessively complex, but generally require a very high logical capacity and thinking outside the box, it can happen on more than one occasion to find yourself bogged down trying to guess the solutions. The game itself acts as a deterrent against the trial-and-error mechanism, and randomly trying multiple combinations of powers / objects / answers, often ends up just producing a bored snort from Geron or a direct reprimand from Sadja. Memory demands the use of the brain by the user with no easy way out, and is uncompromising on this point.

Fortunately, the rewards put on the table by Dedalic are also particularly tasty and satisfying as not to weigh the blocks, turning frustration into the urge to carry on. While this could be a deterrent for those looking for a faster and more immediate gaming experience, for fans of fiction, and for those looking for a challenge up to their intellect, it is certainly rewarding, and reveals an attention. to the details that reflects the one dedicated to the graphics sector.

Visually, Memoria is nothing less than a real work of art. Point. Come on sumptuous handmade backdrops, to the graphic characterization of the characters, to the perfect fusion of points of interaction with the surrounding environment, everything that appears on the screen in Memoria is the result of a meticulous and precise realization, with attention to detail worthy of a classic painting.

Unfortunately, like everything that tends towards perfection, there are defects that slightly undermine the complex: leaving out the particularly evident detachment of the characters from the rest of the environment (which, in fact, is more a virtue than a defect, given thehuge amount of detail and the vastness of certain locations), the animations of the same are almost woody, in some points, and do not blend well with the quality of the surrounding world. In particular, this is noticeable in the dialogues, which, moving to a close-up and partially animated screen, shows more details on the models of the individual characters, which often do not completely correspond to the interactive counterpart outside the spoken sequences. Similarly, lip synchrony also seems out of phase on several occasions, although in this case we can assume that it is a localization problem, with animation based on the original German speech.

The dubbing itself, however, it must be said that it turns out to be ambivalent: if on the one hand enhances the characterization of the characters (Nuri and her internal conflicts related to the raven's curse, Sadja and her quest for revenge against a former ally, Geron's constant drive to continue in his mission), on the other hand, is at times mediocre under the pure interpretative level. Basically, English dubbing isn't bad at all, quite the opposite: however, some dialogues seem rather flat, some sections from which a greater emotional response can be expected in the words and tones of the conversations, slip away in voices at times apathetic. If the main instinct was to blame an ineffective localization, this feeling is dwarfed by the precedents in the field of Dedalic: with the Deponia trilogy (whose brilliant script is vargated by the same author of Chains of Satinav and Mentz), the English-speaking localization was even better than the original, adding deliberately ironic tones to the characterization of the characters, and giving depth to them.

A certain bitterness in the mouth, therefore, even if this is soon tempered by the rest of the audio sector: with one soundtrack with perhaps unoriginal tones, but definitely in line with the settings at times dreamlike, at times epic and colossal or claustrophobic and introspective, Memoria manages to perfectly underline the atmospheres of the various narrative arcs, without ever distracting the player from the main focus, the story told and the environments in which the events unfold.

Verdict 8.5 / 10 An apt title for an unforgettable work of art in point & click format Comment The experience of Dedalic Entertainment in the point-and-click genre is felt predominantly in Memory, with satisfying and never banal puzzles, an excellently crafted story and game mechanics and narrative that will satisfy any user of the genre, from longtime graphic adventure gamer like myself, to newbies approaching an inventory for the first time. Although it is a sequel, and there are references in several places to the direct predecessor, Memoria never cuts out that slice of users that enters the world of Geron with this chapter. A world that unfolds equally on two timelines perfectly intertwined and built to influence each other, but without ever breaking that feeling of credibility of the characters and their motivations. Summing up the ten and more hours of gameplay dedicated to Memory, whose excellent longevity is still left by the threads not yet intertwined for a possible further review, a product emerges that is not free from defects, but that Dedalic has been perfectly able to hide and minimize, diverting the player's concentration to those focal points that make the gaming experience as enjoyable as reading a good book, and leave a prolonged feeling of satisfaction with the results obtained. Pros and cons ✓ High quality hand drawn settings
✓ Captivating story and narrative techniques
✓ Complex but satisfying puzzles
✓ 8-10+ hours of longevity x Poor localization of dubbing
x Some situations with an ambiguous solution
Do you want to be a video game expert and know all the tricks, guides and reviews for your video games ? Holygamerz.com is a group of video game fanatics who want to inform you about the best tricks, guides and tips. We offer you the best information to be a reference in gaming, so here you can find guides, tricks, secrets and tips so you can enjoy your games to the fullest. Are you ready to get all the achievements of that game that you resist so much? Enter now and enjoy your favorite video game to the fullest!
Redout review ❯

Add a comment from The Dark Eye Review: Memory