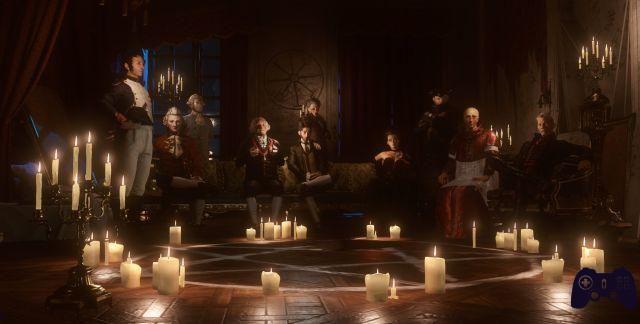 The serialization in recent years has taken more and more foot in the videogame market, especially with regard to Story Driven, just look at Life is Strange or the numerous titles of the late Telltale Games.

In the midst of this type of market, the French Big Bad Wolf is resurrected in the enterprise of breaking out of the chorus, making herself noticed with an interesting title and new mechanics for games of this genre.
With The Council (which we have already talked about in the first and second episodes) we were able to witness a breath of fresh air, a Story Driven / RPG hybrid that, we hope, will make school for future narrative games.

So, there are a French, a German and an Italian ...

The story, set in 1793, sees the young man Louis de Richet, a member of the secret society known as the Golden Order, travel to a distant island in search of his mother Sarah, head of the mysteriously disappeared Order.
The island belongs to the lord William Mortimer, who usually organize sumptuous meetings calling the crème de la crème of the world high bourgeoisie, where it is possible to "forge strong bonds of friendship".
In the charming mansion of Lord Mortimer Louis will meet a prominent cast, from an elder George Washington in his second presidential term to a young and ambitious Napoleon Bonaparte, passing through the busty English Duchess Emily Hillsborough and the enigmatic German councilor Johann von Wöllner.
Each of these characters, in addition to the courtesy of the facade and the refined manners, immediately make us realize that they have something to hide and it will be up to our Louis, "trapped" with them on the island as in the story of Agatha Christie, to decide whether to investigate the mysterious guests of the villa or continue the search for the mother. Each path chosen, in fact, excludes another, but all will give the young protagonist important information to exploit in his investigation.
The plot, divided into 5 episodes divided into 3 chapters each, is decidedly captivating, immediately inserting the player into intricate political games and occult mysteries and, despite taking place entirely in the wonderful villa of Lord Mortimer, he knows how to paste it to the screen.

Family, trust, religion, all values ​​that will be questioned in this intricate and labyrinthine succession of events.

Each character on the island has a very specific character, with immunity and vulnerability to be able to manage during the numerous dialogues.

The choices, as already mentioned before, make their weight felt, opening up to drastically different scenarios and bringing the story to at least 3 different main endings, each of which then with numerous conclusions, based on the choices made during the game.

In short, The Council has great replayability.

But beware that slips are always around the corner! In fact, towards the end of episode 3 we will become aware of some supernatural elements (whose nature I will not say to avoid spoilers) that could make the player turn up their noses, until that moment immersed in a disturbing but still realistic environment. These elements will change the perception that one has of the story and, later on, even the gameplay, without however distorting the context entirely.

The peculiarity of The Council lies precisely in the gameplay, whose dynamics strongly distinguish it from other Story Driven games seen so far. But let's go in order:
Our Louis will begin his adventure by deciding his profession, which pretends to be a "class" throughout the game and will define our relationship with the various NPCs. The choice falls on "diplomat", "detective" and "occultist", each of them having different abilities all upgradeable as you advance in level. The choice of class makes the inherent skills easier to upgrade.
As Diplomatic we will have advantages on Persuasion and in creating Diversives, as well as a modest knowledge of Linguistics, Politics and Etiquette.
Il Detective, of course, he will have skills that make our perception of the environment around us better, using Psychology, Logic and Interrogations as battle supports, and knowing how to use physical Agility and Observation wisely.
The Occultist is perhaps the most subtle class, making the art of Manipulation and Subterfuge real weapons, and exploiting their knowledge in the field of Science, Occultism and Erudition.
Each of these skills will be used throughout the story, both in the dialogues and in the interaction with the environment, spending the Commitment Points available to us. The point cost will depend on the level of the individual skill and Louis' bonuses / penalties.
There are other ways, in addition to the level up, to enhance our dear skills, such as Talents and Traits: the former are obtained if certain requirements are met, while the latter, which will outline Louis's personality, if certain choices are made. .

Talking too much, in the long run, is tired

In the dialogues one cannot help but notice a very well studied direction.

As already mentioned a few lines above, each npc we meet has a well-defined psychological characterization, with vulnerability and immunity to discover. It is up to us to decide how, using consumables, investigating or using skills, in the hope that they will work.
Consumables, in fact, greatly enrich the style of play. There are 4 of them and we can bring up to 5 of each type. They can restore the commitment points spent, remove malus, know the vulnerabilities and immunities of the interlocutor rather than reset the cost of skills.
All of them, as well as the diary, can be used during the dialogue, so that you can study at any time the best strategy to get what you want.
Some particular dialogues, the Confronti, are real verbal duels that Louis will have to face, with even drastic consequences if they are not overcome. Sometimes the dead can fall.

You don't live on words alone, every now and then you have to make your brain work and risk some limbs!
The Council's puzzles are many and sometimes difficult to understand, thanks to the fact that they are often based on word games of the English language, so for the less English speakers it can be difficult to find the solution. In this case the subtitles help a lot, thanks to the good adaptation that has been performed.
Although the difficulty may vary, we will never be faced with anything impossible, you just need to know how to find and properly use all the necessary information.
It can happen, however, to be penalized even abundantly if you risk a wrong answer, be warned!


The eye wants its part

The technical sector shows the weaknesses of this product, but not everything is to be thrown away!

From a technical point of view The Council looks like a well-made product, despite some flaws.
The work done for the various models is commendable, especially for the various textures applied, which make Lord Mortimer's villa full of details and pomp.
Also excellent work regarding the design of the characters, each of them characteristic in its own way. Too bad only for the woody and sometimes funny animations of their movements, especially towards the end of the fifth and final episode.

For the facial expressions, on the other hand, a more meticulous work was done, making the viewer immediately guess what that character is feeling.

All this is accompanied by a discreet but not excellent sound sector. The soundtrack, in fact, accompanies the events of our Louis well, without however standing out, making it forgettable once the game is over.

The dubbing, entirely in English, is of good quality as long as it is sometimes not perfectly synchronized with the lip of the models.

The level design is a true work of art, not only for the structure of the villa which is easy to learn so as not to get lost, but above all for the various artistic works present in it.
Each painting or statue, in fact, was exhibited according to a very precise logic. In the dining room, for example, we find works concerning the sorceress Circe while in the garden, where there is a labyrinth of hedges, statues on the myth of Theseus and the Minotaur are scattered.
Even every single guest room has been decorated ad hoc: In the room of the English Duchess Hillsborough, portraits of British monarchs are hung, while in the room of the alchemy-loving Prussian councilor Wöllner, we find paintings that recall this profession.
An artistic research not to be underestimated, the one carried out by Bad Wolf, who even manages to make Louis an improvised but good history teacher, whenever he decides to make him comment on the work of art in front of him.

Verdict 8/10 Great job, but you can always improve! Comment The guys from Big Bad Wolf have certainly managed to package a product of excellent quality, with a well-written narrative and well-chosen and not at all trivial gameplay choices. The direction and level design work is excellent, but it fails to mask small flaws such as rigid animations and a perhaps too anonymous soundtrack. However The Council turns out to be an absolutely recommended title, both for lovers of the genre and for those who love intricate stories where nothing is what it seems. Pros and cons ✓ Engaging plot and well-characterized characters
✓ Excellent management of dialogues and choices to be faced
✓ Captivating gameplay
✓ Superb Direction and Level Design x Overly woody animations
x Subdued soundtrack
x THAT twist
Do you want to be a video game expert and know all the tricks, guides and reviews for your video games ? Holygamerz.com is a group of video game fanatics who want to inform you about the best tricks, guides and tips. We offer you the best information to be a reference in gaming, so here you can find guides, tricks, secrets and tips so you can enjoy your games to the fullest. Are you ready to get all the achievements of that game that you resist so much? Enter now and enjoy your favorite video game to the fullest!
News + Mass Effect Legendary Edition: what does moving a camera involve? ❯