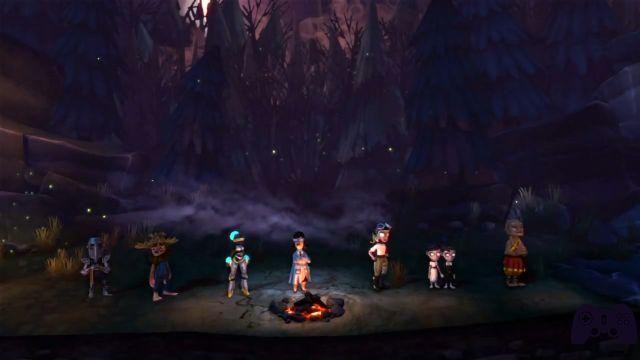 What happens if we combine Monkey Island creator Ron Gilbert with Tim Schafer's Double Fine Productions? We get a new game full of irony and laughter.
In this particular case, the fruit of the union is called The Cave, a graphic adventure with 2D platform mechanics, with the style that has always characterized Double Fine games: it does not focus on the external aspect but on what is there inside the game.
Last January The Cave landed on PS3, 360, Wii U and PC, distributed by SEGA, via digital download from their respective stores.

Seven characters and a Talking Cave

The real protagonist of The Cave is a talking cave, which will be the backdrop to the misadventures of seven unfortunate travelers, each with their own story and their own dark side to reveal.
The cave in question has existed for millennia and has always shown those who ventured into it their past, their present and their future. It was up to the visitors to figure out what to do with these teachings, and it's up to the player to decide what the fate of the seven unfortunate protagonists will be.
Each character has their own story to tell through a level of the game, but to discover them all we will have to complete the new Double Fine game at least three times; with each new game we will be able to choose only three of the seven unfortunates.
The combinations with which we will choose them will not change the plot of the game, but only the levels that we will face, because if the protagonist of the area is absent from the trio, we will completely skip the level, continuing in the story; vice versa, if we have a certain character with us, we will find out why he is in the cave and what his most hidden desire is.
For this reason The Cave is easily completed in four hours (on the first lap) which will be drastically reduced once the puzzles are discovered (including the four basic levels that never change during the various runs); luckily, it takes five games to discover all the endings and secrets of the cave.
In fact, each protagonist has two endings, which obviously we will not reveal to you but which will be clearly opposed to each other: will they yield to their desires or will they sacrifice them for something more precious?
As already written, it is up to the player to write the ending of these seven little stories, and perhaps learn something from the teachings of the sarcastic Talking Cave.

We have already anticipated that The Cave's gameplay has platform mechanics combined with the resolution of puzzles typical of the most famous graphic adventures, and there are several citations both to the previous Double Fine games, and to Gilbert's most famous work, complete with distributors of Grog scattered around the cave.
The seven characters each have a different ability, which benefits them in certain puzzles but puts them in difficulty in others: for example, the Scientist can open the grates without having to pull the classic lever, simply hacking the nearby computer, but she will not be able to swim to long and hold your breath underwater like the Lout.
Or, the explorer will be able to whip herself through pits and spikes, but unlike the Time Traveler, she will not be able to teleport through grates.
In short, we will have to think carefully about which of the three characters to join in a single group, in order to have the most heterogeneous abilities possible and safely overcome the dangers of the Cave.
Each area, or rather, level of depth, offers different puzzles with which we will discover from time to time either the story of the key character, or the misadventures of other ill-minded people trapped in the magical cave.
Also, when we find ourselves in a level of a certain character, we will have to use his special ability to be able to complete the puzzles in the area. For example, the Knight's castle will require the latter's protective barrier several times, while the Monk's sanctuary will see us facing trials that can only be overcome with the help of telekinesis.
There is no Game Over in The Cave, if we happen to die, we will be sent back a few meters back from the place of our death, and if we die several times in the same place, the Cave will not miss the opportunity to make fun of us.
Moving on to the Puzzle part of The Cave, each puzzle is solved using the objects scattered around the level, as in any self-respecting graphic adventure. So here we will find ourselves transporting a tire back in time, to ensure that a laser does not kill us, or we will find ourselves carrying up and down a London villa do not ask how much it cost to build it inside the Cavern nd Guido) a vase to fortunately, full of water at night, to be able to extinguish a fireplace and reach a key that opens a door at the beginning of the level.
A well-studied back-tracking that teases the player's intellect, spurring him to continue the adventure and attempts, even if unfortunately there are few puzzles that can be solved with more than one method and this, as already mentioned a few lines above, undermines the longevity and replayability of the title.

The narrator of the Cavern and practically the only common thread of the whole game, through his sarcastic jokes, and the masterful dubbing of Stephen Stanton (for the unfamiliar of the field, one of the best American voice actors ever) manage to keep glued the player and get more than a laugh. Although the audio of the game is all in English (as in every Double Fine game for that matter) everything is subtitled in the language dear to Dante, although many puns get lost with the translation; instead none of the seven protagonists will utter a word, except for the groans in case of death, another little gem that demonstrates how metaphysical the journey into the Cavern is.
The background pieces are unfortunately anonymous, and will hardly distract the ear from the many recciatine thrown by the Cavern itself, or by the characters we will meet there.
Visually The Cave has polygonal graphics, which almost look like plasticine, and although it is not very detailed, it manages to make the settings and the feeling of the place in which you are located worthily. The lighting effects are rendered very well, differentiating places like the desert island and the Scientist's hangar only by a different color scale.
Unfortunately, everything very often suffers frame rate drops, and several slowdowns between one area and another or when elements of the trio fall behind and have to catch up with us. Nothing horrible, but something Double Fine could easily avoid.


Exploring in company, or not?

If you want you can face the whole adventure of The Cave with up to two other friends, but the multiplayer of the latest Double Fine game does not offer a normal split screen, nor an enlarged shot, it simply makes one player move at a time, as if we were playing alone.
An inconceivable choice, which makes multiplayer superfluous and makes one much prefer a solo adventure, as per tradition.

When compared to the other Double Fine titles, especially Costume Quest and Stacking, The Cave manages to equal them in irony and content, but remains inferior under the technical and visual side.
However, it remains an excellent game of the software house and an excellent return to the field for Ron Gilbert.

Verdict 8.5 / 10 Say Friends and Enter Comment Although not without flaws, this latest Double Fine game manages to conquer like its predecessors, you will fall in love with the sarcasm of the Cavern, and who knows maybe you will learn something about what is really important as the seven unfortunate protagonists . Pros and cons ✓ Intriguing puzzles
✓ Many laughs x Many frame drops
x Mindless multiplayer
Do you want to be a video game expert and know all the tricks, guides and reviews for your video games ? Holygamerz.com is a group of video game fanatics who want to inform you about the best tricks, guides and tips. We offer you the best information to be a reference in gaming, so here you can find guides, tricks, secrets and tips so you can enjoy your games to the fullest. Are you ready to get all the achievements of that game that you resist so much? Enter now and enjoy your favorite video game to the fullest!
NBA 2K17 review ❯