The best Echo devices for your home 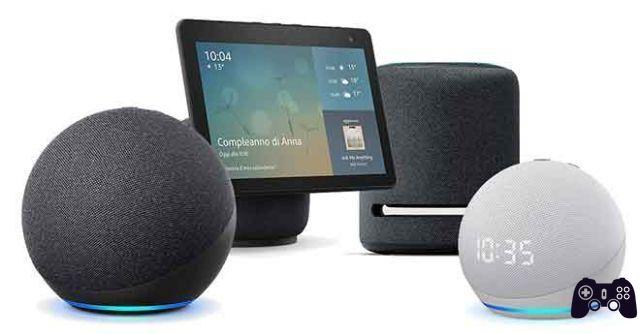 The devices Amazon Echo have represented a real revolution in recent years. We are talking about the voice assistant signed by Amazon, with which the user communicates directly to manage some daily actions such as switching on appliances, controlling the smart accessories inside your home, listen to music, and so on.


All through your own voice: the Echo operate on the basis of voice command. What are the devices of the Echo line and what are the specific functions? We asked these questions to those who deal with technology applied to home automation every “holy” day, the friends of tecnologiacasa.com.

If you do not understand about it, but still intend to have a trendy device at home, continue reading and analyze in detail which of the Echo devices we offer is really for you.

The features and functionality of Amazon Echo

The distinctive feature of the Echos is the integration of an Amazon-developed voice assistant, called Alexa. It is a device with which you interact by speaking and which responds based on the requests made by the user: in most cases, just ask a question and the device responds in kind.


This is a clear and simple demonstration of the technological progress we are witnessing, capable of putting the human being in relationship with (a hint of) artificial intelligence. What devices can do Amazon Echo?

Echo gives you information on the climate and temperature of your city and of every place in the world, helps you to draw up shopping lists, advises you on what to prepare in the kitchen, informs you about current news, helps you choose the fastest way . And then it is able to control other smart devices (such as lights, televisions, hi-fi), it puts you the music you prefer and reads the information from the web for you.

Just call Echo and say your request to see the device take action and meet your needs. In practice you will speak face to face with the device, which within the limits of its capabilities (however very high) will do everything possible to answer the question.

The Echo Dot is among the best-selling voice assistance devices in the Amazon Echo line. First of all, it is liked for its small and compact design: since it takes up little space it is easy to place it practically anywhere in the house.

It is no exception to others of its family, since it allows you to send messages, listen to music (by connecting to the most popular Music platforms, such as Spotify, iTunes, etc.) and manage your smart home through the Alexa application. .

It could not be missing from the list Echo Input which in terms of functionality, has nothing to envy to the other models belonging to the Echo line. Although many users think that it is less performing only because it requires the installation of an external speaker (to which it can be connected via Bluetooth or 3,5 mm audio cable, since the connection via WiFi is not supported), for those who do not want to spend a lot can be considered a noteworthy alternative.

Also because it is a model that, thanks to the flattened shape of only 14 millimeters, can also be placed in very low spaces.

If your ambition is a smart home managed in the best way, you can not but consider the Echo Plus. Not only does it boast excellent sound quality, but also in economic terms it is affordable.

Echo Plus comes with 7 microphones designed to reduce noise, and to pick up the user's voice even if you are at a great distance. The device then has two speakers with Dolby system. But the real gem is l'Hub for the smart home: via a Wi-Fi connection you can connect the device via application to the control system of sockets and Smart bulbs.

Another device that has garnered the favor of users, Echo Show can be purchased at the recommended price of 229,99 euros. It comes with a 10,1 "display and a 1280 × 800 resolution and with an aesthetic with attention to the smallest details, ideal to be placed on top modern desks and design. The highlight of this model is the very powerful loudspeaker with processor Dolby.


Its functions are no less than other Echo devices, indeed it has the additional option of starting movies and showing recipes on video thanks to the presence of a very high definition and quality screen.

About its use in the kitchen, the screen is also the optimal size for creating a shopping list.

Echo Show 5, one name a guarantee! We stay on the range Show but let's move on to one of the newer models in the line that has changed the performance of the voice assistant even further.

It is a device that also allows you to make video calls, turn off the camera, or cover it with the special integrated cover. It has a 5,5 "screen as well as a 960x480 resolution. The speaker boasts the following specifications: 1,65 "and 4 W. The compact size makes the device great for placing anywhere in the house.

add a comment of The best Echo devices for your home