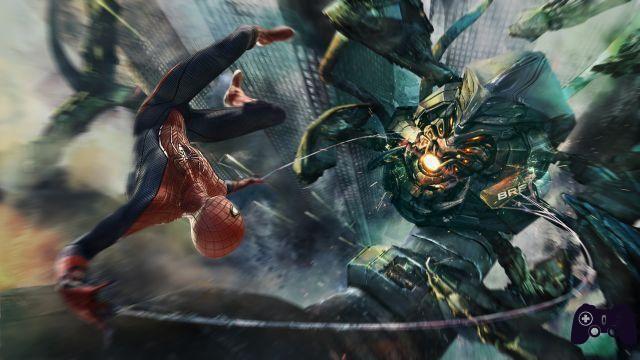 2012 is the year of the great relaunch in the cinema of Spider-Man, with the film The Amazing Spider-Man, with Andrew Garfield and Emma Stone; a week before the worldwide release of the feature film, Beenox and Activision offer us their namesake and inevitable game on the wall climber.

The game is set immediately after the conclusion of the film, read this paragraph at your own risk if you haven't seen it yet, and it confronts us with a viral epidemic that threatens the island of Manhattan.
We discover that Connors' lizard experiments are only a small fraction of Oscorp's animal and human crossbreeds, and we meet new chief scientist Alistair Smythe, intent on creating Nanobots to protect the city.
During a visit to Peter's Oscorp, the worst happens, the experimental hybrids manage to escape and begin the contagion of the city, leading our protagonist to a hard choice: to free Dr. Curt Connors (Lizard) from the asylum in order to help him develop an antidote. .
Plot therefore that resumes the film where we left it, and recalls many events, both important and less, and a game that is therefore set in the same alternative universe of Spider-Man (said by the Movieverse cartoon lovers, certain plot choices will make the nose to hardcore comic fans ed).
Throughout the duration of the game the characters will be able to have greater introspection and characterization than in the film by Marc Webb, in addition to the presence of numerous cameos of some of the famous enemies of Spider-Man (but we will talk about it a little further down ed) .

After four games that winked more at the comic universe than the cinephile one, with more linear Gameplay and maps, closed without the possibility of exploration and the division into levels, Benoox decides to return to Free-Roaming, allowing Spider -man
to fly around the island of Manhattan again, like in the good old days of Spider-man 2.
Credit to merit, Benoox has managed to give us the most fluid Spider-Man ever, every pose, jump and launch from the skyscrapers is comparable to the movements of the superhero in the comic, and will move fans.
The Spider Shot mode is finally a dream come true: by pressing the back button (R1 in the Ps3 version ed) we will be able to slow down the time briefly and decide where to move, orienting ourselves thanks to the golden replicas of Spider-man, with the snappy speed of Peter Parker, guaranteeing us a real spectacle for the eyes and a joy for the hearts of lovers of the character.

After having praised the Gameplay of the free-roaming part, the criticism of the combat and stealth part of the game is due.
The Amazing Spider-Man tries to cheerfully ape Rocksteady's Batman, with a two-button combat system, with the addition of a third for cobwebs, but although the combos are varied and spectacular, the player will not be able to choose in which way the opponent will go to the mat, because the frequency of hits will always be the same, but the execution will depend on our hero.
Furthermore, during the Stealth phases, you notice the poor AI of the enemies, who do not see the spider even when you stand in front of it, as long as the player remains immobile (a defect that is present in all three difficulties, although they are slightly difficult more sensitive ed).
But not all evil comes to harm, in fact the gameplay of Batman fits perfectly to Spider-Man, although Beenox has not managed to make it as innovative and attractive as the DC counterpart, the fluidity of the Marvel hero during the fight will certainly be appreciated respect. to that of the previous chapters.
A clear improvement therefore that we hope will not be lost in the next videogame chapters of the friendly neighborhood Spider-Man.

Spider-Man, we need you!

Like any good Free-Roaming, The Amazing Spiderman guarantees a huge amount of subquests and subplots to follow, scattered throughout the island of Manhattan.
We will then find ourselves rescuing infected civilians, collecting 700 comics (such as the number reached in the states by the Spider-Man header) scattered throughout the city, and taking photos for the Daily Bugle at singular events, photos that most of the sometimes they will involve cameos of the spider's most famous enemies (including the Sandman and the less famous but lethal Mr. Negative); there will be no shortage of minor crimes to be foiled and chases of runaway thieves, material therefore for all tastes that will guarantee twenty hours of entertainment beyond the end of the main plot.
Unfortunately, these subquests become quite repetitive for non-lovers of the genre and the Marvel hero, so you may leave the game much sooner than necessary.

You were more beautiful in photos!

Unfortunately graphically The Amazing Spiderman does not excel in quality, leaving disappointed those who followed the game during its development and hoped for a graphic quality equal to the videos shown, instead the only very detailed aspects are obviously our hero, and the cruel robots killers of Alistair Smythe (yet another joy for the hearts of marvel readers ed) while the buildings of Manhattan almost all resemble each other (except the main points of interest such as Times Square, and the buildings useful for the plot) and its inhabitants (all the PNGs in short) that repeat about 5 different textures that repeat themselves endlessly.
The dubbing in other languages ​​is flanked by much more captivating music than the Hollywood counterpart released in theaters, but unfortunately nothing memorable even in this respect.


Amazing Yes… but not entirely

Even if in part we are faced with one of the most beautiful games on Spider-Man, there are still several flaws to be refined, and above all there is a sense of incompleteness in the various subquests.
If you love the Marvel hero though (both comics and movies), The Amazing Spider-Man is a title you can't miss and you'll find yourself fluttering around Manhattan for much of the disc's holiday in your console.

Verdict 7/10 Better than Webb's movie of the same name Comment This game gave me everything I expected and that instead it didn't give me, the film, blows, a decent plot (although not faithful to the comics) lots of action and so much spectacular. The AI ​​of the enemies and the combat-stealth gameplay that mimics that of Rocksteady's Batman is a bit sinful, but all in all a good game that cannot be missing in the libraries of comic book enthusiasts and superhero films. Pros and cons ✓ The smoothest Spider-Man ever
✓ Lots of cameos and costumes to unlock
✓ The Fights against the Ammazaragni are spectacular x Very poor enemy AI
x Subquest in the long run repetitive (Except photographic ones)
x A bit boring boss fights

Do you want to be a video game expert and know all the tricks, guides and reviews for your video games ? Holygamerz.com is a group of video game fanatics who want to inform you about the best tricks, guides and tips. We offer you the best information to be a reference in gaming, so here you can find guides, tricks, secrets and tips so you can enjoy your games to the fullest. Are you ready to get all the achievements of that game that you resist so much? Enter now and enjoy your favorite video game to the fullest!
Ninja Gaiden 3 review: Razor's Edge ❯

The Legend of Heroes: Trails of Cold Steel review