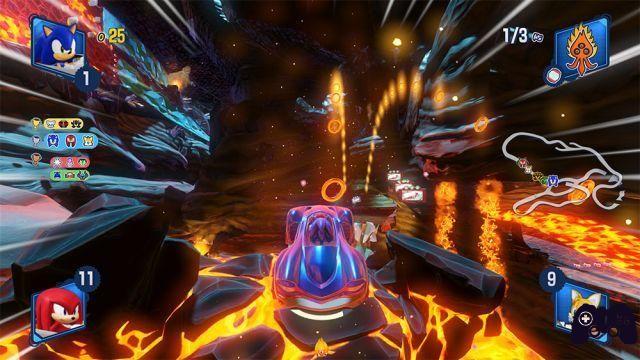 Sonic gets back to running, but like he never did before.

There is del romantico, in the idea that once again it must be SEGA who plays the role of the only other pretender to the throne. Historical courses and appeals in an industry that - then as now - has no other alternative than opposing red with electric blue, order with chaos. In short, oppose Mario (Kart) with Team Sonic Racing.

Because in recent years no one has really tried to undermine Mario Kart. A few weak indie attempts and nothing more, with a scene that preferred to escape the single battle - much easier to try to be the new WipeOut, at least until Sony decided to resurrect WipeOut - leaving Nintendo's karts to compete only with their own. ghosts, in a free ride on a clear track.

Sonic against Mario, then. After the remakes of the 90s video games, the reboot of the rivalry that characterized the 90s is staged. 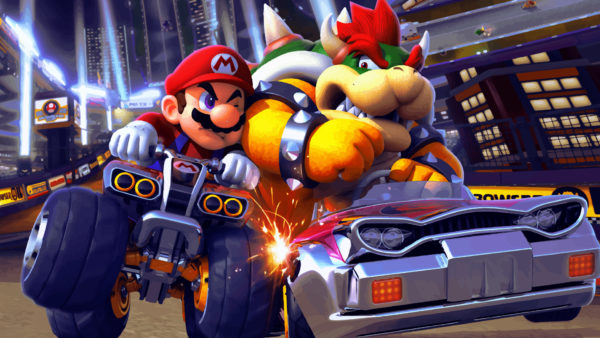 Incorrect video game:
Reductio ad Nintendum is killing our neurons to tell Team Sonic Racing? There are two possible approaches. The first is to resort to what our upside down has defined as Reductio ad Nintendum, playing the comparison game with its equivalent on Kart signed by the Grande N and highlighting the similarities between the two products. It would be an easy exercise for both writer and reader to reduce the experience to points of contact with a title that if you haven't played however you know why it is pop and start the discussion from a common basis. It matters little that by doing so they are lost all the things that make Team Sonic Racing a product with its own dignity, a very specific soul that manages to adapt to the four wheels those that are the characterizing traits of a Sonic video game. Why Sumo Digital did just that: no one clone / reskin by Mario Kart, but a videogame of SEGA's hedgehog with all the trappings. For better or for worse.

Team Sonic Racing is a Sonic the Hedgehog 2 on wheels, and as such we want to tell you about it.

The other way? It is to go and see what's up differentrather than focusing on things that look alike. And what is different, compared to the experience on nintendara tires, is that there is a lot more Sonic here that as there has been in some 3D chapters of the main series. Try to ask yourself what made the blue hedgehog famous, and you will probably answer like this: speed, even at the expense of elegance and balance from the point of view of level design. Sonic isn't afraid of being rough, or rather he doesn't have it when he's really himself (and so he brings out his best, as we saw in Mania). Here, Team Sonic Racing makes this assumption its own, with the result that there is a lot of racing on the track - because the bulk of the innovations that gravitate around the team concept aim at that, go faster - even at the cost of messing up the circuits and turning out a little more "dirty"Due if you go to analyze the collisions with the rest of the scenario. But that's okay, it's basically a tax on the identity of a product that tries to adapt the main series highlights to karts, instead of chasing what is now the reference point of the genre (even if only for lack of alternatives). Identity that also passes through team mechanics.


The first word in the title is 'Team', an unambiguous message

Maybe “Sonic Team Racing” would have been a more captivating title, because it sounds better than “Team Sonic Racing” and puts the company's image in front of the whole man. But there is a reason why they opted for another solution instead, and that is that the concept of a team really is the focal point of the whole experience: you run in pairs of three, and the teammate ahead leaves a trail for the other two that if followed gives points and increases speed, also allowing you to use a slight turbo when you leave it. Not only that, but it is also possible offer and request items from companions, in case of necessity. Another mechanic that gives points to fill the bar behind the vehicle, which once full allows you to activate the terrible Super Turbo, truly capable of subverting the fate of a race and the finish grid. All mechanical that they work great, and which marry with a track design of a certain level - but which must be admitted to be a little bit behind, compared to Mario Kart 8's Anti-G and above all with a convincing driving model, a feeling that has nothing to envy to any other arcade production.

At the bottom, it is also worth mentioning the presence of a real modality campaign, useful for presenting circuits and game modes (you don't live on team races alone, but there are also a series of challenges that enhance sporty driving a la Sumo Digital) and built by linking the various events to each other by dialogue sections, which characterize the characters on the roster. All this, localized in both written and spoken Spanish, given the presence of a cast of Italian voice actors - could Claudio Moneta never be missing?

Verdict 8.5 / 10 Come on, you say this is a clone too ... Comment Team Sonic Racing needed. It is a breath of fresh air in a genre that is now spoiled by breathing only one title, and which above all is the victim of a spoiled user who reduces everything to that single title. Do not call it a clone, because it is not: it has its own design and carries it on to the end, running flapping like the Sonic of the classic timeline would. Pros and cons ✓ It has its own identity
✓ The Team idea works great
✓ firmest x A little rough
x Good but not great track design

Do you want to be a video game expert and know all the tricks, guides and reviews for your video games ? Holygamerz.com is a group of video game fanatics who want to inform you about the best tricks, guides and tips. We offer you the best information to be a reference in gaming, so here you can find guides, tricks, secrets and tips so you can enjoy your games to the fullest. Are you ready to get all the achievements of that game that you resist so much? Enter now and enjoy your favorite video game to the fullest!
Monster Hunter 4 Ultimate review ❯

Monster Truck Championship, being big and bad is not enough | Review