Tales from the Borderlands: Episode 5 - The Vault of the Traveler review 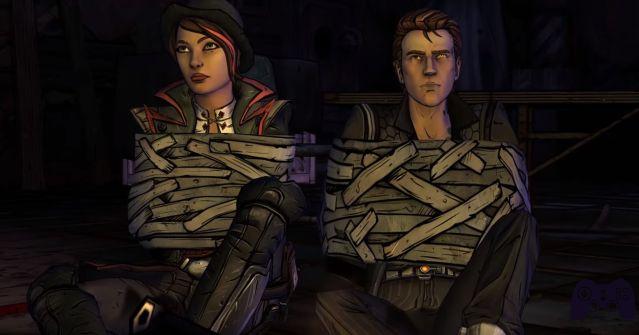 A little less than a year after the release of the first episode (Zer0 Sum) Tales from the Borderlands finally reaches its Season Finale, with a fifth chapter on which two big responsibilities lie: the first, trivially, is to bring down the curtain convincingly on a series that until now has managed to amalgamate the spirit of the Gearbox series well with the creative vein of Telltale, while the second is to not miss the goal of making sense (and above all the consequences) to the choices made by players over the course of the other four episodes. Without further ado, let's find out how the Californian studio fared

As we have already repeated on the other four occasions while writing this article, we have tried as much as possible to avoid substantial advances on the events of the episode, in order to allow a reading without the risk of spoilers even for those who have not yet played The Vault of the Traveler. Given the circumstances, however, especially since we are talking about the final chapter, some mention of the events of the previous episodes was necessary: ​​keep this in mind when you venture into reading.

Everyone thinks that they're the hero of their own story

Despite the initial perplexities, the fifth chapter closes the circle in the best possible way

It picks up where we left off last August, with our heroes (or presumed heroes) on Helios, a sort of Jack the Handsome reinterpretation of the Death Star. The episode is basically divided into two parts: in the first segment the narration follows the tones and plot of the previous chapter, Escape Plan Bravo, maintaining the two "voices" of the narrative (on the one hand Rhys struggling with the AI ​​of Jack the Handsome , on the other Fiona determined to recover the lighthouse of Gortys and return to Pandora) practically distinct, reaching the maximum to make the two cross but never in person. The second half is instead more unanimous in every sense, and sees not only the two protagonists collaborating more closely but also the return of some characters taken from previous chapters (or even simply from the “original” series of Borderlands). All this, despite the doubts expressed the last time, manages at the end of the fair to close what was pending during the other four experiences., with a more than convincing pace e able to alternate, as and better than what Escape Plan Bravo did, more serious and "emotional" moments with sections in which dialogues rich in the typical humor of the Gearbox series dominate, up to an ending that (almost surprisingly) is in perfect Borderlands style.

The first of the two challenges to which this Season Finale was called can therefore be said to be overcome: T.he Vault of the Traveler on the narrative front is absolutely on par with its prequels, confirming a positive trend for the series which, when it comes to telling (or in any case using the characters available) has practically never stumbled.

The choices, in the end, have real weight

At this point, as anticipated, one cannot but draw conclusions regarding the question of choices: well aware that it is still an artifice and that in many ways the skeleton on which the story rests is predetermined, Telltale cannot fail to be credited with having managed to square the circle this time: what has been done in the previous episodes in fact influences the second part of the experience almost in its entirety. Mind you, the events (at least, most of them) will in any case take a certain turn and lead to a certain situation, but what will change will then be how this evolves and the who will accompany the two protagonists in this last act, with a ( already mentioned) very successful surprise for longtime fans who have been able to play their cards well. Also on this front, therefore, we can be said to be satisfied, and Tales from the Borderlands therefore manages not to make the player think that he has been made fun of on the importance of the choices he had to make from time to time.


When you don't know how to get out of trouble ...

Also on the play front this time we are there

If, as mentioned above, from the point of view of the quality of the story Tales From the Borderlands in the end it has always settled on excellent levels, the same thing cannot be said of the playful component of the package: this has from chapter to chapter assumed alternating importance, sometimes making the player participate in the maneuver and other times instead making him suffer the story in a more passive way, chosen during the dialogues separately. In this case, especially close to the finale, it is certainly part of the first scenario, thanks to the presence of one of the most successful "interactive scenes" of the series (together with that of the "shooting" of the last chapter). So even if, with one exception, the unique abilities of the two protagonists never come into play, Telltale manages to entertain its audience even without resorting to Rhys' Echo Eye and Jackapedia.

No, nothing has changed

From a technical point of view, as expected, nothing has changed: the product, also thanks to the adaptability of the visual style of Borderlands, does not show particular signs of failure and calmly accompanies the player to the end. Everything continues to be available only in English (with related subtitles, always in the Albion language) as is now expected when it comes to Telltale products.

Verdict 8.5 / 10 We did not mention the Power Rangers at random Comment The Vault of the Traveler, summing up, turns out to be an excellent season finale for a product about which almost a year ago more than someone had shown skepticism: Telltale this time is managed to bring home the loaf not so much thanks to the charm of the story itself, but (as Gearbox did for the main chapters) by focusing everything on dialogues, jokes and above all on the characters available. Pros and cons ✓ Excellent season finale
✓ One of the best "play sections" of the series x Skills of the protagonists little exploited

Do you want to be a video game expert and know all the tricks, guides and reviews for your video games ? Holygamerz.com is a group of video game fanatics who want to inform you about the best tricks, guides and tips. We offer you the best information to be a reference in gaming, so here you can find guides, tricks, secrets and tips so you can enjoy your games to the fullest. Are you ready to get all the achievements of that game that you resist so much? Enter now and enjoy your favorite video game to the fullest!
A Realm Reborn: Final Fantasy XIV PS4 review ❯

Add a comment from Tales from the Borderlands: Episode 5 - The Vault of the Traveler review