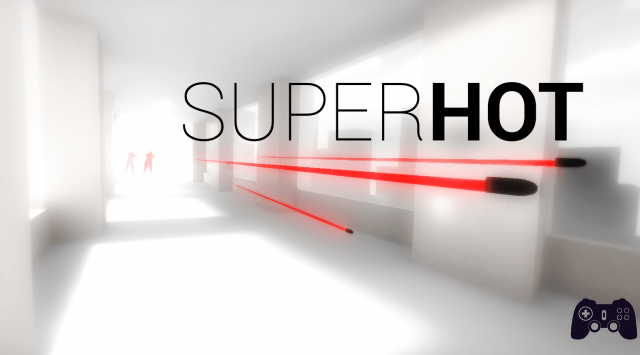 It is not uncommon for older gamers nowadays to accuse a certain lack of originality in current titles, leading to an excessive tendency to "recycle the same soup" in support of their argument. In such a scenario, however, it may happen that a team of developers (perhaps independent) find an idea to stimulate the imagination of the players and to bring a series of substantially new mechanics to the video game sector.

SUPERHOT Team is a group of independent developers who have been able to effectively transport their concept from a simple "Browser-Based" demonstration to significantly more complex platforms, such as Linux, Poppy, PC and, in the near future, Xbox One. Their title, Superhot (stylized as superhot), symbolically bears the same name as the team, and is a mix between an FPS and Puzzle-Game with game mechanics that are nothing short of "unusual".

Superhot is currently available on Steam for the price of € 22,99.

What would you do if one day, suddenly, a friend of yours told you that he had played the most innovative First-Person-Shooter ever, and that he would be willing to provide you with everything you need to let you try it too?

Superhot immediately presents itself as a particularly "out of the ordinary" title, thanks to a main menu in all respects similar to a DOS Prompt. The player will instantly receive a chat message from a friend proposing to send an executable file of a splendid game called “superhot.exe“. At that point, the adventure into the world of Superhot can begin. 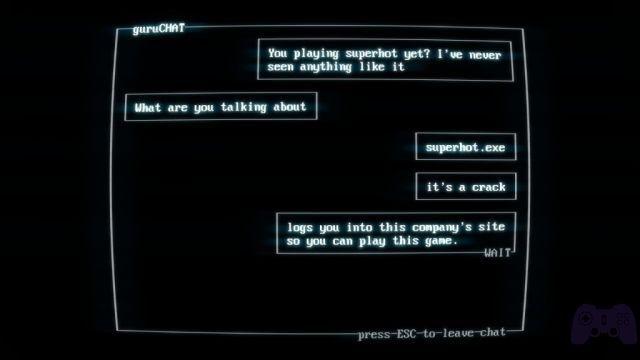 Superhot is more than it wants to appear

Somehow, one immediately gets the impression that the title of SUPERHOT Team is much more than what it wants to appear. Beyond the incredibly innovative game mechanics (which we will discuss in detail in the next paragraph), much of the entire scenario is rendered simply with a characteristic aseptic white, which composes shapes and settings substantially devoid of any texture. Polygons and voxels have never been as fascinating as in Superhot, in which, between one shade of gray and the other, the red of the enemies stands out like a flame, faceless human silhouettes that will shoot bullets in bullet time in our direction.

Due to the very essence of the game itself, there is no doubt how Superhot give the best without too many frame jumps and, possibly, with a fixed 60fps; although you use a not too demanding graphics engine, however, it suffers from a slight heaviness at higher resolutions in a mid-to-high-end machine, and it is therefore advisable to adjust the graphics options before launching into the game. Fortunately, however, lowering the resolution of several points will not prove too harmful for the purposes of the visual experience, thanks to the basic simplicity of the entire settings represented in Superhot.

"Time only moves when you move"

"Time moves only when you move". In this short, simple sentence, Superhot encompasses the very essence of the entire gameplay mechanic that pushes the player to the end, level after level, in an attempt to eliminate all enemies and survive every situation - if only to see the spectacular replays the game produces in the end of each level.

The concept behind Superhot It's simple: time proceeds at an extremely slow pace until the player takes a step or takes an action (such as picking up a weapon or using it), and then returns to its stasis-like condition again once that action is over. Watching the whole scene in first person, whoever "grabs" the keyboard will find themselves dodging bullets in bullet-time, disintegrating enemies with a couple of well-aimed shots, throwing objects and stealing weapons in a series of situations so choreographed that they would be envious to any action movie. 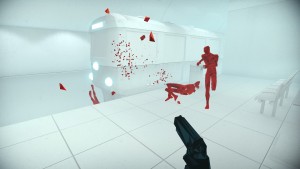 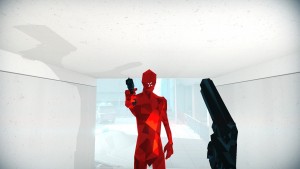 And the "password" (and also what gives the most satisfaction of all), in Superhot, it is precisely the overall “choreography”, formed by all those spectacular actions carried out during a level and which, in the end, will be assembled in the replay of the only attempt that led the player to victory. Watching yourself at normal speed while riddling enemies, throwing objects and dodging bullets is almost surreal and incredibly beautiful to look at, and is certainly one of the most successful elements in the game. The strong originality of the mechanics, However, soon gives way to a heavy monotony, broken only by the introduction of a new element exactly in the middle of the game experience that will try, in some way, to "change the cards on the table" without too much success.

In its "puzzle-game-like" nature,  Superhot boasts the presence of a recurring trial & error, which will see the player repeat the more complex levels over and over in an attempt to find a winning tactic that can lead him to victory. Often, however, this tactic will be based solely on the reflexes of the player himself and on a prior planning of the moves, which will take into account the shots left in the magazine or any alternative methods to eliminate all enemies and remain unharmed. A single pistol shot will be enough to eliminate both opponents and the player himself, and there will be cases where even thinking about your moves in advance won't seem enough.

And yet, Superhot it succeeds where many other titles would fail: to finish exactly when it should, to leave its mark at the right time. After the first half of the main campaign, in fact, the whole experience will be "contaminated" by some typical touches of the best dystopian novel, with continuous breaks in the fourth wall and an inevitable underlying fatalism that could lead more than one player to reflect on society we live in today. Although the story is nothing too original, the way in which it is presented is certainly innovative, thanks to continuous "anomalies in the system" and dialogues that seem to put the player in contact with the game itself. 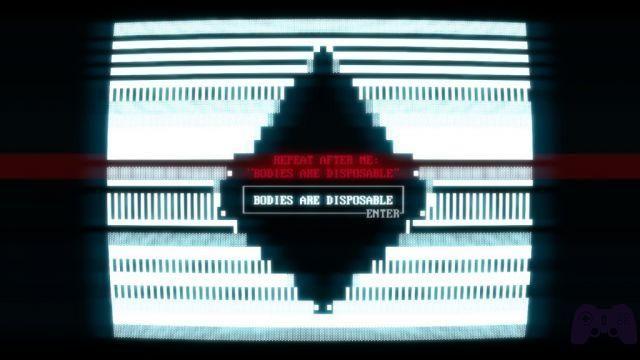 The scarce variety of weapons, the monotony and a strong concentration on the reflexes of the player (which, in a title based on time stasis, seems almost a dangerous nonsense) could be enough to remove more than one user from the product of SUPERHOT Team, which certainly does not appear without defects. Nonetheless, however, Superhot it remains a very well developed title, which deserves at least an opportunity by all lovers of "unconventional" game mechanics. Especially if you are passionate about George Orwell and his works.

Verdict 8.5 / 10 The [NAME_HERE] Parable Comment The idea of ​​SUPERHOT Team was certainly to make an "out of the box" title that could shake the player and feed the flame of reflection in his body. Unfortunately, Superhot only partially succeeds; removed a highly innovative game mechanics that allows a completely new approach to the genre, the title of the group of independent developers easily falls into the grip of monotony and frustration due to a trial & error formula which, unfortunately, is undermined by some stylistic imperfections . Despite some flaws, however, Superhot is definitely a title that must be tried and lived to the full, at least to hear what it has to say and to be fascinated by the way the story is presented. If you let it captivate you, the SUPERHOT Team title will amaze you from start to finish, ending very soon but certainly at the most suitable time to not seem too diluted. However, we recommend that you wait for a much more favorable price than the current one. Pros and cons ✓ Minimal, pure, effective technical aspect
✓ Spectacular, choreographic
✓ Innovative game mechanics
✓ Well framed and well presented story
✓ Finish at the right time ... x ... But it's really short
x It soon becomes monotonous
x Price too high for the experience itself
Do you want to be a video game expert and know all the tricks, guides and reviews for your video games ? Holygamerz.com is a group of video game fanatics who want to inform you about the best tricks, guides and tips. We offer you the best information to be a reference in gaming, so here you can find guides, tricks, secrets and tips so you can enjoy your games to the fullest. Are you ready to get all the achievements of that game that you resist so much? Enter now and enjoy your favorite video game to the fullest!
News Shaq Fu: A Legend Reborn will be released on June 5th ❯