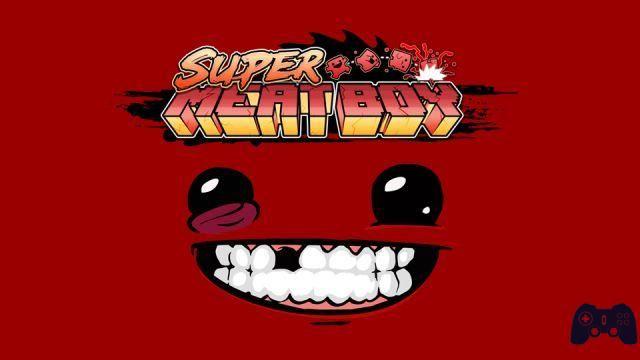 Super Meat Boy, a title created by Edmund McMillen and Tommy Refenes and made by Team Meat, is set up as a sequel to Meat Boy, a game created by McMillen himself, made in flash and published in 2008. Super Meat Boy sees the light on October 20 of 2010 via the Xbox 360 Xbox Live Arcade platform.

It's been 6 years since this bloody and flesh-toned kid started running on the most varied devices, even across the various generations of consoles: from Xbox 360 to Wii U, including on PC, Linux, Mac Os X, PlayStation 4 and PlayStation Vita.

During its debut Super Meat Boy was critically acclaimed, also garnering accolades such as Most Challenging Game from IGN and Best Downloadable Game from Game Spot and Game Trailers.

On the occasion of the arrival on Nintendo Wii U on May 12, 2016, almost six years after its first public appearance, let's see if this umpteenth porting was able to do justice to this small and agile hero.

The incipit of the plot with which Super Meat Boy begins is one of the historical clichés of the platform genre: Meat Boy, a bloody cube, is engaged to Bandage Girl, a cubotta made of patches, which is kidnapped by the evil Dr. Fetus, a fetus inside a robotic incubator. To save his beloved, our protagonist will have to face a series of levels studded with deadly traps.

It is certainly not a completely new expedient, however it turns out to be functional. While lacking a narrative with its own plot, the game manages to involve through the charisma of its characters who are able to make themselves understood through simple and at the same time effective animations in the various interlude movies which, in the absence of any type of speech, also have the task of letting the emotions and the peculiar characteristics of the character of each of them shine through. There are very few lines of text, mostly within the introductory film entrusted to the narrator "voice".

In addition to Meat Boy, it will also be possible to unlock other characters by collecting bandages and completing some “Warp Zone” stages hidden in some of the main levels. These Meat Boy allies are equipped with the most disparate aspects and abilities and will allow you to vary the game experience and the way in which to approach the various levels although none of them are essential for the completion of the adventure for which the protagonist.

In terms of gameplay Super Meat Boy fully falls into the “easy to learn, hard to master” category. It is a title that using only the combinations of two buttons allows you to carry out all the necessary actions within the game: B to jump, Y to run.

Super Meat Boy is fully part of the “easy to learn, hard to master” category.

However it is an apparent simplicity, the levels are structured in such a way as to test the talent, reflexes and patience of the player who will often find himself killing the poor cube of flesh at the slightest mistake in calibrating a jump or even just in the wrong timing to avoid a particularly fast trap, in levels studded with a thousand pitfalls of the most disparate.

There are no time or life limits, therefore the player has the possibility to endlessly attempt the various levels until he reaches the right level of training and knowledge of the map in order to overcome all obstacles. It is quite surprising how structured stages to finish in a few seconds (on average between 30 seconds and a minute, ed) can also take HOURS depending on the player's skills.


The quality of the map design is very high

The quality of the design of the maps is very high: the arrangement of traps and obstacles on the screen is done with a very precise logic so that, however difficult they may be, the levels are never impossible to complete. The difficulty curve of the title is anything but constant, extremely complex levels alternate with others that are more linear and simple that have the function of introducing some mechanics in advance before tackling them later.

Although it is not a title characterized by graphics and breathtaking views, it manages to keep the player anchored to the pad in a close fight against himself: the controls are so precise that, in the event of errors or sudden death of Meat Boy, they will only doubt the skills: those who have the patience are therefore advised to learn the structure of the levels by trying them and trying them again as long as they need to.

Unlike the version released for PC on Steam, Wii U lacks the level editor and access to the Super Meat World portal, which would have allowed players to create and save their own custom maps, further increasing the longevity of the title.

The difficulty of the game, the quality and frenzy of the levels (also given by Meat Boy's running speed) are expertly mixed with a soundtrack consisting of very pleasant and well-made electronic music pieces, always being consistent with the context of the levels in which our hero will find himself risking his skin without ever becoming repetitive or frustrating after hours of listening within the more complex sections.


On a graphic level, the textures are clean and well detailed with the polygonal models of the characters rendered excellently in their graphic style deliberately inspired by the classics of the past both on the small screen of the Wii U pad and on televisions even at high resolutions. The framerate is stable and even in the most “crowded” levels of moving elements on the screen without annoying slowdowns.

Regarding the use of the Pro controller, no significant changes were found in terms of accuracy and response times.

There is no lack of easter eggs and references to other historical titles of the videogame scene of the 80s - 90s, in the introductions to the various game worlds we can find remarkable similarities with the initial movies of Street Fighter II, Pokémon, Bubble Bubble and many others.

Super Meat Boy is a tribute to old school platformers

Some of these tributes, as well as some references to mass computer culture, also appear within the titles of some levels making Super Meat Boy in its entirety a tribute to the history of video games as well as a tribute to old school platformers.

Despite being a valid title and certainly noteworthy, the cost of € 14 for the purchase on Nintendo eShop could alienate the most skeptical players even considering the fact that it is a title with 6 years of releases on its shoulders in formulas between them. almost unchanged.

Verdict 8/10 Blood, sweat and tears Comment Super Meat Boy turns out to be a tribute to the classics of the past, both with easter eggs and with a graphic style inspired by the historical two-dimensional platformers without lacking in innovations. The absence of a screw structure and any type of Power Up help to keep the level of difficulty and challenge of a title that makes level design its strength high: although it is a punitive title, its longevity and difficulties are closely related to the player's skill and patience. Recommended mainly for platformers and challenges lovers. Pros and cons ✓ Inspired level design
✓ Well contextualized soundtrack
✓ Difficulty related to player skill ... x ... for some excessively punitive
x High price given its six years
Do you want to be a video game expert and know all the tricks, guides and reviews for your video games ? Holygamerz.com is a group of video game fanatics who want to inform you about the best tricks, guides and tips. We offer you the best information to be a reference in gaming, so here you can find guides, tricks, secrets and tips so you can enjoy your games to the fullest. Are you ready to get all the achievements of that game that you resist so much? Enter now and enjoy your favorite video game to the fullest!
News + Videogames and mental health - the Oxford Internet Institute publishes research on the subject ❯