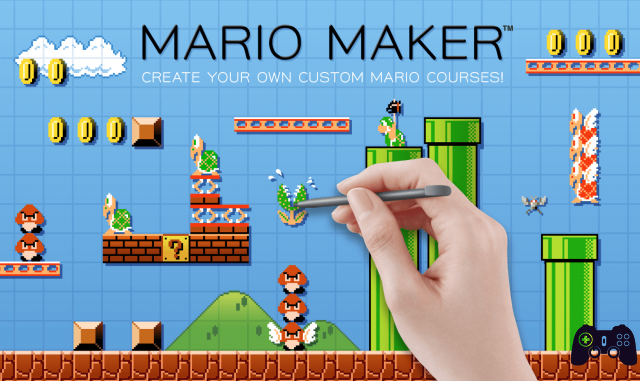 From the first announcement at E3 two years ago (and from our first road test at Nintendo's Post-E3 2014 in Milan) Mario Maker has "grown": trivially, changing its name and preparing for the arrival on the shelves as Super Mario Maker, but above all by composing ad after ad what on paper is a much more extensive play package than that of the simple "level editor of Super Mario Bros." In these days we have had the opportunity to familiarize ourselves with a definitive build of the title scheduled for September 11th: awaiting our final opinion (which will arrive a few days before the release) these are our warm impressions.

we have not yet tried all the available functions, but what we have seen bodes well

The game was said to have grown, but the highlight of the experience is still the level editor that, in addition to the assets of the original Super Mario Bros. and New Super Mario Bros. U (shown at the announcement) allows you to also create levels using objects and graphic style of Super Mario Bros. 3 e Super Mario World. At the beginning of the experience, as soon as the title is started, you will have only one palette of contents available, while the others (together with some functions of the level editor) will be given once a day as long as you have spent at least five minutes in the mode Create within the previous 24 hours. This "Splatoon-style" strategy has inevitably conditioned our tests so far, allowing us on the one hand to fully experience all the elements of Super Mario Bros. present (and related counterparts in high definition) but on the other leaving us the "Entering" the other games only recently and, above all, leaving us at the door and allowing us to use only a few pieces. It goes without saying that all the arguments on the actual richness of the mode are referred to the review, even if what we have seen so far in-game is certainly encouraging.

The key word is freedom

Even with only a third of the potential arrows available in the arc of Super Mario Maker, it is still possible to come up with more than a classic level of the "old Super Mario", thanks above all to two new aspects. The first (and the easiest both to see and to master) is the almost total freedom of action granted by the developers: if before a Lakitu could only launch Koopistrici and from a block it was expected to come out coins (or in any case power ups) in Super Mario Maker old acquaintances come to fall: not only the Lakitu, but practically all the enemies and objects that "produce" weapons or other creatures can throw anything, from the Stars to the fireballs, and the same goes for the blocks that can then "eject" an enemy when they are hit. The enemies themselves can be, before being inserted into a Warp Tube or a Cannon Bill, combined with some objects, for example by wearing wings or enlarging thanks to the traditional mushroom, thus opening up a real ocean of possibilities. The next and almost natural step is to place Mario's various opponents in contexts that are foreign to them. Here too the developers have not complained to the "homework" of allowing the positioning of (for example) Bowser anywhere on the map, but they went further by also creating sets of "anomalous" movements for these circumstances: perhaps the most emblematic case is that of the Goombas, which if on land they are a fairly underestimable force once put under water they become decidedly more fearful, given that you have to deal not only with their new movements (in addition to water) but also with the upward rebound that you suffer when facing them, which in the underwater levels becomes easily dangerous due to thorns, obstacles and various enemies.

The world belongs to the creatives

Fortunately in these first sessions the title did not leave us at the mercy of its editor in the making, thanks to the demo levels preloaded in the game but above all to those made by other users, with its social component. A level editor with this potential without adequate support for sharing content behind us would most likely have left a bitter taste in our mouth, but fortunately we can (almost) say with certainty that this is not the case with Super Mario Maker. Not only is it possible to share your levels (initially with a maximum of 10, which will be raised based on how many "stars" your creations receive from users), but it is also possible to access a series of statistics related to this, such as the number of players who have tried it, the total number of attempts and that of successes (complete with the percentage of overrun calculated from these two data), as well as being able to activate and deactivate a series of notifications to possibly keep an eye on their creatures . Obviously, there is also a content search system, which allows you to organize the library of shared levels by filtering on a global or regional basis, weekly or taking into account all the votes and by difficulty, all within the three popular macro-sections, ranking stars. and News.

The only drawback on this front concerns the "direct" search of the levels, linked to an ID code (indicated at the online sharing of the level) rather than the title or a keyword, re-emerging the old "fetish" of Nintendo for identifiers of this type. On the other hand, the possibility of viewing the levels created by author is very appropriate, selecting them from a ranking (always based on stars and filterable by area and by period) or among the creators of content followed.

And not even to close the possibility of playing a series of levels created by other users without having to look for them thanks to the 100 Mario Challenge (divided into different difficulties that affect the number of levels to be completed to get to the end, from 8 to 16 , as well as on the level of challenge of the same), which allows, among other things, to change levels in real time or almost without losing progress by holding down the minus key or by running a slide on the GamePad touchscreen. In short, on this front one can unbalance oneself more lightly, also accomplices the creations of the users that already abound, quantitatively and qualitatively, even in these first days that see the servers "populated" only by the trade press.

Comment It is useless to go around it too much: these first few days in the company of the assets of the "old" Super Mario Bros. have left us with a great desire to get our hands on the rest as well. The potential of the level editor is so many and you can have fun even after a few days left to play to go "up and running", while almost all doubts about sharing creations have been largely swept away by this test with your hand. Super Mario Maker basically has all the credentials to be the Wii U "Winter Champion", and with titles like Xenoblade Chronicles X and Starfox Zero on the doorstep, that's saying something. Pros and cons ✓ Level sharing works great
✓ Lots of content for the editor ... x ... Which we still have to unravel
x Searching for levels by code: why?
Do you want to be a video game expert and know all the tricks, guides and reviews for your video games ? Holygamerz.com is a group of video game fanatics who want to inform you about the best tricks, guides and tips. We offer you the best information to be a reference in gaming, so here you can find guides, tricks, secrets and tips so you can enjoy your games to the fullest. Are you ready to get all the achievements of that game that you resist so much? Enter now and enjoy your favorite video game to the fullest!
Excalibur guides, where and how to find it - Assassin's Creed: Valhalla ❯

Preview Tell me who you are!