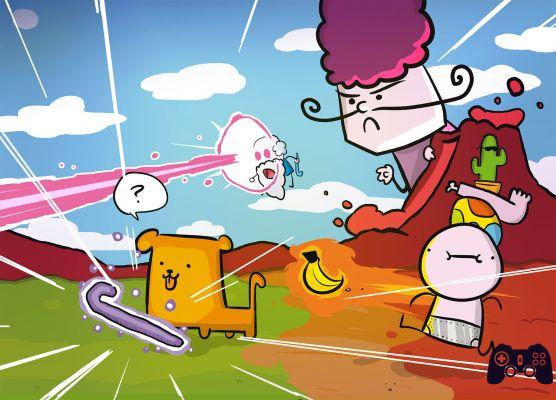 Di Super Cane Magic ZERO di Studio Evil and Simone Albrigi (aka Sio) we have already dealt with more than one occasion, managing to get our hands on a preliminary version of the product already shortly after the conclusion of the campaign on Eppela. We could not therefore not take the ball and return to the topic on the occasion of the arrival of the game on Steam in Early Access, putting the latest effort by the Bologna studio to the test again. What has changed from last November's build?

If last time we had the opportunity to focus on the Arena mode of the title (which, quickly summarized, allows you to challenge each other by playing with up to four players by throwing objects on the map at each other, from stones to Japan),n the occasion of this release in Early Access to attract our attention was the unprecedented Challenge mode, which allows usability in single or even in this case in cooperative up to four players: even with some extra content in fact (we are talking about a new map and some unpublished characters, divided between those accessible immediately and those to be unlocked) for the Arena mode the same considerations made on the occasion of the last preview apply.

Challenge mode is fun despite some technical problems

The Challenge mode, as mentioned, abandons the competitive (even if friendly fire is still present and all the situations that derive from it by playing with some companions) to propose a cooperative experience: the aim is to face the dungeon on duty with the goal to survive the dangers on the map, from enemies to traps, and to work your way up to the inevitable final boss. The basic structure is very similar to that already seen in the Arena, from which practically all the movement features of the character and the mechanics of "throwing things" are taken, given the multitude of objects that can be collected and thrown in these levels, some of these even "breakable" to reveal hidden contents within them. But the possibilities this time are not limited to throwing objects, and indeed everything that can be collected from the ground with the aim of being thrown at the enemy in turn (apart from the enemies themselves) can also be eaten by your character, with consequences ranging from the recovery of health points to the modification of some statistics.

Given the never too hidden inspiration taken from role-playing games such as the old two-dimensional The Legend of Zelda, together with the aforementioned presence of the character's statistics, a system to manage inventory and equipment could not be missing: during our tests we happened to make Coso, Cosa and the other cast members wear both some armor (all very unlikely, from wrestler hair to a protection made of garbage) and on some white weapon, where in addition to a more traditional sword we have having to use a Wok to keep the various enemies at bay. Enemies that already in this preliminary phase show a certain difference based on their "race", with for example those linked to fire immune to the damage caused by a fall in the lava but very damaged in case it is possible to throw them or in any case to make them end up in water, while for all the others the opposite is true (except again for the character of Doctor Culocane who continues to be vulnerable to both liquids, citing one of Sio's videos).

For now we are having fun, and hopefully the frequency of the updates will allow us to continue like this

Summing up in this case too, the final result managed to entertain us as the Arena had already done in the past, despite some difficulties on the controls front. (which the developers are probably also aware of, given the presence of a "panic button" associated with the F7 key which returns the configuration to the default one) and the presence of some visual glitches, however justified by the beta status of the product. Given the landing on Steam, however, at this point we expect a periodic release from the point of view of content, maybe finally making us see something related to the Story mode, to avoid the inevitable repetition danger once you have faced the dungeons present a good number of times.

Comment Super Cane Magic ZERO, also thanks to its propensity for multiplayer (both for the competitive Arena and for the cooperative Challenges) is definitely a fun product, also managing to get some laughs especially among Sio fans. The only perplexities at this point concern the waiting times to be able to see new content, which in our opinion may be the safest way to avoid the danger of repetition (together with some updates more related to the stability of the product). Pros and cons ✓ Arena and Challenge mode for up to 4 players
✓ Some main mechanics are visible ... x ... But we still don't know anything about history
x How often will the new content be?

Do you want to be a video game expert and know all the tricks, guides and reviews for your video games ? Holygamerz.com is a group of video game fanatics who want to inform you about the best tricks, guides and tips. We offer you the best information to be a reference in gaming, so here you can find guides, tricks, secrets and tips so you can enjoy your games to the fullest. Are you ready to get all the achievements of that game that you resist so much? Enter now and enjoy your favorite video game to the fullest!
News Megadimension Neptunia VIIR arrives on PC this fall ❯