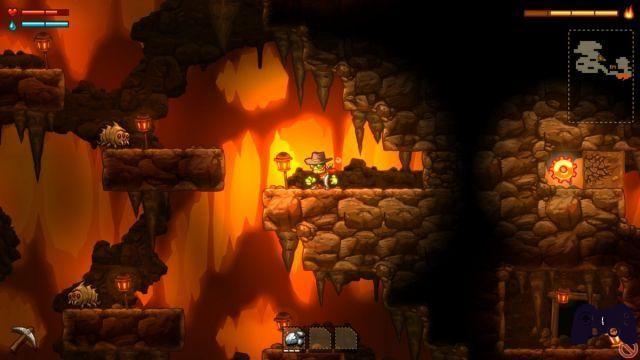 Last August, among the numerous indie titles available digitally on the3DS eShop peeped out SteamWorld Dig: A Fistful of Dirt (now only SteamWorld Dig) developed by the Swedes Image & Form.
Building on the acclaimed success of the Nintendo laptop last December SteamWorld Dig debuted on PC via Steam, showing a new graphical interface and merging the elements of the lower screen into one screen.
Seven months after the first release, the title of Image & Form also arrives on Sony consoles, in a convenient option Cross-Buy, which allows with a single purchase, the possibility of having the game be on PSVita that of PS4.

The protagonist of SteamWorld Dig is one SteamBot (aka a steam robot) just arrived in the town of Tumbleton to inherit a mine from his unfortunately deceased Uncle Joe.
After retrieving the pickaxe from his relative's cold hands, Rusty will enter the mine to discover the secret of the deceased robot.
Rusty will get several power-ups, including an auger and a steam punch, by solving the puzzles hidden in the rooms you will encounter during the excavations; the tools will be upgradeable through the minerals that you will extract on your descent and sell to Dorothy on the surface.
The SteamWorld Dig plot is only a mere outline of the game, which lasts for about six hours at least the first time you face the descent.
The replayability of SteamWorld Dig is determined by the desire to improve your time thanks to the final scores that will test the most experienced players according to different criteria (time, lost lives, coins, globes) and thanks to the minerals that will be repositioned with each new game , thus ensuring an ever-changing adventure.

The gameplay of SteamWorld Dig it is mainly set up as a Metroidvania, that is a two-dimensional platformer in which to continue it is necessary to obtain upgrades to reveal otherwise inaccessible places.
Rusty will have a water tank (expandable) to be transformed into steam to operate the drill and the jet punch, which he can recharge in the rare pools scattered in the mine.
In addition, the SteamBot is equipped with an oil lantern (also upgradeable) that will wear out over time and will be rechargeable only by returning to the surface (using the teleport or simply going backwards the excavated path).
The more you buy upgrades, the simpler the game will become, leaving Rusty the opportunity to defeat the enemies or ignore them to reach the final goal: as already mentioned, the power-ups will be obtained by converting the minerals collected into coins and buying them from the citizens of Tumbleton .
After the first few minutes of the game, necessary to get carried away with the mechanics created by Image & Form, SteamWorld Dig is capable of kidnapping the player e spend hours digging thanks to a simple and addictive gameplay that will surely not make you regret the purchase.

The Good, The Ugly and the Robot

The real and only difference from the version 3DS di SteamWorld Dig is the external appearance, the 2D models are clean and cared for to the smallest detail and stand out defined by the thin black edges thanks to the screen OLED di PSVita, which gives new life to the colors of the adventure of Rusty.
As already happened in the version PC, also on PS4 e PSVita, all the icons on the 3DS touch screen (the mineral bag and the map) are shown on the only game screen, not being invasive at all.
Furthermore, the game has finally been translated into Spanish, although the English used was not complex, it is a further addition for those who have so far stayed away from the title.
The audio sector, on the other hand, has remained the same, with songs that are not memorable but which provide the right western atmosphere to Rusty's exploits.
Unfortunately, no further innovations have been added to these two new versions of SteamWorld Dig, transforming the valuable title of Image & Form into a simple porting.

Verdict 9/10 We look forward to the Fifth Version Comment If you have not yet played SteamWorld Dig in one of its previous versions, this is the right opportunity to make up for it. Between the two versions analyzed, the game gives its best on PSVita, but the cleanliness of the graphics sector is also appreciable on PS4. You will remain, it should be said, buried by the great work of Image & Form, which gives us a new version for one of the best indies of last year. Pros and cons ✓ Well detailed 2D graphics
✓ Addiction assured
✓ Cross-Buy PSVita-PS4 x No big news compared to the other versions

Do you want to be a video game expert and know all the tricks, guides and reviews for your video games ? Holygamerz.com is a group of video game fanatics who want to inform you about the best tricks, guides and tips. We offer you the best information to be a reference in gaming, so here you can find guides, tricks, secrets and tips so you can enjoy your games to the fullest. Are you ready to get all the achievements of that game that you resist so much? Enter now and enjoy your favorite video game to the fullest!
News Minecraft Earth: new mobile game in Pokémon Go style ❯