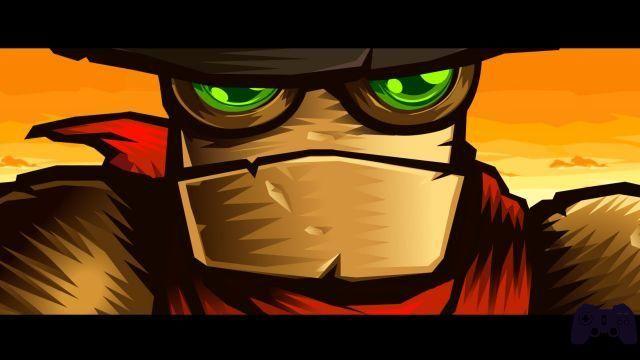 2013 is undoubtedly the year of 3DS: while the eighth generation of fixed consoles appears on the world scene, the Nintendo laptop has amazed with exclusive quality titles setting the law in the portable console market. A further consecration comes from the panorama of indie games. On 8 August a game by the talented Swedes of Image & Form was made available for download. SteamWorld Dig: A Fistful of Dirt is an adventure game set as a platform in two dimensions (for connoisseurs: à la Metroidvania). Excellently combined with the highly successful "digging" mechanics in recent years and with a stereoscopic 3D created in such a way as to make the title even more evocative, SteamWorld Dig promises to be a title that makes fun its strong point. To underline the lack of localization, the game is usable only in English, but even a basic knowledge will allow you to understand the few dialogues present in the game.

Rusty, from Sweden with the Pickaxe

In an unspecified epoch, the Earth is inhabited by robots, created in remote ages by humans, now mythological beings. Rusty is one of them, a Steambot (a steam powered robot) who travels to the Far West to inherit a mine from his recently deceased uncle Joe. More specifically, our hero is traveling to the city of Tumbleton, and once he reaches his destination, his weight will make the ground collapse under his feet, causing him to fall into an underground level that corresponds to the initial area of ​​the mine. Here he will first meet Dorothy, another robot who will show him the way to go to find his now deceased uncle, from whom he will receive the worn pickaxe that had accompanied him in life in that same mine. From this will begin Rusty's adventure in the bowels of the earth. The heroic Steambot will have to go deep and face the dangers of the subsoil by becoming stronger, making Tumbleton flourish again and vanquishing evil, all with a pickaxe (but not only) and the power of steam.

The Vapor is powerful in you.

Descending into the depths of the earth Rusty will initially be accompanied by his pickaxe and a torch used to illuminate. Thanks to them, the steambot will be able, hopping around and fighting the enemies that will appear in front of him, to obtain more or less precious materials. With these materials, once back on the surface, Rusty will be able to gain experience points and purchase upgrades from local merchants. As you can easily imagine, the game will be a succession of underground exploration and consequent ascent to the top, by teleportation or manually, which is why you must always pay attention to how you dig, in order not to get stuck and having to resort to an inevitable self-destruction. In the underground Rusty can also find power-up rooms (Metroid style, to be clear) in which to collect new gadgets: from a brand new drill (strictly steam operated), to the Steam Punch, which can be upgraded with the fruit of hard excavation work, passing through modules that allow running, particularly high jumps and double jumps. Most of the extra skills and gadgets will be available at the cost of a certain amount of water (to be transformed into steam), which can be recharged by immersing our Steambot in pools present throughout the mine. By leveling up and purchasing gadgets for our favorite Steambot, new traders will come to town, allowing Rusty to become the perfect miner. To become "the best, like never before" our friendly neighborhood Steambot will need to collect stones and minerals to sell to the beautiful Dorothy (which will then be converted into experience points in addition to money), but also "Orbs" or energy spheres (blue) essential to buy certain movements, located in areas of the mine or in hidden blocks. The upgrades that can be purchased range from modules that expand the energy, water supply or duration of the torch to the enhancement of damage to enemies or those to the ground. Together with the gadgets and the increase in their effectiveness, the challenge level of the title will also increase, placing the player in front of an exploration that must be careful and reasoned, without overdoing it. Exploring every corner of the mine will be a goal that every player will feel compelled to achieve, also given the addictive succession of character exploration and development mechanics, remembering, however, not to underestimate the dangers that Tumbleton's underground hides. In terms of duration, Rusty's odyssey stands at 7-8 hours on average, which becomes about 12 if you want to take all the necessary upgrades. Replayability in the same game turns out to be quite low, no collectibles or extra activities in the city make the title completely simply finished once all the upgrades have been acquired.

The use of 3D in Steamworld Dig is admirable, the sense of depth is rendered perfectly and the effect even in motion does not tire the view. The very colorful graphics and cartoonish style make the title satisfying to the eye and if possible even more likeable. The soundtrack has no noteworthy pieces, but it knows how to accompany Rusty and the gamer in those few hours that the gamer will spend together.


Verdict 9/10 Drill it all! Comment Steamworld Dig is 3DS 'indie par excellence. For the hours that the gamer will dedicate to the title, the exploration of the subsoil of Timbleton will be a pleasant adventure. Parallel to the exploration and enhancement of Rusty the level of challenge of the title increases adequately making it satisfying to progress in the game. The indie of Image & Form is ultimately the adventure that every 3DS owner must live, in a world where robots and steam are the masters. The descent into the subsoil of Timbleton causes addiction and stimulates the player to a continuous research and exploration. In short, if you have a 3DS you must not miss the opportunity, the game is absolutely worth the candle, and may the steam be with you. Pros and cons ✓ Great adventure / platform mix.
✓ Well done exploration.
✓ Impact graphic style.
✓ Addictive mechanics. x Low replay value.

Do you want to be a video game expert and know all the tricks, guides and reviews for your video games ? Holygamerz.com is a group of video game fanatics who want to inform you about the best tricks, guides and tips. We offer you the best information to be a reference in gaming, so here you can find guides, tricks, secrets and tips so you can enjoy your games to the fullest. Are you ready to get all the achievements of that game that you resist so much? Enter now and enjoy your favorite video game to the fullest!
InFAMOUS 2 review ❯

Battlefield V Review - One for all, all for one

Add a comment from SteamWorld Dig: A Fistful of Dirt (3DS) review