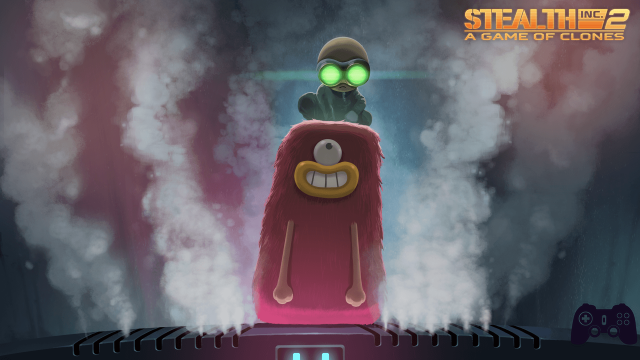 Curve Digital in recent years has been among the most productive independent studios, both on PC and on consoles, offering constant entertainment with a wide range of titles both personal and secondary teams of which it has taken care of the various ports: from The Swapper and Qora , passing through Lone Survivor, Iron Fisticle, Titan Attacks and arriving at the acclaimed Stealth Inc.
After the success of Stealth Bastard and its deluxe version Stealth Inc .: A Clone in the Dark, last October the second chapter of Curve Digital's intellectual property debuted as a temporary Wii U exclusive.
Stealth Inc. 2: A Game of Clones fully convinced us, thanks to a clever use of the Nintendo console Gamepad and a metroidvania structure.
During April Stealth Inc. 2 has also landed on other platforms (PC, Playstation 4, PlayStation 3, PlayStation Vita and Xbox One): on those of Sony, for € 14,99 you can take home three versions thanks to the cross-buy, it is also available a special pack for € 16,99 that allows you to get your hands on the first chapter too. Let's find out if this second version of the Curve Digital clone lives up to the original.

I was happy then you were born

Unlike what we saw in the first chapter, which saw the player solving test rooms one after the other in a general menu, in Stealth Inc. 2 Curves he wanted to add a supporting plot and an overworld in which to move the little protagonist.
The test subject will find himself involved in a rivalry between colleagues: the second in the ranking for productivity at PTI wants to reduce the number of clones of the best worker in the industry and what better way than to exterminate the poor and unsuspecting gray hominids? Exploring the PTI Industries the protagonist will come across the classic rooms already seen in the first chapter, to be completed in the shortest possible time and in the meantime trying not to die or be discovered by the cameras, under penalty of a lower evaluation. 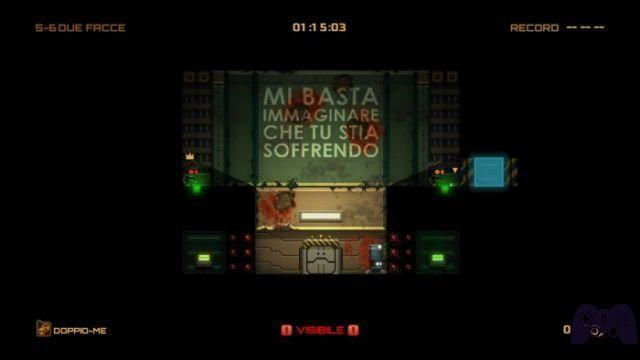 The writings on the walls also return, characteristics of the first chapter and capable of snatching more than a laugh from the player, through insults and acid jokes, an excellent translation into Spanish allows any player to enjoy the wickedness of the interlocutor of the clone.

phrases on the wall to be shattered

Not only that, the six huge main locations of PTI Industries hide more than one secret (and collectible), and as the fat clone gets new gadgets it will have access to areas previously unreachable as in any other Metroidvania.
Each area has eight doors (plus two secret ones) and is dedicated to a particular gadget, once the eighth room is completed, the tool in question will become part of the inventory and can be used in the overworld.
While completing the levels may not be too difficult (although many tests will put a strain on your reflexes and ingenuity, but more on that in a moment) getting a high rating will require all the talent and accuracy, as well as a excellent hand-eye coordination.

What did you find this time?

Unlike the first chapter, which saw our clone face turrets, rotary saws and lasers having only darkness as almost the only ally, in Stealth Inc. 2 the mechanics become more interesting thanks to the inclusion of five gadgets (plus a secret one ) on which the puzzles of each area of ​​PTI Industries will focus.

titanic but at the same time satisfying undertaking

If in the test rooms our hero will be able to use only a specific gadget, in the overworld he will be able to select those obtained thanks to "Triangle", although unfortunately he can only use one at a time, without adding the effects of the tools. You will find yourself as well as in any self-respecting Metroidvania to retrace your steps to collect the previously unattainable costumes, using the inflatable friend to jump higher, the adventure light to illuminate dark areas, or the teleportation to save you the strenuous climbing. 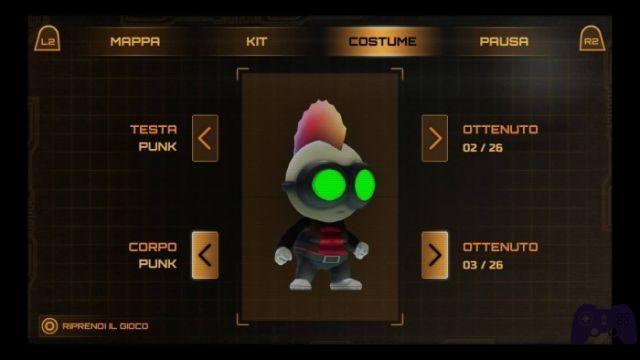 Each test, on the other hand, will test ingenuity and ability to react: your clone will die, over and over again, if you do not learn perfectly the location of obstacles or the trajectory of the lasers. As if that were not enough, in each level other clones are imprisoned, and in order to have access to the last gadget (which we do not reveal to you) you will have to save them all. A titanic but at the same time satisfying undertaking, especially once you start collecting the very difficult S, managing to make the most of the shade and ensuring the completion of the room in the shortest possible time.
Once a room has been completed, whatever the rating is, it will be available in the main menu, in the level selection area, which calls up the interface of the first episode.

I just imagine that you are suffering

As in the version released last October, there is a level editor, which will allow you to create your own test rooms, with lights, shadows, obstacles and objects of your choice: unfortunately, the editor's approach proved to be little user friendly, especially given the absence of a confirmation that the level can be completed before it can be loaded (as happens in Mario vs DK or in Pullblox World).
And until now, Stealth Inc. 2: A Game of Clones it turned out to be identical in all respects to the Wii U counterpart released last year. Unfortunately there is a big difference with the Nintendo version: the absence of the co-operative mode.

Not only that, multiplayer is completely absent, not allowing you to take advantage of the help of a companion and relegating the protagonist to replace a possible friend on the sofa with the clone maker. An absence that does not undermine the total experience of the game, but which is a minus compared to what is offered on the Nintendo eShop. As a small replacement, on PlayStation 4 the Curve Digital title uses the LED sensor on the back of the Joypad, changing its color according to the status of the little protagonist, like the glasses there are therefore three shades: green for the invisible, orange for the little visible and red for when you are completely within the range of your opponents. A little gem that does not compensate for an excellent co-operative, but which in the dark adds an appreciable touch of atmosphere.

Verdict 8/10 Too bad you can't clone codes Comment If you don't own Wii U, Stealth Inc. 2: A Game of Clones is a title to try at any cost, especially if you like metroidvania and trial and error games. The Curve Digital title can offer a constant and satisfying challenge, and will keep you busy for about ten hours (double if you aim for the precious "S"), cheering you up with sadistic jokes and immersive atmospheres. If, on the other hand, you are equipped with the latest Nintendo home console, and you have a friend with whom to try the title, we recommend purchasing it on the eShop, in order to enjoy a magnificent and equally sadistic co-operative. Pros and cons ✓ Balanced and rewarding level of challenge
✓ Sadistic and engaging comedy
✓ Well thought out puzzles ... x ... Although some require too much precision
x Absence of the Co-op
x Not very user-friendly editor
Do you want to be a video game expert and know all the tricks, guides and reviews for your video games ? Holygamerz.com is a group of video game fanatics who want to inform you about the best tricks, guides and tips. We offer you the best information to be a reference in gaming, so here you can find guides, tricks, secrets and tips so you can enjoy your games to the fullest. Are you ready to get all the achievements of that game that you resist so much? Enter now and enjoy your favorite video game to the fullest!
Steins; Gate Review ❯

Dishonored Review: Death of the Outsider

Add a comment from Stealth Inc. 2: A Game of Clones review (PS4 and Xbox One)