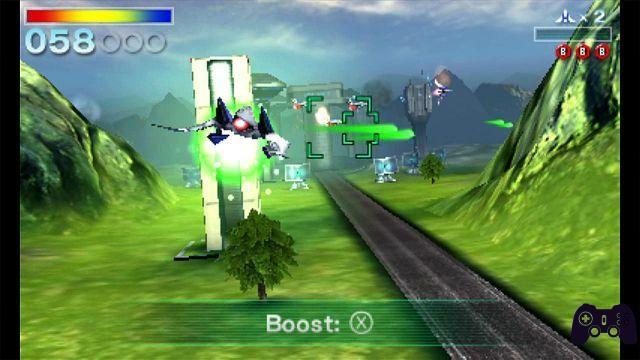 It is undeniable that for several years the StarFox series has been in constant decline: 3 subsequent lackluster episodes had overshadowed the star of what during the years of SNES and Nintendo 64 seemed to be the promising new Nintendo franchise. What better way to reverse the course than to refer to the N64 episode, universally considered the pinnacle of the series, with a remake that arrives on 3DS at a strategic moment between the end of summer and the autumn wave of titles?

Developed in collaboration with Q-Games (strong from some of the developers of the first StarFox for SNES and already authors of StarFox Command for DS), StarFox 64 3D is presented not as a mere graphic upgrade but with some substantial news. Let's proceed in order.
For those who have never played the classic N64, the gameplay of the historic title is similar to that of arcade scrolling arcade shooters: the only difference is that the title is in 3D and that the scrolling along the levels does not occur horizontally. or vertically, but in the direction of depth. The levels are a fixed path (at most with some crossroads) from the start to the possible boss, and even if the player cannot deviate from it, he is free to move left and right, up and down, to slow down and to accelerate. With one button you control primary fire, a laser that can also be charged in a homing shot, and with another you release a powerful smart bomb capable of clearing the screen of enemies. Finally, some acrobatics are possible to escape enemy fire such as looping or spinning (the infamous "barrel roll"). There are the usual amenities of the genre, such as upgradeable power-ups scattered throughout the levels, wingmates who more than come to our aid need our constant protection, waves of enemies, colossal bosses and so on. The variety in the levels is guaranteed by the inclusion of some sections in which we will not be aboard the Arwing starfighter but we will enter aboard the Landmaster tank or the Blue Marine submarine, and also some phases in which we will enter the "all-out mode. ”, In which we will be free to move in all directions within arenas, facing particular bosses or enemies.
As in all self-respecting arcades, longevity is not given so much by the length of the game as by its replayability. In fact, StarFox 64 can be finished in about 40 minutes (!), But a typical play includes only 7 of the levels present in the game. To see the others, more games will be needed, in which we will have to complete secondary objectives or take alternative paths. Improving the score is also a stimulus to replayability: passing a certain score in each level will earn you medals. Once you have earned a medal for each level, a new game difficulty can be unlocked.

The additions made to this basic skeleton, perfect in its simplicity and in its textbook level design, were of 2 types: cosmetic and structural. With the former we mean the incredible work of updating all the textures of the game, and the addition of the shaders allowed by the 3DS: it is amazing how simple N64 geometries enjoy new life thanks to so little. While its N64 gaming origin remains always clear, the new graphics make some levels at times astounding, also thanks to an always constant frame rate and a 3D effect that at the moment is the best ever seen on the Nintendo laptop. On the sound front, if on the one hand Koji Kondo's splendid music has remained unchanged, on the other hand it is painful to discover that the entire game has been re-doubled in Spanish. At the time of its release on N64, StarFox caused a sensation because it was one of the first games on the platform to be dubbed and its English dub, actually clumsy and ridiculous, over the years became legendary and the source of various internet memes ("Do a barrel roll! "). The new Spanish dub is itself clumsy and ridiculous, with voices that sound like they come out of a protected band cartoon and outrageous exclamations, but it fails to be unintentionally funny like the original one. It is possible to change the language on the console to play the game in English, but even in this case we are faced with a new dubbing. The same actors of the original version have been recalled, but the years have passed, and the final rendition is sadly not the same.
From the point of view of the gameplay, the main addition is the introduction of an alternative control system, based on the gyroscope present inside the console: it is sufficient to tilt the 3DS in the various directions to make our spacecraft veer. Unfortunately, this new control method (fortunately optional), brilliant on paper, proves rather inaccurate. Furthermore, having to continually move the 3DS means that you continually lose the "soft spot" for the 3D effect and are therefore forced to deactivate it. Another important addition is the multiplayer mode. While the single player mode has been kept very faithfully similar to the original, the multiplayer mode has been completely renewed. The game offers 3 different types of deathmatches, by points, by screw or by time, to be faced with friends (only one game cartridge is enough for 4 players) or alone against bots. The levels, presented according to the "full-field mode" were made completely from scratch, and the game uses the internal camera to take snapshots of our faces in the highlights of the game. Unfortunately, this is only possible locally, as the game completely (and incomprehensibly) does not have an online multiplayer mode.

Verdict 8/10 DO A BARREL ROLL Comment When faced with the remake of a great game like StarFox 64, it is always difficult to evaluate. In this case, on one side of the scale we have the game skeleton, which is essentially the same as the old masterpiece, a really pleasant renewed graphics, and an almost infinite longevity. On the other hand, we have a whole series of changes or additions, which if well-intentioned, do not turn out to be a real improvement to the experience. The new control system is not without its problems, and after trying it for a while anyone will almost immediately revert to the standard one. The new dubbing does not have a shred of the charisma of the historical one, and finally the merits of the new multiplayer mode are nullified by the absence of online. Ultimately to whom to recommend StarFox 64 3D? Surely to the fans of the old title who may have always wanted a portable version. Or even to those who intend to approach this series for the first time: there is no better way than this title to do so, bearing in mind that given the uselessness of many of the additions, the original version - equally valid - can be found at a much lower price on the Nintendo Wii virtual console. Pros and cons ✓ Great graphical update
✓ Best 3D effect currently available
✓ Impeccable soundtrack
✓ Anomalous and (almost) infinite longevity
✓ It remains an excellent title x Absence of online multiplayer
x New control system unusable
x Bad Spanish dubbing ...
x ... As well as the one in English, remastered

Do you want to be a video game expert and know all the tricks, guides and reviews for your video games ? Holygamerz.com is a group of video game fanatics who want to inform you about the best tricks, guides and tips. We offer you the best information to be a reference in gaming, so here you can find guides, tricks, secrets and tips so you can enjoy your games to the fullest. Are you ready to get all the achievements of that game that you resist so much? Enter now and enjoy your favorite video game to the fullest!
Thimbleweed Park Review ❯