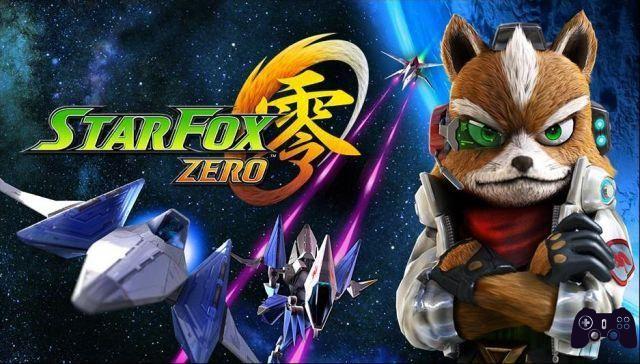 A week after its launch in stores, here we are talking about the expected Star fox zero, new chapter / reboot of the Nintendo space saga coming to Wii U the next 22 April. Let's be clear. If there was a Nintendo IP in desperate need of a relaunch (excluding Metroid; Other M did its damage to the franchise, but that's another story) it was Star Fox. After the SNES and N64 episodes, true and adrenaline-pumping arcade masterpieces, the series had taken a somewhat strange turn. First Rare's Star Fox Adventures, actually a linear and banalotto Zelda clone, with Star Fox characters slapped on top at the last minute. Then it was the turn of Namco, who with Star Fox Assault gave us a game that was 30% the natural evolution of Star Fox 64 and the remaining 70% a confused and chaotic arena shooter that nobody had asked for. Finally, the unfortunate Star Fox Commando on Nintendo DS, which completely distorted the arcade attitude of the levels aboard the Arwing, resting on an exhausting repetitiveness and bringing the series to a narrative dead end, with dozens of alternative endings, a cast of characters unmanageable and a fanfiction level writing. After a few years' pause for reflection, interrupted only by the remastering of Star Fox 64 on 3DS, Shigeru Miyamoto, true patron of the series, has decided to pick up the situation, make a clean sweep of the drift taken with the various sequels and start from the basics of a good Star Fox, perhaps also taking the opportunity to insert some gameplay dynamics based on the interaction with the second screen and the motion controls.

The final result of this alchemy, to achieve which Nintendo made use of the collaboration with a renowned studio such as Platinum Games, it's Star Fox Zero. The first few minutes of the game are enough to realize that you have in your hands the most authentic Star Fox in nearly twenty years. Under your eyes, images of the planet Corneria sweep by, devastated by the robotic armies of the mad scientist Andross, as the Star Fox squadron whizzes through a level that is in part re-proposal, in part update, in part also subversion of what was the initial level of Star Fox 64. For almost two decades the saga has sought alternative solutions to its arcade nature, perhaps fearing that the end of the era of arcades would negatively affect its appeal, and in doing so it has progressively distorted. We are in 2016 now, what's old is current again and Star Fox Zero is finally not afraid to be fiercely arcade. So here we are aboard the Arwing spacecraft, the scrolling of the level blocked on rails in the direction of depth, waves of enemies, 90s dialogues. Everything like then? Not exactly. Star Fox Zero took its first steps as a game prototype made by Miyamoto to demonstrate the potential of the Wii U GamePad. Traces of this design survived in the final title. We realize it immediately: the automatic gestures gained over years of replay of Star Fox 64 lead us to touch the back keys to perform the screwing; with great surprise the left backbone will instead be the lock on of the camera on an enemy, while the right one will be the button to fire. The right stick will control the movement of the vehicle, while the left stick will control the brake, throttle, turns and twists left and right. The front keys will be used for maneuvers such as somersault and U-turn, as well as to transform the vehicle into its alternate form and center the front sight. This last operation will be necessary because for the first time the focus of the spacecraft will also be orientable in different directions from that of our sliding. To do this we will use the gyroscopes of the Wii U GamePad, a bit like the motion controls on Splatoon, complete with a view inside the cockpit on the paddone screen.

It is not said that "innovative" is also valid

If this innovation doesn't get too much attention during the more traditional levels (except for the occasional irritation of having to recalibrate the viewfinder) it becomes predominant whenever you enter full-range mode or face a boss. In these situations we will often find ourselves with a “cinematic” camera to film the general action, and we will have to rely on the paddone's view to direct our shots and movements. As interesting as it is on paper, this solution seems to be not very intuitive and rather cumbersome: the continuous multitasking between the two views confuses the player's ideas, deprives him of the crucial precision in some circumstances and does not add any note of merit to the gameplay of the title. It is possible that with more hours of play on its shoulders and a little bit of habit at the end this manual viewfinder becomes more natural, a bit like it did with the motion controls on Splatoon, but it is good to remember that if in that title it could even do without, here the gyroscopes of the paddone can never be completely deactivated: some sequences of Star Fox Zero are built specifically around this control system, with all that that entails.

The other big news of Star Fox Zero is the convertible vehicles. In fact, all the vehicles in the game have an alternative form, specialized in dealing with certain situations. The Arwing will transform into a quick Walker, suitable for ground missions; the Landmaster can become a hovercraft, while the new entry Gyrowing will have a remote controlled robot. These vehicles and their transformations allow one great variety of situations between one level and another and within the levels themselves. By transforming at the right time, for example, it will be possible to access alternative routes. Other levels, on the other hand, will have a very particular structure and rhythm, like a stealth-colored mission on the planet Zoness, in which we will have to deactivate light cones using Gyrowing and a robot. Each level contains within it several medals to collect by completing certain quests. Collecting all the medals and unlocking all the alternative paths, as in the tradition of Star Fox 64, will help to maintain the longevity of the game, which however initially presents a number of missions comparable to that of the classic N64. Finally, we cannot fail to mention the Amiibo compatibility of the title. Tapping the Fox McCloud Amiibo on the paddone will unlock a retro variant of the Arwing, with the look of the Star Fox spaceships for SNES. With that of Falco Lombardi, however, we will get a ship with an alternative color, capable of more powerful attacks, but with reduced health. Finally, as regards the technical sector, the general impression is satisfactory, even if not exciting. The development team has given priority to fluidity rather than various graphic trappings. The final result is convincing, but with a reduced impact. On the other hand, the music is good, with many reinterpretations of classic themes, and a very high level dubbing.

Comment A title like Star Fox Zero was needed precisely for the Nintendo space saga. Making a clean sweep of all the inadequacies that had slowly made their way into the series was no longer postponable. Star Fox Zero takes the most successful chapter of the saga, Star Fox 64, by comparison and model. It imitates it, pays homage to it, plays with its contents, sometimes re-proposing them, sometimes distorting them. It puts the player in front of a varied and always unpredictable adventure. There are some contrasting elements in this design: the introduction of the second screen and motion controls feels forced and poorly blended into the game. Hoping that it is just a matter of habit, we refer you to the next review of the game for the final verdict. Pros and cons ✓ Tabula rasa of all the absurdities that had accumulated with the last few chapters
✓ It takes a lot of footage from Star Fox 64
✓ Fast, adrenaline-pumping, bloody arcade
✓ The first real Star Fox in nearly twenty years x Forced motion controls and second screen
x Graphically, one could dare a little more

Do you want to be a video game expert and know all the tricks, guides and reviews for your video games ? Holygamerz.com is a group of video game fanatics who want to inform you about the best tricks, guides and tips. We offer you the best information to be a reference in gaming, so here you can find guides, tricks, secrets and tips so you can enjoy your games to the fullest. Are you ready to get all the achievements of that game that you resist so much? Enter now and enjoy your favorite video game to the fullest!
Guides Complete Guide to Objects - Persona 5 Strikers ❯