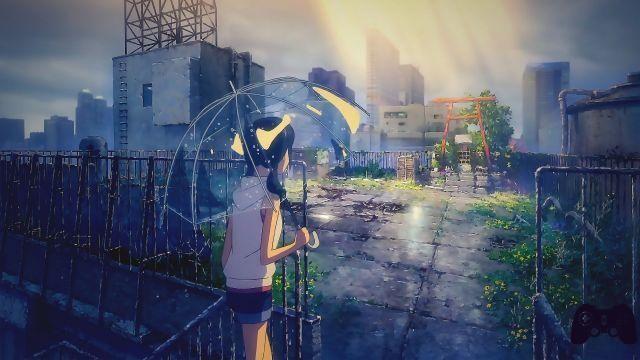 After Your Name, there was inevitably a lot of anticipation for Weathering with You. But Shinkai got stuck ...

Makoto Shinkai, on the strength of the enormous success obtained with the previous Your Name, returns to the cinema with Weathering With You. The distribution formula chosen by Nexo / Dynit is the same we have been accustomed to for years: only three days in the room (although it was recently announced that, given the great demand, two additional dates will be added in November), which although few have allowed him to reach second place at the box office.

Weathering with you tells the story of Hodaka, a sixteen-year-old boy who escaped the monotony of his hometown to look for work and fortune in Tokyo. Japanese summer is unusual, and the sky presents a long series of strange atmospheric phenomena that torment the population. The most obvious problem is the incessant rain that has hit the archipelago for weeks.
Hodaka finds work as a writer for Mr. Suga's magazine, and as he investigates the mysterious summer rains he discovers the existence of the bearers of serene, young women with the ability to manipulate the weather thanks to the power of their prayers. Intending to find out more on the subject, Hodaka runs into Hina, an orphan who lives in the city with her younger brother and who seems to be a bringer of peace.

Shinkai, since its inception in '98, has always made one great difficulty in finding the recognition of the general public, and has always been a little-known director outside his country (especially when compared with illustrious colleagues such as Miyazaki and Hosoda). Everything changes with Your Name, which in a short time becomes the fourth best-selling film in the history of Japan and The best-selling Anime movie ever. Net of the fact that Your Name was a film with more flaws than merits, it was a work that was coherent with the ideas put forward by Shinkai in his career. You could tell him everything, but not that he didn't have a clear vision of his work and his message to bring to the world.

Weathering with you's Makoto Shinkai, on the other hand, seems to have forgotten that consistency and has produced a disappointing, sometimes banal and, above all, film. not at all brave.

To learn more:
Your Name. The Phenomenon that has conquered Japan The main theme is no longer the lack of communication between man and woman, much less the distance that wears down human relationships. The focus of the film is the feelings. Not that there is anything wrong, for heaven's sake; the problem lies in the superficiality with which these feelings are told and staged, also the fault of a really poor writing at times.

Shinkai has always used it very effectivelyeloquence of gestures and expressions to be able to communicate what their characters could not communicate, either because they were unable or because they were unable to do so. This is one of the most important and recognizable elements of her works, since the time of her and her cat, in which the stillness or simply the posture of the "she" of the title they communicated a lot of his interiority and his state of mind without the need for these aspects to be explicitly stated, and in Weathering with you this detail is almost completely absent.

It almost seems that Shinkai, struggling with a film in which time and space do not interfere with the communication of the protagonists, has found himself in difficulty, and has opted for a more discharged and less eloquent staging. Another cornerstone of Shinkai cinema is, always, the sky: in almost all of the director's films, enormous importance has always been given to the representation of the celestial vault. Just think, for example, of Your Name itself or 5 cm of the Second and Voices from a Distant Star, in which the aesthetics of the sky is treated in a maniacal way precisely because it is a metaphor for the loneliness of its characters, their isolation and barriers. insurmountable that divides them. In Weathering with you, despite the weather being in effect the protagonist of the story, the skies seem less manicured (let's be clear, technically speaking their realization is flawless as always), less central.

Weathering with you
On amazon: 14,25 € buy It is a shame, especially because in the current era in which the defense of the climate has finally reached the importance it deserves, we would have rightly expected a decidedly different attention for certain issues, which however seem to be kept out from the picture almost by force.

Not that it is up to me to impose on a director which themes to deal with, for heaven's sake (no pun intended), but it is clear that an environmentalist reflection is there around the corner and that absolutely nothing has been done to highlight it.


In short, Shinkai's latest effort turns out to be a decidedly subdued film, often almost childish and that struggles to find a prominent place in the filmography of a director who, like it or not, has always had something to say and has always done with personality.

The impression I had in the room is that Shinkai has decided to support the commercial success of Your Name, sacrificing form and content in favor of an immediacy and a certain degree of banality closer to the general public rather than to the niche that always supported it.

Do you want to be a video game expert and know all the tricks, guides and reviews for your video games ? Holygamerz.com is a group of video game fanatics who want to inform you about the best tricks, guides and tips. We offer you the best information to be a reference in gaming, so here you can find guides, tricks, secrets and tips so you can enjoy your games to the fullest. Are you ready to get all the achievements of that game that you resist so much? Enter now and enjoy your favorite video game to the fullest!
Stories review: The Path of Destinies ❯

Add a comment from Special Weathering with You: little coherence, little courage