Special The Mule is all the best of Clint Eastwood

After the ideal trilogy on modern American heroes, Eastwood returns in front of the camera with a masterpiece that enhances all his poetics.

Clint Eastwood arrived at that moment in his career where you no longer want restrictions, and you understand that because he doesn't even seem to be acting, and probably doesn't even try. Eastwood is a very amused one of The Mule (Il Corriere) over the top in playing an equally incredible character, Earl Stone, alter ego of Leo Sharp, ninety-year-old drug courier out of necessity. The very fact of retracing his footsteps without having to trace them in carbon copy gave Clint the opportunity to put a lot of himself into the character, coming to give us an extraordinary, sumptuous, unrestrained, even self-ironic proof. And despite what you don't see in the trailers, which are set to show mostly the dramatic side of the film, you laugh a lot, either for Earl's genuineness, for his cynicism and sense of humor, or for the absurdity of situation in which he will find himself entangled and how he will experience it.

After a successful life in the field of floriculture, on whose altar he also sacrificed the affection of his wife and daughter ("they are your friends who were able to experience the bright and funny Earl"), the economic crisis takes away the real love of his life, his business, his home. Alone but never shot downrather cheeky, he decides to visit his niece, the only woman in his life who does not despise him. The engagement party that anticipates the next wedding, which becomes an opportunity when a friend of the niece approaches him by providing him with contacts, in case he wants to earn some money by driving, he who has never taken a fine in his life by grinding thousands of kilometers on the roads of 48 states out of 50. Stone doesn't ask many questions, not even when at his workplace, a garage adjacent to a gas station, he is greeted by three Hispanic men, armed, clearly affiliated with the Sinaloa cartel. The rules are simple: take this bag to this hotel without peering at its contents for any reason, get out, leave the keys in the dashboard and come back after an hour to find an envelope full of cash. Earl's nonchalance is wonderful, the certainty of having little to lose and the spirit of an adventurer. What begins from that moment is a brilliant road movie, pursued by the investigations of Colin Bates (a great Bradley Cooper rightly in the background for most of the 116 '), DEA agent, on the trail of the most active and elusive "mule" of the cartel, and perfectly broken by family interludes in which Earl will realize that he has little time to recover the affection and respect for his women. 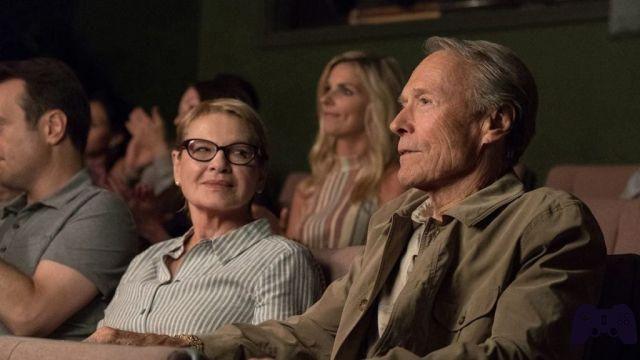 It's great how you walk naturally, and keep all the Eastwood director's class, from tense crime scenes to hilarious private parties in Mexico, held in the boss's mansion. Latòn (Andy Garcia) with Stone as guest of honor, surrounded by prostitutes, alcohol and drugs. Eastwood also makes fun of his being a republican, meeting on his way a couple of color, lesbian bikers, and above all working for Mexicans who are perfectly integrated into the American criminal fabric, with delicious and highly sensitive curtains. The tension, however, grows constantly, perhaps in a somewhat 'steep, not caring about the times we are used to the cinema, giving much more space to comedy than you would expect, but it is so beautiful. The thrills of the finale, which remembers for pathos that of A perfect world, always directed and interpreted by Eastwood, are something that you do not shake off as soon as you leave the room.

That look there, that of the ice-eyed Texan, is today more penetrating and proud than ever, underlined by the signs of age, by an apparent fragility that only serves to camouflage an immutable verve and talent. It is the history of cinema, and Clint Eastwood with The Mule has written another page. Exceptional, exciting, sparkling, perhaps the freest film I have ever shot and performed, certainly one of his masterpieces.

Do you want to be a video game expert and know all the tricks, guides and reviews for your video games ? Holygamerz.com is a group of video game fanatics who want to inform you about the best tricks, guides and tips. We offer you the best information to be a reference in gaming, so here you can find guides, tricks, secrets and tips so you can enjoy your games to the fullest. Are you ready to get all the achievements of that game that you resist so much? Enter now and enjoy your favorite video game to the fullest!
Mario Party Review: Island Tour ❯