Special Super Mario Odyssey under the microscope: History and mechanics 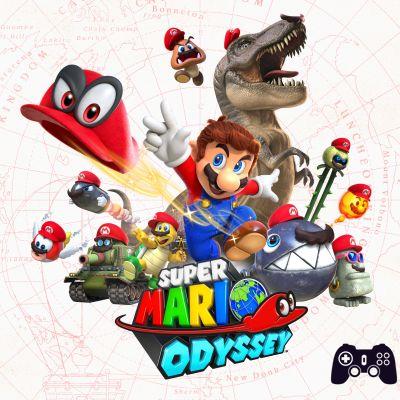 We've all seen the spectacular new trailer for Super Mario Odyssey (which we propose below). What Nintendo has opened is a veritable treasure trove of new content, so dense and rich that it is difficult to find your way around. In this special we want to do just that: analyze and explain every detail that populates the trailer in question and the gameplay provided by Nintendo Treehouse. To help us will be one of the most glaring oddities of the presentation, namely the sung theme "I'll be your 1-Up Girl", which provides an effective synthesis of the soul of the game.

It's time to raise our sails

The game opens with the kidnapping of Princess Peach, again by Bowser, who this time seems willing to set up a forced marriage. The January trailer suggested that, in the opening words, Mario will be able to reach the flying boat where the princess is held captive, but will lose a first fight with the King of the Koopas, who will pulverize the iconic red hat and throw the poor plumber off the his vessel. Awakening in a place of great atmosphere, which we will later discover is called Cap Kingdom, Mario will meet Cappy, a tuba-shaped demon, who will repair his hat and accompany him around the world aboard the Odyssey, the spaceship. “Cappelliforme” which gives its name to the whole game. The two will visit different kingdoms in search of the various Power Moons, the fuel needed by the Odyssey to reach its destination. The duo will repeatedly clash with the Broodals, the evil wedding planner bunnies at Bowser's service, whose employment contract includes "annihilating any threat to marriage." 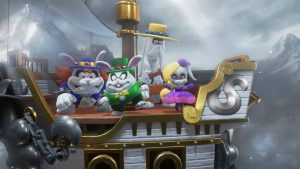 The henchmen on duty, dressed in early 900s clothes 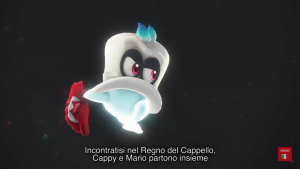 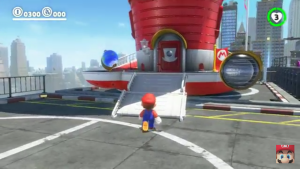 Marriage in sight for Mario?

But the plot does not end there: Mario will meet several characters around the world, in what promises to be a cast worthy of a real adventure. One above all, an unexpected apparition, the one who originally pushed Mario to challenge fate for love, the first flame of the then Jumpman: Pauline, the damselle in distress of the Donkey Kong coin-op. This girl, who Miyamoto created four years before Peach, is here relieved of her stereotypical role and placed in the footsteps of the mayor of New Donk City, the metropolis symbol of the game. Pauline will commission some missions to the protagonist (the nature of which we will talk about later), and it is she who sings the song that accompanies the trailer. This sweet piece with a jazzy rhythm, aimed at Mario himself, also hides a romantic theme: “every journey starts a new romance; a new one's calling out for you ”(with every journey a new love, and one is calling you). Could the woman recognize the signs of the ancient flame? To give a twist to the story, the Mario and Peach amiibo made for the game are both in wedding suits, a wedding between the two is probably planned, destined to put an end to 32 years of ambiguous relationships and "pelvis on the nose". Maybe Pauline will finally have to turn the page, even if it is possible that the love she talks about is referring to the historic Nintendo couple of plumber and princess. 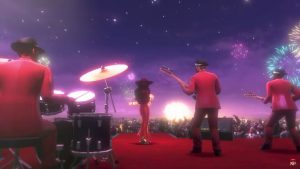 Pauline and the band on the roof of New Donk City. 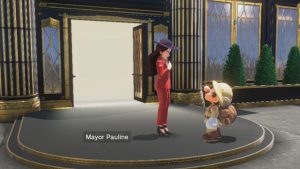 The mayor of New Donk. 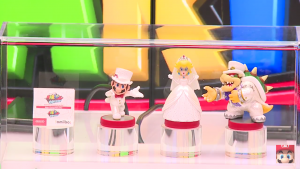 Wedding amiibo, made for play.

Obviously this is about plot speculation, traditionally a secondary element of the Mariesque adventures. I would avoid theorising on the matter if it weren't for the revolutionary nature of Odyssey: the game doesn't necessarily have an elaborate plot, and in that case it was worth spending a few words.

EAD Tokyo had very clear ideas about its mission: the game should have found a perfect balance over inconsistency, a poem that embodies the literary ideal of the sublime, detaching itself from the “neoclassical” Super Mario 3D World. Odyssey is infinite, mysterious, tainted with danger and littered with pleasant surprises. For this occasion many, many traditional mechanics have been supplanted by new variations. The first completely upset mechanic is that of the power ups, whose formula no longer includes fruits and flowers capable of enhancing the mustache.


Odyssey exaggerates: what would it be like if (almost) everything was itself a power up?

Never seen so many "forms" for Mario

Here comes the Cap-Tura, a maneuver protagonist of the game, which allows you to take possession of enemies, inanimate objects and animals, among which obviously the fearsome T-Rex of Cascade Kingdom stands out (we will resume the topic in the second part). Cappy, our fellow traveling sprite, is able to dematerialize Mario and insert his conscious into various elements of the game, ranging from Goombas to Bill Bullets, from moai statues to taxis, from frogs to the aforementioned prehistoric reptile. The characteristics and abilities of each of them will be usable at will by the player. One rule: the object one takes possession of must not have a hat. The conspiracy theorists are right! Mental manipulation exists, and to avoid it you just need a tinfoil helmet (or a mason's helmet, or even a sombrero…). In fact, any form of headwear will have to be thrown off to allow Cappy to place himself on the victim and perform Cap-Tura. Details on all observed transformations will be in the second part. 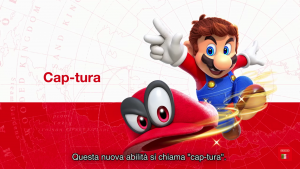 Artwork that portrays the cap-tura. 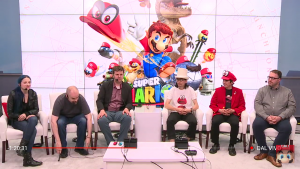 Koizumi, Motokura and Nintendo Treehouse; in the background some of the transformations.

Coins and collectibles: how have they changed?

Odyssey is not afraid of rejuvenating the formula, even at the cost of breaking with tradition

Odyssey is not afraid neither to rejuvenate the old objects scattered around the map, nor to add new ones. For example, coins assume a whole other meaning within the game world. They lose their ability to fill the health meter (a role now covered by the new hearts), and collecting a hundred won't give you an extra life. Lives, which were introduced to Donkey Kong due to its coin-on nature, over the years they have lost their meaning (up to 1110 can be easily collected lately, and a game-over simply resets progress within a stage, resetting the checkpoint flag): here they have finally been excluded from the mix. Dying now involves the loss of ten pennies. This might seem like a paltry penalty, but keep in mind that Odyssey marks the first time in the series in which they are used as a spendable currency. The various kingdoms present the stores of the “Crazy Cap” chain, whose items include hats and clothes, souvenirs with which to decorate the Odyssey and “heart holders” (which expand health from three to six units). Some items can only be purchased with regular coins, while others, exclusive to that kingdom, are accessible with special purple collectibles, one hundred in each level and only spendable inside. Some stores even sell a Luna. Indeed, after the Super Stars and the Keepers Suns, to become the main collectible are the Moons, even if they present significant differences from their predecessors. They act first of all as fuel for the Odyssey, they are in much greater number (as in a real solar system), each kingdom contains a different color and the ways to obtain them are various: using the ability of a possessed enemy, completing bonus stages cleverly hiding, helping an NPC, buying them, beating bosses (in which case you receive a Full Moon, worth three moons), etc. In each of these cases, something strange is noticed: as we would expect, the victory jingle starts and the phrase "you got a moon" appears and the date on which it was collected, after which, however, you are not teleported to the hub. The developers, faced with the large number of Moons present in the game, thought it was appropriate to make the collection experience more organic, and less of the type "go from point A to B, then start again but this time from point A to C" . In this, the game is very reminiscent of the classic N64 Banjo Kazooie. 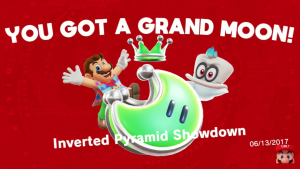 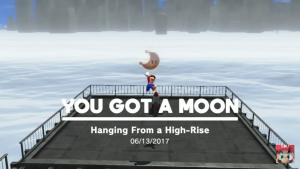 The text that appears when you collect a Power Moon. 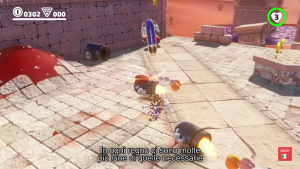 Not all Moons are needed to pass the level.

One final way to receive Moons is by completing special missions, those related to history. Following the latter we will go on with the Odyssey in terms of plot. The place to reach to trigger the cutscene is indicated with a rainbow beam that spreads upwards. Apparently these missions are one with exploration: in the demo, Cappy refers to Bowser's footsteps in the desert sand, and that the direction to follow is that; in the distance there is actually a beam of light, nevertheless Mario deviates from the track and collects a Moon in another way: Cappy does not complain about the change of direction, and the whole is not mechanical as one might expect from such a free approach to the unfolding of a videogame plot.

The last considerations on the Moons concern the quantity: it has already been confirmed that they are very high in number, probably about twenty per kingdom. It was also mentioned during the Treehouse that there is a noticeable gap between the Moons required to complete the adventure and the total Moons, which is sure to make collect-a-thon fans happy.

An avalanche of details and easter eggs!

This last paragraph contains some goodies with which it did not seem appropriate to burden other paragraphs. Furthermore, it contains my personal speculation which obviously must be taken as such. 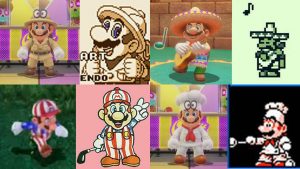 The suits available and the games they come from. 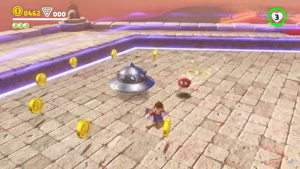 Harriet can hide in the hat!

See you in the second part!

Today we analyzed various elements of what promises to be the next Nintendo masterpiece, but there is still much, much to say. Developer comments, little easter eggs and nostalgia moments, all referring to the immense and colorful game worlds. Each of these (for now) 6 settings has its own particularities that are worth discovering for good.

The second part of this analysis is in progress on the subject, which will be released in the next few days. 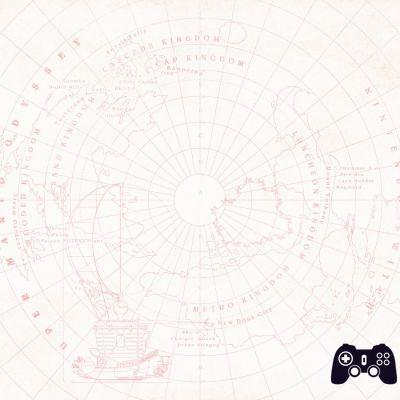 In the next episode of this in-depth study on Super Mario Odyssey we will go through the game worlds seen so far in the two trailers under the microscope.

Do you want to be a video game expert and know all the tricks, guides and reviews for your video games ? Holygamerz.com is a group of video game fanatics who want to inform you about the best tricks, guides and tips. We offer you the best information to be a reference in gaming, so here you can find guides, tricks, secrets and tips so you can enjoy your games to the fullest. Are you ready to get all the achievements of that game that you resist so much? Enter now and enjoy your favorite video game to the fullest!
News Dark Souls: Remastered on Switch postponed to Summer ❯

When He Was Special: Super Mario 3D

Special Randomness and emerging gameplay in Zelda: Breath of the Wild

Breath of the Wild special: the mischief is in the eyes of those who play

Add a comment from Special Super Mario Odyssey under the microscope: History and mechanics