Special E-Third Party: what we expect from cross-platform titles 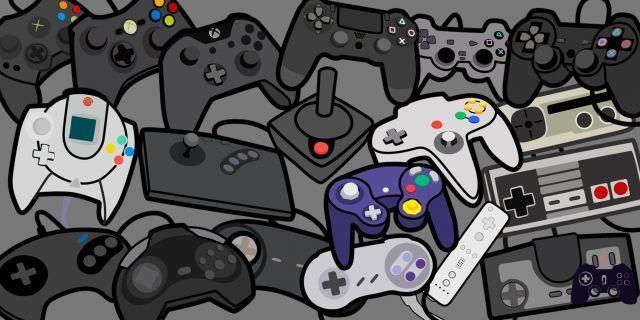 As every year, the staff of Holygamerz will closely follow E3 2017, offering you full coverage of the gaming event of the year. Pending the start of the 2017 edition of the Los Angeles event, we propose a series of specials, in which we will analyze what to expect from this year's conferences, taking stock of the situation based on the various rumors released in recent months:

Out of LA, no mercy

And to stay informed about all the news of E3 2017 do not miss the Practical guide and our full coverage.

As you know, if you have been hanging out in this environment for a while, the videogame market does not live on exclusives and, most of the time, you are faced with titles available on multiple platforms

Also this year has arrived the hottest period for the entire videogame industry. The reason, however, is not to be found in the number of releases (however large), but in the approach of the most important event dedicated to that sector that we love so much and that unites those who write to you with those who are reading this article. After the very interesting specials of my colleagues (you didn't miss them, did you ?!) the time has come to treat a "genre" as loved as it is neglected in favor of exclusive titles for each console: the Third Party. As you know if you have been hanging out in this environment for a while, the videogame market does not live on exclusive rights and, most of the time, you are faced with titles available on multiple platforms. But what do we expect during this E3 ?! Get ready for a journey through the titles that will almost certainly be announced at the Los Angeles kermesse, but we also guarantee you that pinch of guesswork that is so good for our hype bar, more and more charged and ready to explode as we get closer to the start of the conferences. We just have to wish you good reading and invite you to give us your opinion through the site's comments system and / or through our multiple social channels!

EA Games - It's in the Game

To open the games is EA Games, a real war machine as regards the market of multi-platform titles

To open the games is Electronic Arts, a veritable war machine as regards the cross-platform title market. As every year, in fact, we expect to see the usual list of sports titles so dear to fans of the genre. FIFA, NBA, NHL, Madden NFL will likely be shown at the conference on Saturday 10 June, with particular attention, of course, to the first on the list, a real title capable of moving the masses, especially in our homeland. But Electronic Arts does not live on sports alone. The real spearhead, in fact, will probably be that Star Wars Battlefront II which, thanks to the inclusion of the single player campaign, has already been able to conquer even those who have found the first chapter slightly subdued. We hope, of course, we will be shown something regarding the narrative of this promising second episode, but, at the same time, we can't wait to find out if the rewards system for the multiplayer component has been enhanced and made more challenging in the long run. distances. Regarding unexpected announcements, we see possible some more information on the new Need for Speed (although we know that a new Burnout could make us cry out for much more joy) along with something much more defined than Hunt: Showdown, new title in development by Crytek. Furthermore, for all lovers of The Sims, it is possible to announce some new expansion who knows how to draw the attention of the players to that fourth (and often mistreated) chapter of the series.


Don't expect a new The Elder Scrolls, mind you!

The writer, however, continues to hope every day in the announcement of The Evil Within 2

Leaving aside Microsoft (which we will discuss with Sony in a short paragraph later), let us now turn to the Bethesda conference, scheduled for 6.00 on Monday 12 June. As you may have understood from the title: no, a new The Elder Scrolls will not be announced. The times, in fact, are not yet ripe to be able to launch such a bomb and we are sure that, if things go well, it is already a lot if we will see something of that The Elder Scrolls V: Skyrim expected on the Nintendo Switch by the end of the year. Different speech regarding Fallout , which could actually return to the market with an unnumbered chapter as it did for New Vegas, in the hope of conquering all those who are radiation starved after the release of the fourth chapter. On the other hand, whoever writes to you continues to hope every day in the announcement of The Evil Within 2, second episode set in the sick world created by Shinji Mikami, father of another famous horror series: resident evil. The game world conceived by the mad Mikami, in fact, lends itself perfectly to a second chapter, in the hope that he will once again be able to conquer us thanks to his sick and charming design (spans above almost all the competition in this videogame genre), but also that it manages to polish those gameplay imperfections that prevented the first The Evil Within from aiming for the Olympus of videogames. Together with the aforementioned horror title, in our hearts lies the hope of being able to return to exterminate Nazis in a real sequel to Wolfenstein: The New Order, one of the most interesting FPS of this generation of consoles (along with the never enough praised Doom).

Also skipping the PC Gaming Show (where cross-platform titles will be shown anyway), now it's up to a software house that needs no introduction: Ubisoft. Unjustly overlooked by a branch of players who believe it is evil, Ubisoft is ready to amaze everyone at this E3 with more details on many new titles coming. It is almost useless to name the new one Assassin's Creed which, finally, will be shown to the world during the Los Angeles event. Will it be set in Egypt as we have been led to think so far, or will it be something completely new ?! Obviously, we can only have the answer by watching the conference on Monday 12 June (22.00 pm), but our hope is that, whatever the setting of the next chapter, it will be a more innovative product than its predecessors and with a strong focus on the present and on the horizontal plot of the brand. Equally high expectation regarding Far Cry 5, capable even only thanks to the trailer to arouse interest thanks to a charismatic setting and a strong impact, as well as to the themes already in themselves little used elsewhere (everything seems, for now, a sweetened version of Outlast II). With the release date just announced, it's likely we'll see something more on that South Park: Dial-ups, a title that promises to be completely unmissable for fans of the series (and not only). Announced but still never shown is instead The Crew 2, arcade guide title that could make its debut on the screen during the E3 conference and that we hope will improve those defects that made the predecessor a good title, but nothing more. Another personal opinion of the writer (but I bet I'm not alone) is that it would be time to show something new made with the UbiArt Framework, perhaps in the wake of Child of Light and Valiant Hearts, two masterpieces that you will hardly hear of those who say that “Ubisoft always plays the same games”. The new chapter of Just Dance is also expected, which we can't wait to review our increasingly skilled dancer Guido Avitabile.

Announced at the last, Warner also joins the conferences of this already rich E3

Announced at the last, here is that too Warner is added to the conferences of this already rich E3. We will talk about the LEGO titles released (LEGO Worlds) and outgoing (LEGO Marvel Super Heroes 2), but we are confident that Injustice 2 will also receive the right amount of attention, perhaps with the announcement of some new characters for the already large roster. Postponed to October 10, The Lord of the Rings: Shadow of War will certainly be one of the most discussed titles during the event and we are confident that new details will finally be revealed of what promises to be one of the most interesting titles coming out this year. Among the possible twists, however, is the announcement of a new chapter in the Arkham series linked to the character of Batman and / or something made in the same style, but with other DC Comics characters.. I do not deny that the undersigned is a big fan of the characters of the Distinguished Competition, which makes the possible announcement of a new title dedicated to the Dark Knight one of the most interesting reasons to follow the Los Angeles event.

If you can't have total exclusivity, settle for a thunderstorm

Until now we have deliberately avoided talking about the Microsoft and Sony conferences (Nintendo is a separate case), but now the time has come to briefly discuss these two important software houses as well. The reason?! It is very likely that cross-platform titles with content exclusive to PlayStation 4 or Xbox One will be shown during these presentations. Here we expect, therefore, to see gameplay coming directly from the new Call of Duty: WWII, Destiny 2, Red Dead Redemption 2 e Metal Gear Survive, just to name a few. Among the "minor" titles, however, we hope to see something detailed for Call of Chtulu (a must for Lovecraft fans) and for Vampyr, the latest work by the guys from Dontnod Entertainment (Life is Strange). In short: the things to see and discover, as regards the multi-platform titles, will certainly not be lacking even during the events dedicated to Sony and Microsoft!

Obviously, those you have read are not all the titles that will be shown during this E3 and we are sure that the various software houses will still be able to surprise us with some surprise announcements.

The only way to find out, of course, is to follow all the conferences, starting from that of Electronic Arts on Saturday 10 June. Equally obviously we invite you to follow the most important event dedicated to videogames with us, through our social channels and, above all, our Facebook group We Love Videogames. After all, one of the most beautiful aspects of this sector is precisely that of dealing with other people with the same great, boundless passion. See you soon and good E3 everyone!

Do you want to be a video game expert and know all the tricks, guides and reviews for your video games ? Holygamerz.com is a group of video game fanatics who want to inform you about the best tricks, guides and tips. We offer you the best information to be a reference in gaming, so here you can find guides, tricks, secrets and tips so you can enjoy your games to the fullest. Are you ready to get all the achievements of that game that you resist so much? Enter now and enjoy your favorite video game to the fullest!
Mafia II review ❯

Special Narrating emotions in The Legend of Zelda: Breath of the Wild

Add a comment from Special E-Third Party: what we expect from cross-platform titles