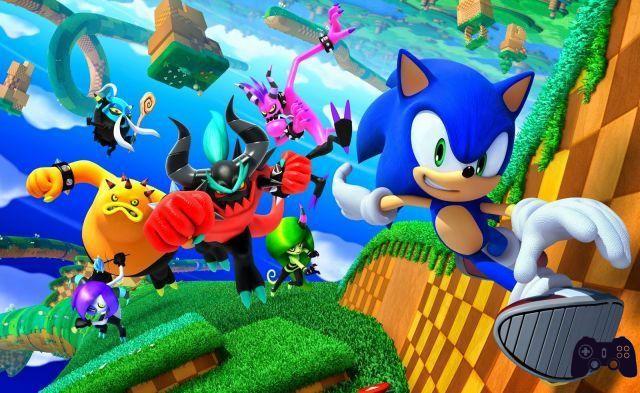 Sonic is perhaps the one among the great protagonists of the 16-bit era who has suffered most from the crisis of the transition to three dimensions, without finding a real identity for years, unlike his famous Nintendo nemesis.
If on the home console the results have been mixed, the portable versions of the blue hedgehog have so far been able to maintain that feeling typical of the original series, also thanks to the choice to keep mainly the two-dimensional setting. With the arrival of Nintendo 3DS however, the computing possibilities offered by the console have allowed us to venture into more technically advanced titles, so much so that with this one Sonic: Lost World, it was decided to develop a game that closely followed the version for Wii U (of which you can read the review here), which from the moment of its presentation as part of a triptych of exclusives made in SEGA, has attracted the curiosity of all Sonic fans.

Sonic: Lost World sees the return of Sonic and his faithful companion Tails, once again grappling with the eternal rival of all time, Dr. Eggman, who despite the bitter defeats by the inseparable duo, continues inexorably his attempt to conquest of the world. During a long chase, however, Sonic's plane crashes on a mysterious continent, known as theLost Esamondo. And this is where Sonic's new adventure begins, once again with the aim of stopping the advance of Eggman and his new army, the six Nefarious, powerful creatures under his control. The porcupine's intervention, however, will prove more hasty than necessary, and once freed from Eggman's power they will reveal their evil nature, forcing Sonic and the archenemy of all time to work together to restore peace in the Hexamond. This version for Nintendo 3DS was born as a parallel version to that designed for Wii U, proposing common themes and elements of the plot but with an alternative level development, while maintaining different points of contact with the older sister.
Among all the nature of the levels, the first big novelty of this chapter of Sonic that abandons the linearity of the long paths to be faced at full speed to open up to a structure made up of long pipelines, on which the entire levels are developed, offering the player platform sections and wider areas for solving simple environmental puzzles.
This new game formula considerably slows down a gameplay that has always been based on the principle of running, where the player must choose at the right time the point where to make the jump and take one of the proposed crossroads. Basically this structure has remained, but with a 360-degree development on the axis of the path, while the player is offered more freedom in choosing the path to take, encouraging him to search for every passage or secret hidden within the level. The more relaxed platform sections instead offer a structure based on the verticalization of the environments, with a Sonic forced to jumps and acrobatics worthy of the best parkur athlete, between walljump and running on the wall easily defying the force of gravity. The 2D side-scrolling levels are unmissable, decidedly more classic (despite some news also linked to the sudden rotation of the stages) and which will remind us how dear Sonic can run fast.

Inspiration or lack of ideas?

From time to time the levels also leave room for some simple puzzles to be solved in order to continue the adventure, some of which recall a gameplay almost forcefully torn from the past by another Sega title, the never too praised Billy Hatcher, where Sonic will have to roll when a snowball when a fruit towards certain goals, so as to open up new paths. There will also be the famous bonus levels, in which it will be possible to obtain one of the seven emeralds of Chaos, after a careful collection of a certain number of special orbs within the time limit. In these stages the motion sensors of the console will come into play, which will allow us to control Sonic at 360 ° simply by moving the console in the desired direction. Some situations will even wink at Mario Galaxy, with levels reminiscent of the planets visited by the mustachioed plumber, even proposing a boss fight that closely resembles the one with the Dino Piranha present in the first chapter of Galaxy.
Sonic: Lost World sees the return of the power of colors, already at the heart of the mechanics of Sonic Colors, which in the timeline of the various chapters of Sonic places him as an almost direct sequel. It will be enough to find within the levels one of the six Wisp, which activated through the use of the touch screen, will unleash their power allowing Sonic to use special abilities that will transform him, for example, into a powerful drill capable of moving easily underwater or create passages in the ground or even become an asteroid capable of sucking all the enemies and obstacles in front of it inside.

If the development of the title for Wii U is entrusted to the Sonic Team, this reduced version is again the work of Dimps, who had already dealt with the previous portable versions of Sonic. In the development phase, however, something seems to have gone wrong and all the good ideas behind the game (and the Wii U version) here take on a confused and forced aspect. The impression one gets by facing the various levels in succession is that the desire to insert different elements in the gameplay has negatively affected the quality, making it all lackluster and not very thorough.
A striking example is precisely the powers of the Wisp, which add nothing to the gameplay level, becoming completely irrelevant to the action in some sections. The game action is also affected, which due to the obvious technical limitations of the console fails to replicate the good work done on Wii U in terms of level design, which here appears flat and banal. The platform sections are of little use, which due to a badly designed virtual camera and which prevents you from perceiving the right distances, are difficult even in the simplest of jumps. This is also due to the not exactly clean control system, which does not guarantee the millimeter precision that the game often requires during the 3D phases. Also annoying is the system linked to the lock-on of the enemies that will activate when we are close enough to be able to hit with an air attack or a paralyzing attack. So far nothing different from the usual; the problem occurs when there are several enemies on the screen, creating confusion as to which enemy to hit. In these cases, in a completely automated way, the game will decide who to eliminate, with often unconvincing results, which will cause sudden falls on deaf ears or sensational forced turnarounds.
Even the rotation of the levels, which in itself is well integrated into the game system, in the long run shows some limits always due to the camera, which to hide conspicuous popup problems in the elements that make up the level, limits the vision of the horizon, reducing thus the part of the path that can be viewed and causing sudden deaths or impacts against obstacles that in other situations would have been avoidable. Not even the infamous boss fights are able to keep up the pace of the game, with fights that can be resolved in a few moments and not at all stimulating.

The game beyond adventure

Once the adventure is completed, which can be completed within a few hours, it will be possible to replay the various levels, trying to improve the score obtained or by collecting the various Red Rings well hidden within the various levels. Speed ​​run lovers, on the other hand, will be able to enjoy a mode Time Attack, in which it will be possible to create your own records and publish them online to boast of the results obtained. Sonic Lost World also offers a versus mode both locally and online, which allows multiple players to compete in speed races or in last-tier battles. Useful, albeit limited to some levels, the download mode that allows a second player to take part in the challenge without owning a copy of the game, by downloading a portion of the software useful for the game into his console. In this version for Nintendo 3DS we also find the'Tails workshop, a section in which to create radio-controlled models using some objects collected by completing the levels and which will provide support to Sonic in case of difficulty, giving him some powers such as invincibility, eliminating adjacent enemies for him or, in case of repeated deaths, providing him with lives additional. This feature suffers from the same problems related to the powers of colors, as it will hardly feel the need to go and activate even one of the built models, due to a level of challenge set downwards that makes the player desist from using it. These models can also be sent to the Wii U version and used in the home version by a second player during co-op matches.

The technique of speed

The first impact with Sonic: Lost World is good. Technically we are dealing with a colorful title, quite rich in outline elements and structurally solid; in short, an honest graphics sector for the console on which it runs. As we get deeper into the game, the flaws will show up one by one. In addition to the aforementioned camera, which serves to mask the popup that afflicts the title in certain situations, the engine often shows its limits, causing the frame rate to collapse especially in overcrowded situations or if you decide to activate stereoscopic 3D. On the other hand, the compression of the videos that intersperse the game between one level and another is disastrous, which in order to be inserted into the game cartridge have undergone a work of quality filing, graining the image of the CGI movies to make them annoying to see.
On the other hand, the audio part is pleasant, with numerous songs that arrange the themes of Sonic, which are accompanied by new tracks full of rhythm and which do their accompanying work well. In the 3DS version of this new chapter, the possibility of choosing the original voice acting of Sonic is lost.

Verdict 6.5 / 10 Is it the portable Mario Galaxy rip off? Comment Unfortunately Sonic: Lost World in this version for 3DS is not fully convincing. Sonic's run is stopped by the numerous elements inserted, which instead of making both the gameplay and the game situations varied, appear thrown away and not very detailed. Even the care taken in the control system and in the use of the camera need a revision, bringing with it problems now known to three-dimensional Sonics and which would require a structural rethink. Last but not least, we report a graphic rendering undermined by some uncertainties due to the technical limitations of the console. A title for diehard blue porcupine lovers who can't do without their mascot even outside the home. In the situation of choice, the advice we can give you is to focus on the Nintendo Wii U version, much more satisfying and well packaged. Pros and cons ✓ Suitable for hit and run matches
✓ Distortion of classic Sonic mechanics
✓ Convincing technical implementation ... x ... although not without several defects
x Controls to be reviewed
x Numerous underdeveloped ideas