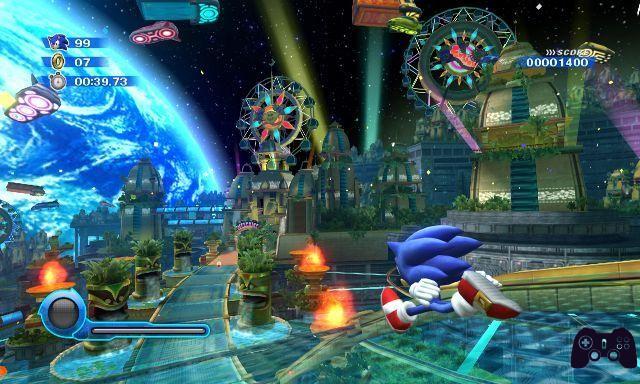 It is undeniable that for some years now the Sonic 3D titles have been constant disappointments. The terrible Sonic the Hedgehog; Sonic & The Secret Rings, which showed good ideas sunk by an unmanageable control system; Unleashed, which turned out to be only half a good game; finally Sonic & The Black Knight, born from a bad game design and plagued by a non-existent longevity. So, in the same year of the launch of the episode Sonic 4, Sega tries again with this Sonic Colors, built trying to listen to the criticisms reached to the old chapters, and with a certain attention towards the latest successes of the arch-rival Mario.

One of the main criticisms leveled at the last 3D chapters of Sonic had been that of introducing too many characters, playable and not, often looking stupid and childish. With Colors we return to the basics: Sonic is the only playable character, accompanied only by his long-time friend Tails, who we will not check but who will appear in the various videos. Even in the plot, the excessively epicizing and often too exaggerated stories of the past chapters have been cleaned up. This time Sonic and Tails will find themselves in a gigantic Luna Park built by Eggman. The treacherous doctor claims to have repented of his misdeeds and wants to be forgiven by creating a place where anyone can have fun. Things, as intuited by the blue hedgehog, will not be exactly like this, and our task will be to unmask yet another evil plan. The model on which the gameplay of Colors was built is similar to that of the daytime levels of Unleashed: an alternation of 3D phases in which Sonic whizzes quickly through a more or less forced path, facing enemies and obstacles, and phases in which the action moves in 2D, with levels similar to those of the last chapters for DS. Here, in fact, the design becomes more intricate, showing as many ways as possible to get to the end of the level, secret objects to search for, and numerous power-ups. Taking a cue from the latest Super Mario titles, Colors presents in its 2D sections, various power-ups that will give the blue hedgehog new abilities from time to time, also changing its appearance. In most cases the levels can be completed even without using these power-ups, but unlocking them will open up many new possibilities and ways to get to the bottom of the stage. Although the basic concept is good, as well as the cue of the power-ups, several flaws prevent Colors from taking off. First of all, there is a distinct imbalance of levels in 2D (about 70% of the game), compared to those in 3D. And the design of the latter seems particularly uninspired. Sonic is often forced to travel a fixed path, in which the enemies do not offer particular resistance, and if it were not for the hated sudden chasms you could even fall asleep in these sections. Also the sense of speed is good, but Sonic responds in a slow and woody way to commands. Better is the situation of the 2D levels. The idea of ​​power-ups works well, but it is noted that the game engine is not optimized for 2D platforming. Sonic's jumps have strange physics, unpredictable and the cause of many deaths and curses. Unconvincing is also the idea of ​​having to look for certain objects during the levels: it is not clear whether the Sonic team wants to accept this aspect or that of speed, and what results is a jumble of 2 different concepts, which little satisfies the player.

From a graphic point of view Sonic Colors is solid, without excelling. The heights of Mario Galaxy are obviously not reached, but it is clear the inspiration they provided for the themes of the various worlds of Colors, pleasantly colored and particular. However, it is noted that a version of the engine of the Wii version of Sonic Unleashed was used for the game, a difficult choice to understand because Secret Rings and Black Knight, which used another engine, had certainly more detailed and fluid graphics than both Unleashed and the title in question. There is also a certain rush in development, the first levels look great, while in the final ones, here and there you can see faded and lower quality textures. Even in the music the reference point remains Mario Galaxy, with orchestral music very similar to that of the Nintendo masterpiece and a main theme bordering on plagiarism, while the dubbing choices are good: the classic English voice actors have been replaced by new ones with less voices. annoying. For purists there is also the option to switch to Japanese speech. The duration of the game stands at 10 hours, certainly a huge step forward compared to only 4 of Black Knight, but it is always too short a game, especially when compared with the Nintendo platformers, or even only with the Sonics of a few years. does. There is not even a great stimulus to replay value, except for the fanatical completists.

Verdict 6.5 / 10 Good ideas, but there is still something to do Comment Sonic Colors, albeit placing a couple of inches above Unleashed and Black Knight, cannot recover from the halo of mediocrity that has enveloped the saga for some years now. It is clear that the Sonic team does not know which way, which direction to follow in the development of the new Sonic and simply "try them all". In Colors there are many interesting ideas, but poorly developed, with some haste, and in a chaotic way. For these reasons, I can only recommend Colors to passionate fans of the blue hedgehog, directing anyone else who is interested in a platform, whether 2d or 3d, towards the latest Nintendo products. Anyone who wanted a Sonic at all costs would do better to recover The Secret Rings, which albeit with its control problems, remains the best of this generation, or go directly to the titles of the previous generation. Pros and cons ✓ Finally Sonic without various amenities
✓ Good idea of ​​power ups
✓ Solid and colorful graphics x Direction of the game confusing
x Too many 2D levels than 3D ones
x Graphically inferior to its predecessor, why?
x Limited longevity

Do you want to be a video game expert and know all the tricks, guides and reviews for your video games ? Holygamerz.com is a group of video game fanatics who want to inform you about the best tricks, guides and tips. We offer you the best information to be a reference in gaming, so here you can find guides, tricks, secrets and tips so you can enjoy your games to the fullest. Are you ready to get all the achievements of that game that you resist so much? Enter now and enjoy your favorite video game to the fullest!
Ratchet & Clank Review (2016) ❯

I Am Setsuna Review