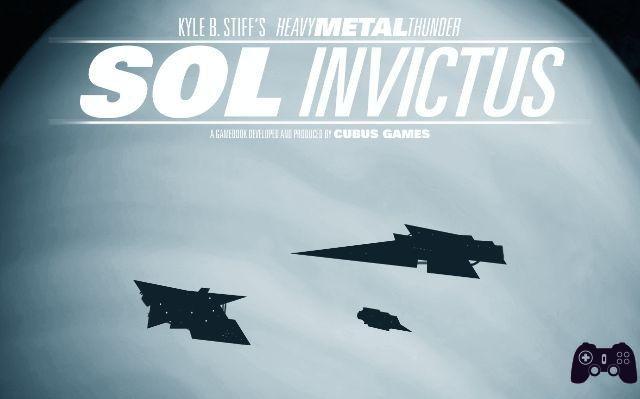 In recent years, the prospects of mobile gaming have paved the way for a whole series of new gaming experiences that often put a strain on our own personal definitions of gaming. This is the case, for example, of the so-called Gamebook, which in the transposition from printed paper to a touch screen have often gained in interactivity and immersion. Masters in this case were the English developers of Inkle, who with the series of Sorcery! and the extraordinary 80 Days they have created real benchmarks in terms of interactivity and narrative approach. To take up the challenge is the Spanish team, Catalan to be precise, of Cubus Games, which offers us on iOS and Android platforms Sol Invictus, adaptation of the sci-fi novel of the same name by Kyle B. Stiffs. How did they get away with it? Let's find out together.

Sol Invictus it is actually the second episode of a much larger saga, which began with the previous one Heavy Metal Thunder (also adapted in the game book by Cubus Games) and with at least seven other releases planned. Anyone who has not read / played the previous episode can still throw themselves into Sol Invictus without delay thanks to a introduction that quickly summarizes the setting of the story. We are in the future. Humanity has finally left its mother planet, Earth, and has begun to colonize every corner of the solar system, from Mars to Pluto, passing through countless colonies and space stations. In the meantime, the social structure has increasingly degenerated: the human race is increasingly corrupt and devoted to savage and senseless consumerism, governments are puppets in the hands of corporations, the rich are getting richer and the poor poorer. However, it will be the sudden and unstoppable attack of one alien race to bring humanity to its knees once and for all. Militarists and ruthless, the invaders, a humanoid race with disturbing goat horns and a technology far superior to ours, will quickly take control of the earth, erasing all traces of human civilization as we had known it. The only hope of the human race is there Black Lance Legion, a resistance group that, having taken possession of an enemy vessel, has managed to make the invaders' technology their own and that in the last 3 years has gathered fighters from every corner of the solar system. Among these, the so-called "Human Fanatics“, A group of extremists willing to face any sacrifice for the good of the human race and the defeat of the invaders. They are strong and brutal, with suggestive pagan battle names, are described as true space Vikings and despise the weakness, cowardice and corruption of "old humans" almost as much as the invading alien. Cromulus, the protagonist of Sol Invictus, is just one of these self-defined "Fanatics". Awakened missing and amnesic during a battle in the last episode, Cromulus is finally reunited with his unit aboard Penelope's Vengeance at the beginning of this second new book, which will narrate his exploits during the military operation that gives its name to the episode, with which the human guerrilla hopes to change the conflict that has so far seen it as a loser.

The plot of Sol Invictus is rather self-contained and compact. It is clear that the story was written right from the start with an episodic subdivision in mind, and Sol Invictus very little progresses with respect to the overall plot of the saga. The author's prose, strictly in Englishrather, it focuses on vivid depictions of confrontations and battles. From this point of view, Kyle B. Stiffs shows a fair amount talent in describing chaos and dynamism of these situations, enriching them with a fair number of pulpy and gory details. There are other parts where Sol Invictus definitely shows its side, such as thenaivety of some dialogues and some embarrassing slips, like when you try to justify the ridiculous nickname of one of the supporting actors, “Wolf Tits”, by bringing up the legend of the Roman she-wolf. The excessive reliance on references and citations to the world and to the aesthetics of Metal music is also not very welcome. As much as the author may have loved that cultural background (and it is noticeable), thinking that in the twenty-second century every single human survivor of an alien invasion is a metalhead or who in any case is familiar with metal culture sounds ridiculous and takes away credibility from the story. . Finally, do not like the ill-concealed sociological / ideological intent of the author in showing an evolution of our society as deeply corrupt, wrong, weak and mean and in taking a group of extremist fanatics as a moral example; to give credit and value only to warriors, to the "pure and strong", and at the same time to indicate anyone else as a sort of subhuman, the sum of all that is wrong in society. A militarist, macho and squadron vision, which stinks of fascist and which is honestly unpleasant.

So far there has been a lot of talk about the plot but very little about gameplay. The main reason is that Sol Invictus, for being a game book, is much book and very little game. Unlike Inkle's works, which have literally distorted the structure of the source materials by creating highly interactive experiences and proponents of original storytelling methodologies, Cubus Games has carried out very little adaptation work. The result is almost that of being faced with a ebook in the packaging of an app. The proverbial multiple choices will in fact be few and far between, distributed later pages and pages of narration, very long wall of text interrupted only by sporadic illustrations. The importance of these choices in the development of the plot will also be minimal and everything will give the impression of being completely out of the player's control and traveling on well-established tracks. There is a system of character statistics and an inventory, but the very few times these systems will be brought into play will be during the fights, 5 or 6 in all during the adventure, explained with the dice rolls. In fact, the game does a terrible job of explaining how statistics affect the results of the shots, and everything feels completely random. The biggest problem is perhaps the management of the bailouts via checkpoint. These are rare and distributed in a completely uneven and poorly studied way. For example, when your character dies, you have the option to rewind the story to the last checkpoint. A typical problem, however, is when the choice point that led to our death is located before the last checkpoint. This is a far from rare occurrence, which forces the player to try to load the game from the right checkpoint, going back and forth between the various walls of text.

At least the eye wants its part

Fortunately, a positive point to report is the artwork of the title. In fact, we cannot speak of graphics as a whole, since the only graphic elements present in addition to the menu interface are in fact the splendid artworks that from time to time interrupt the endless stream of words. These are illustrations made by the Spanish artist Marc González, characterized by a great charisma and unique style. They help create a gloomy, oppressive and desperate atmosphere, while the most memorable scenes are rendered with the contrast between bright colors and the black of the sidereal spaces or the iron of the spaceships. The sound sector, on the other hand, is without infamy and without praise, made up of a handful of loops of ambient compositions that accompany the reading in every moment. These are generic and completely forgettable songs, which fortunately manage not to irritate the player even after yet another loop. The duration of the adventure is directly proportional to one's reading speed and confidence in the English language. A fast, fluent reader can even get to the bottom of Sol Invictus in just an afternoon, while the few ramifications of the story and the few options in choice points will actually discourage later replays.

Verdict No Much book and little game Comment The failure of Sol Invictus is a burning failure. It burns because being on those platforms where the same genre had pushed itself beyond all limits, it seems even more like a lazy and unimaginative effort. The problems of Sol Invictus are many, starting from the many questionable elements of the plot, up to inexcusable technical errors such as the bad distribution of checkpoints and not knowing how to explain to the player the influence of statistics on dice rolls. The biggest problem, however, is the laziness of the developers' approach. Where others have tried and reinvented a genre and a way of narrating a genre, Cubus Games has limited itself to slapping a series of walls of text inside an app, occasionally interspersing them with some illustration, multiple choice or roll of the dice. That's enough. We are at such a level that the very definition of Sol Invictus as a game is questionable. Having said that, it is then clear that a couple of well-chosen elements are not enough (the quality of the artwork, the engaging narration during the battle phases) to save the shack. Pros and cons ✓ Descriptions of engaging encounters and battles
✓ Excellent artwork x Only in English
x Fluctuating writing quality
x More a real book than a game book
x Problems with checkpoints
x Lazy design, impervious to novelty

Do you want to be a video game expert and know all the tricks, guides and reviews for your video games ? Holygamerz.com is a group of video game fanatics who want to inform you about the best tricks, guides and tips. We offer you the best information to be a reference in gaming, so here you can find guides, tricks, secrets and tips so you can enjoy your games to the fullest. Are you ready to get all the achievements of that game that you resist so much? Enter now and enjoy your favorite video game to the fullest!
Final Fantasy XV: Episode Duscae preview ❯