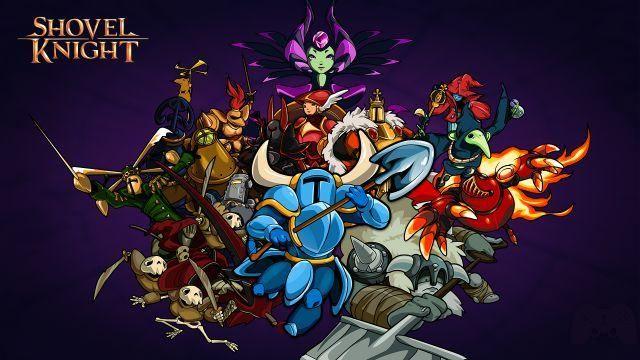 It took more than 4 months of waiting compared to the US release but finally Shovel Knight, the two-dimensional action platform inspired by the old glories of the past arrives in Europe on Nintendo Wii U e Nintendo 3DS. Let's find out the new title of Yatch Club Games.

Love in the time of pixels

Inspired, but not "old" in style, Shovel Knight is a modern platformer

The tendency to be inspired by the great classics of the 8 and 16-bit era has now become a custom, especially in the indie scene. You want the simplicity of replicating proven and abused situations and gameplay, you want the nostalgia factor, an easy foothold for those players who always remember with pleasure the times gone by. Among all the strongly retro-flavored titles that we have had the opportunity to try in recent years, Shovel Knight has captured us immediately, since its first appearance on Kickstarter, where in a short time it has collected and exceeded the goal set, enjoying considerable success. Deserved, we would add, given the excellent quality of this 2D platformer that pays homage to the genre, bringing up sacred monsters such as DuckTales, Mega Man or Super Mario Bros. 3.
Inspired, yes, but not "old" in style. Shovel Knight is a modern platformer that Wisely “steals” gameplay elements from the aforementioned games by modernizing their mechanics. A pleasant title to play, with platforming dynamics that touch perfection and a decidedly above average level of challenge. Difficult, but never impossible, able to entice the player to continue, mistake after mistake, without ever exceeding frustration.
Even in history, the game refers to the greats of the past. Shovel Knight, our protagonist armed with a shovel, and his inseparable companion Shield Knight while exploring the Tower of Destiny they released a terrible curse locked inside an amulet. This led to the disappearance of Shield Knight, causing the poor Shovel Knight to suffer endless pain that led him to a life of loneliness. With no one to protect the kingdom, it was invaded by the evil one Enchantress and his band of henchmen. On the verge of destruction, our shovel-wielding hero decides to return to action to save the kingdom and find out more about the disappearance of his beloved. Beyond the decidedly dark but quite exploited themes of the plot, we find a pleasant story to live, seasoned with humor and irony, sui generis characters and a lot of genuineness.

Shovel Knight's control is close to perfection, allowing us to calibrate jumps with pinpoint precision

Structurally, the game is divided into levels, which can be selected from a map that closely resembles that of Super Mario Bros. 3. Each level will be divided into patterns to be completed, each of which will propose a step to be completed to move on to the next. More or less demanding challenges ranging from killing all the enemies present to doing a series of jumps. The complexity of the levels is varied, and within the same world we will find ourselves dealing with multiple situations that are always different.
As mentioned, Shovel Knight's control is close to perfection, allowing us to calibrate the jumps with millimeter precision. Our hero can rely on his trusty shovel, to unearth treasures, attack enemies or use it to perform the "pogo jump", which in a completely similar way to what happened in DuckTales, allows you to jump over enemies or some elements of the seabed using them as springboards.
In addition to the multifunctional shovel, it is possible to collect and equip some relics that give the protagonist some special abilities, consuming a certain amount of magic points. Thanks to the relics you will get some tactical advantages such as aerial leaps, wands spitting fireballs or objects that will make us invincible for a few secondsThere will also be a village, inside which there are some fundamental figures, such as the blacksmith and the gunsmith where it is possible to buy new and luxurious armor and new attachments for the shovel. But also the gastronome and the sorceress will prove to be key characters to increase respectively the maximum health and the magic points, collecting special collectibles scattered throughout the levels. Levels that hide within them the most varied treasures that can be spent to improve our knight. The metroidvania skeleton then pushes us to retrace the various areas to discover all the carefully hidden secrets, once our character is maximized, which will become capable of overcoming previously precluded passages.

Death in Shovel Knight is a delicate matter

Death in Shovel Knight is a delicate matter. When we fall in battle, we will be able to start over from the last check-point reached, but losing a part of the collected treasures. the same way it happens in Dark Souls. At this point we will have the opportunity to recover it by reaching the point where we failed while if we die again, the loot previously lost will dissolve. From this point of view, dying in Shovel Knight appears to be the lightest aspect of the game. People die a lot, it is true, but there is the possibility of counting on infinite lives and on numerous check-points, in some situations you lose a little that sense of challenge present in the game.
The end-of-level boss battles are memorable. Each enemy will enjoy a unique move set, forcing us to learn the attack patterns, taking advantage of the most opportune moments to unleash our blows. These phases will be particularly challenging and will force us to study the enemy thoroughly to avoid ending up in game over prematurely.
Once you have reached the end credits, you will be able to continue your game, trying to complete the game 100% or dedicate yourself to the New Game +, which will raise the level of the challenge and add new content to the game, with the possibility of starting the game with all upgrades previously unlocked. Completing Shovel Knight will be challenging but not impossible, and it will take a while around 5/6 hours based on the player's ability. To encourage replayability we find some internal objectives, some decidedly tough to complete.


The Wii U version of Shovel Knight boasts the ability to leave messages via Miiverse within the game in the style of Dark Souls, with advice and commentary on the game, support for various controllers, theOff-TV Play via Gamepad. On the other hand, the 3DS boasts stereoscopic 3D, a minigame based on the S.treetPass named StreetPass Battle Arena and the ability to use console coins to convert into gold to spend in the game. Both versions use the second screen for the interactive menu in real time.

Riot of pixel art for a graphic style inspired by the great classics of the 8-bit era. This choice made programmers indulge themselves in creating gimmicks to make the most of this aspect, focusing particularly on animations of Shovel Knight and enemies. Excellent artistic direction and, above all, impeccable painstaking work done on the level design side, capable of creating splendid levels from the point of view of composition.
Even on the sound we can only congratulate and rejoice to find Jake Kaufman, aka Virt, historical composer mostly active lately in the independent scene, who packs a soundtrack (downloadable from BandCamp) that goes perfectly with the atmosphere of the game, in a concentrated chiptunes that is really pleasant to listen to.
In Shovel Knight we have adaptation in Spanish, complicit in the delay of this European edition. Certainly a plus for some, but that absolutely does not justify all the time required for translation, given the few lines of text present. Among other things, the generally good translation also has some errors. Not serious, but they still make you turn up your nose.

Verdict 8.5 / 10 Ah but so is Dark Souls 8-bit? Comment Congratulations to Yatch Club Games. This is what we would like to say to this "young" studio that has been able to create a title certainly addressed to a nostalgic user but at the same time a modern and pleasant platform experience to play. Not without some flaws, above all a level of difficulty set on values ​​above average that clashes with a system of checkpoints and infinite lives that does not go well with the style of the game, but at the same time saves it from the frustration that other titles do not they manage to avoid. Despite this small uncertainty, Shovel Knight proves to be one of the most interesting indie titles of this 2014 and one of the best 2D platformers around. To be tried at any cost. Pros and cons ✓ Platforming close to perfection
✓ Retro style spot on
✓ Several secrets and New Game +
✓ Virt to the OST. Need anything else? x Check-point and infinite lives lower the level of challenge
x Some mistakes in the translation
Do you want to be a video game expert and know all the tricks, guides and reviews for your video games ? Holygamerz.com is a group of video game fanatics who want to inform you about the best tricks, guides and tips. We offer you the best information to be a reference in gaming, so here you can find guides, tricks, secrets and tips so you can enjoy your games to the fullest. Are you ready to get all the achievements of that game that you resist so much? Enter now and enjoy your favorite video game to the fullest!
LEGO City Undercover: The Chase Begins review ❯

Langrisser I & II, back to the beginning | Review

Tales from the Borderlands: Episode 5 - The Vault of the Traveler review