Should you use HDMI, DisplayPort, or USB-C with a 4K monitor? 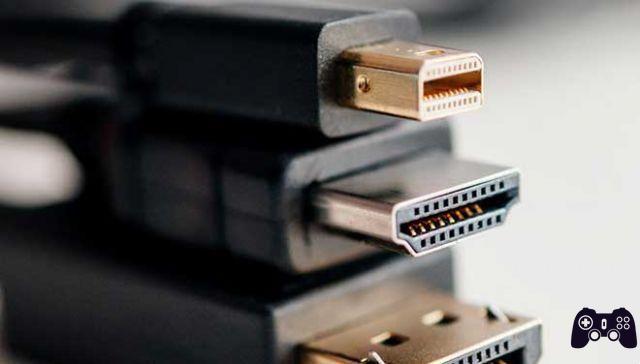 If you bought a new 4K monitor recently, you may have been puzzled by the array of ports on the back. HDMI, DisplayPort, USB-C, and Thunderbolt are all on the agenda now, but which one is best and why?

High Definition Multimedia Interface, or HDMI, is the most common display interface today. It is used in televisions to connect game consoles and Blu-ray players. It provides a stable digital signal that can be hot swapped (unplugged and plugged in without turning off devices) at will.

HDMI 2.1 is the latest standard adopted by device manufacturers, supporting 48Gbps throughput. This is enough to handle a 10K 60 frames per second 10-bit color display. Since we're talking about 4K displays, HDMI 2.1 is more than adequate.

Cascading (connecting a computer to a monitor and then connecting that monitor to another monitor) is possible with HDMI 2.1. Monitors that support it are quite rare, however, and you can sequentially link two displays at the same time.


Learn more: How to connect two monitors to Windows 10

HDMI 2.1 has a few tricks up its sleeve, including limited power delivery (uncommon) and the ability to act like an Ethernet adapter (with the right cable). It can also use FreeSync (or VESA AdaptiveSync) to eliminate screen tearing.

HDMI cables are cheap, but keep in mind that you'll need to upgrade them to be 2.1 compliant if you want to take full advantage of the feature set.


While HDMI 2.1 is very capable, be warned - it's possible that your 4K monitor only supports the older HDMI 2.0 standard. This means that it is limited to outputting a 4K signal at 60 frames per second in 8-bit color. You'll also be limited to 44,1kHz and 16-bit pass-through audio with only two uncompressed audio channels (5.1 audio channels are compressed).

For gamers, HDMI 2.0 does not support the FreeSync standard. HDR content is limited to static metadata (the HDR 10 standard) versus 2.1, which supports dynamic metadata (including HDR10 + and Dolby Vision). These old HDMI 2.0 4K monitors will save you some money, but you will also lose some features.

If you're rocking a 4K monitor with HDMI 2.1, severe bottlenecks are unlikely to occur at this stage. If your monitor only supports HDMI 2.0, DisplayPort may offer a better experience in terms of overall functionality, especially if you want to cascade more than two displays.

DisplayPort has long been the choice of PC enthusiasts, and on paper, it's not hard to see why. While HDMI 2.1 surpasses 48Gbps, the upcoming DisplayPort 2.0 standard can handle 80Gbps throughput. It's worth noting, however, that DisplayPort 2.0 devices won't hit the market until late 2020.

This means that most people will continue to use the DisplayPort 1.4 standard, which still piles up favorably over HDMI 2.0.

DisplayPort 1.4 can handle 8KB resolution at 60 frames with true 10-bit color, but only with display stream compression. Uncompressed performance is the same as HDMI 2.0, at 4K / 60/8-bit. Up to two displays can be cascaded at 4K resolution, as long as the monitors support it.

There are no limits to audio pass-through like there are with HDMI 2.0. DisplayPort 1.4 can support up to 192kHz and 24-bit audio with uncompressed 7.1 audio channels. You'll also get FreeSync support as DisplayPort was previously a requirement for this before the arrival of HDMI 2.1.

DisplayPort 1.4a also supports dynamic metadata for HDR content, which means Dolby Vision and HDR10 + support greater brightness and color gamut. Your monitor's capabilities will be the limiting factor here, not DisplayPort.

Unlike HDMI, DisplayPort doesn't have any kind of Ethernet support. This is mainly due to the fact that DisplayPort is primarily used for computer-to-monitor connections. HDMI, on the other hand, has broader applications, including connecting AV receivers, TVs, and other consumer electronic devices.

DisplayPort offers some good advantages over HDMI 2.0, but they mainly apply if you want to cascade multiple monitors. In the future, with the arrival of DisplayPort 2.1, 4K at frame rates above 60 frames with true 10-bit color will be possible, but only on a monitor that supports it.

USB-C has a wide range of uses. The ability to carry a display signal over USB-C relies on a technology called USB-C Alt Mode. Essentially, this is DisplayPort only via a USB-C socket. The throughput and supported resolutions depend on the DisplayPort standard you are using (at this stage, it's probably 1.4).

This means that all technical aspects of DisplayPort USB-C over Alt Mode mirror those of regular DisplayPort 1.4. With the compression of the display stream, it is theoretically possible to obtain a 4K signal at 60 frames with 8-bit color at resolutions of 8K at 10-bit.

One of the main reasons for choosing USB-C is ease of use - USB-C ports are found on all modern laptops. However, you'll need to make sure your laptop supports USB-C Alt mode display output. This will likely be included in the technical specifications or on the manufacturer's website.

The USB-C Alt mode display output should also provide support for USB Power Delivery (USB-PD). If your laptop supports USB-PD (and many do), you can charge your laptop and send it to a monitor with a single cable.

You'll need to do your research first to make sure your monitor is providing the right output power for your laptop. For example, the Dell UltraSharp U3219Q offers USB-C connectivity, with 90W of USB-PD. That's more than enough to charge a MacBook Air or Dell XPS 13 laptop. However, it's slightly less than the 96W “required” of a 16-inch MacBook Pro (although the machine rarely draws that much power).

USB-C is a great choice if your laptop is compatible with it, particularly if you travel around the home or workplace a lot. USB-PD means you won't have to carry a charger with you to connect it to a monitor. You'll also get all the benefits of DisplayPort 1.4, which is still a highly capable standard.

However, there is some contention as to whether multiple 4K monitors can be cascaded over USB-C. If this matters to you, it's best to go with DisplayPort or opt for a Thunderbolt 3 monitor.

Thunderbolt: Great for Daisy-Chaining and Mac

On a 16 2022-inch MacBook Pro, two Thunderbolt cables can drive four cascaded 4K displays or two 5K displays. Apple has been a strong advocate of the technology since its first release, which is why Thunderbolt may be an ideal choice for Mac owners.

Thunderbolt 3 not only allows you to cascade other displays, but also other devices, such as external storage arrays, docks, or even external GPU enclosures.

You will need to purchase a Thunderbolt 3 compatible monitor if you want to use Thunderbolt 3 to connect your display. These generally cost more than regular HDMI or DisplayPort 4K monitors. The Thunderbolt 3 cables needed to drive them aren't cheap.

Keep Thunderbolt in mind when upgrading if it's not an option for you right now. Thunderbolt high-speed storage is worth the investment, plus it cuts down on cables.

If you already have the option, Thunderbolt is definitely worth it, especially if you want to cascade multiple 4K monitors.

It's probably not worth shelling out the money for an expensive Thunderbolt 3 cable if you're only using one monitor, as it wouldn't offer any huge benefits.

So what's the right thing for you?

Which option you should choose ultimately depends on what you hope to achieve and what technologies are available. At the time of writing, HDMI 2.1 is already on the market. It provides maximum productivity in terms of maximum resolution, frame rate and color depth and is a solid choice.

DisplayPort 1.4 is still preferable to HDMI 2.0 due to its superior throughput and chaining capabilities. However, if you don't run multiple monitors, the two are paired fairly evenly.

USB-C ultimately depends on whether the laptop supports USB-C Alt mode with DisplayPort and that the monitor provides enough power to charge the laptop. If your laptop has both of these features, USB-C is an affordable choice.

Thunderbolt 3 is the fastest connection with the highest data throughput. For chaining two 4K monitors or connecting a 5K display, it's practically unbeatable. You can connect other devices too, which is neat. However, you will need support on both the monitor and computer sides and an expensive cable or two.

Two words about the security of computers connected to the network ❯

add a comment of Should you use HDMI, DisplayPort, or USB-C with a 4K monitor?