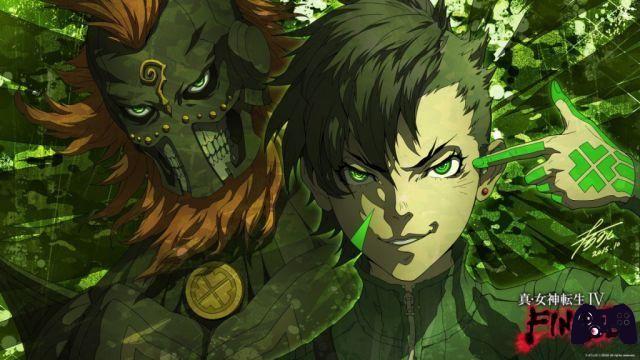 Two years ago Shin Megami Tensei IV was released in Europe, the new main chapter of one of the most important series Atlus. The title, one of the best JRPG released on 3DS, narrated the adventure of Flynn, a samurai from the eastern kingdom of Mikado who found himself in the middle of a war between angels and demons in post-apocalyptic Tokyo. As in many games in the series, SMT IV also allowed the player to choose three different alignments that would lead to three different endings. In the chaotic path the player would have lined up alongside the demons, in the legal one alongside the angels, and in the neutral one he would have rejected both occult powers to defend what remained of the human race. Shin Megami Tensei IV: Apocalypse, more than a sequel a kind of standalone expansion, takes up the setting of the main game and is placed entirely within the so-called "neutral path", telling a different version of the events of that storyline. 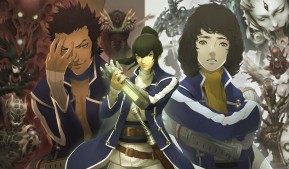 Between angels and demons, again

The protagonist of Apocalypse is Nanashi, a XNUMX-year-old boy born and raised in demon-infested Tokyo and a rookie member of the Hunters' Association. After a few hours of play, times more than anything else to introduce the setting, the first and decisive twist, which will set the Apocalypse sequence of events in motion. Nanashi will in fact be killed by a high-level demon and in the underworld his soul will make the acquaintance with the Celtic deity Dagda. He will propose to Nanashi to bring him back to life, as long as the boy becomes his puppet and personal "exterminator of divinities". However, the story of Apocalypse will not be a simple narration from a new point of view of the events of Shin Megami Tensei IV. The Nanashi Adventure starts roughly two-thirds of what was the neutral path in SMT IV, and he moves away from this, proposing completely new developments in history. Apocalypse, like SMT IV, will also have different bifurcations of the story and different endings, but this time it will not be the canonical chaotic, neutral and legal alignments, as much as different shades of gray of what is considered a neutral alignment. Apocalypse seems to want to respond directly to the criticisms that some have addressed to the plot of SMT IV, which took too many hours to go live and which was plagued by rhythm problems. Unlike its predecessor, Apocalypse immediately throws the player into the fray, with a steady pace and driven by continuous twists. The game also does a good job of reintroducing characters, settings and situations, instantly making itself known also available to those who have not played Shin Megami Tensei IV. It is clear that those who already have some knowledge of the world of SMT IV will immediately find themselves at ease in reviewing already known names and in understanding certain references on the fly, but Apocalypse manages to be completely approachable even by the most complete newbies. The level of the narrative is in any case very high, if possible even more than in the previous chapter. As in SMT IV the focus is not so much on the characters and individual protagonists, however well characterized and pleasant, but on the ideals and the ethical and moral conflicts, in what is a real theological thriller.

Given its dual nature of sequel and expansion, Apocalypse fully reproduces the gameplay of SMT IV, merely introducing gods minor tweaks and corrections rather than upheavals. In fact, we find the classic JRPG loop, with exploration and turn-based combat, and an alternation of main quests and secondary missions. Once again the combat system called press turn is employed. Basically, whenever you use an attack that takes advantage of an elemental weakness of the enemy, you will get extra turns, while if you were to use an attack against which the enemy is resistant, we will lose our right to action. The study of the weaknesses of the various enemies and the planning of one's party and abilities therefore becomes fundamental to face Apocalypse: the same advantages that the press turn system grants to the player are also granted to the enemies, and it takes very few mistakes to transform what might have seemed an easy opponent into an unstoppable killer.

The difficulty level of Atlus games is notoriously high and Apocalypse is no exception. Things are however more balanced than the predecessor, which presented a very high difficulty curve in the early hours and waning in the rest of the adventure. Apocalypse has a more traditional progression and some adjustments for those who want a less demanding adventure, such as a difficulty selector and infinite Continues. With regard to the three available difficulties, the intermediate one is equivalent to the standard one of the previous game, the lower one is particularly suitable for newbies while the higher one is aimed at those who want to turn every single match into a last-round challenge. The combination of the press turn system and the level of intense challenge makes Apocalypse altogether free from voltage drops: the typical situation of many JRPG hardly occurs where common enemies become so scarce as to be just a nuisance for the player.

Another reason to pay attention to every single encounter is the ability to recruit opposing demons. As if it were some kind of Pokémon mature, SMT IV: Apocalypse allows us to field demons alongside Nanashi, demons that we will have convinced to join us by selecting the dialogue option during the battles. These dialogues are one of funniest, weird and surreal moments in the whole game. In fact, the various demons will make fun of us, will make absurd requests or will simply speak in strange and particular ways, forcing the player to guess every time the most suitable answer to the context. The demons obtained will level up by gaining experience during the clashes, acquiring new skills (which they can also transmit to Nanashi, allowing you to customize its fleet of moves) and occasionally "evolving". The demons can also be obtained through another way, the merger. Two or more demons can in fact be merged to give life to a completely new creature, able to inherit the moves of both "parents". The fusion mode is particularly interesting to get not only demons that are impossible to recruit normally, but also to customize their fleet of moves. At this juncture we will have to keep in mind the affinity that each demon has for each element, a parameter introduced in Apocalypse. While it may be tempting to stockpile moves of disparate types to make demons more versatile, it will be important to combine fire-like moves with fire-like monsters to maximize their effectiveness. 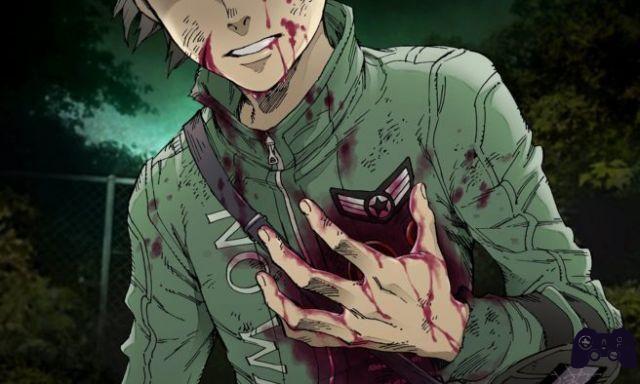 In addition to those already listed, there are several tweaks made by Apocalypse to the game and combat system of SMT IV. Take for example the change in the functioning of the “smirk” status. This status was obtained in the previous episode as a result of particularly effective attacks, and allowed to achieve critical hits ensured in the next turn and to greatly increase the evasion of opposing hits. In Apocalypse the smirk status will provide a minor offensive / defensive bonus, but will trigger side effects of some attacks, extending the possible game strategies. Another novelty concerns the partner system: it was already present in SMT IV, but it played an absolutely marginal role. In Apocalypse, the partner will intervene at the end of each turn, performing a single action in support of Nanashi's party. At each turn a bar will fill up, which, when fully charged, will allow a sort of special attack in which all available partners will join forces, healing the protagonist, attacking enemies and interrupting the opponent's turn. Although there is no direct control over the partner's actions, the player has on his side the possibility to select a main partner from among those available. Some of them will be more inclined to heal, others to perform upgrades, still others to perform support attacks. The refinements to these various gameplay mechanics, combined with the difficulty from the more traditional curve, make Shin Megami Tensei IV: Apocalypse a much more balanced game than the previous one. Always difficult, but much less unfair to the player.

The tendency to improve without revolutionizing is also confirmed in the audiovisual sector. Apocalypse recycles most of the assets, settings and sprites from the previous game, resulting virtually indistinguishable from this, were it not for a slightly higher screen cleaning. Apocalypse is not surprising from a graphic point of view, just as SMT IV did not do it two years ago, but it always remains a solid and pleasant-looking title, with one of the best stereoscopic 3D effects seen on the handheld console. On the other hand, Apocalypse also inherits some criticisms of its predecessor, such as the absence of stylistic unity in the artwork of the hundreds of demons present in the game, an undoubtedly minor flaw, but which gives the title a "budget" aspect that it certainly does not deserve. For the music and the dubbing, the praise already conferred to SMT IV is confirmed. Many songs have been recycled from the great soundtrack of the old game, and the new ones fit perfectly between the other compositions, contributing to the apocalyptic, electrifying, eerie atmosphere of the title. A rather important criticism that can be moved to Apocalypse under the profile of the technical and artistic realization is precisely that of his excessive resemblance to its predecessor. Not that this is bad in itself, given the high quality of the two works, but those who have played and dissected the environments of Tokyo for dozens and dozens of hours in SMT IV, could be caught by a bit of boredom in having to new to travel the same locations made with the same graphics and with the same music for other tens of hours. This is perhaps the only real flaw of SMT IV: Apocalypse.

Verdict 9/10 Get ready to insult many gods! Comment Like Shin Megami Tensei IV, Apocalypse is a great JRPG and one of the best seen on 3DS. Accessible even to newbies, it's perfect for those who haven't had enough of the fascinating world we discovered two years ago on 3DS. Apocalypse is a sequel that does not revolutionize anything, but improves, refines, chisels many small details of SMT IV, resulting, on balance, better than its predecessor. The only possible criticism is in fact that of not daring enough, of being too similar to what was already seen and played two years ago, but it is undoubtedly a minor sin, for what is yet another great 3DS masterpiece. Pros and cons ✓ It improves SMT IV in many ways
✓ Mature and always interesting plot
✓ Challenging and exciting x Graphically it does not scream a miracle
x Too much "recycled" by SMT IV
Do you want to be a video game expert and know all the tricks, guides and reviews for your video games ? Holygamerz.com is a group of video game fanatics who want to inform you about the best tricks, guides and tips. We offer you the best information to be a reference in gaming, so here you can find guides, tricks, secrets and tips so you can enjoy your games to the fullest. Are you ready to get all the achievements of that game that you resist so much? Enter now and enjoy your favorite video game to the fullest!
Just Dance 2016 review ❯

Among The Sleep Review