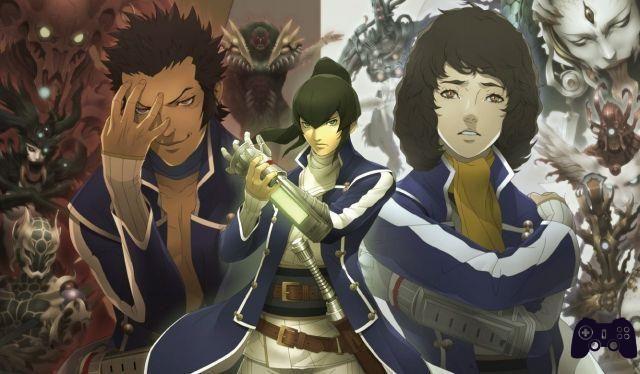 After an interminable wait of over a year and a half, Shin Megami Tensei IV, the fourth main installment in the series that made it famous Atlus even before recent hits like Catherine, Etrian Odyssey and Persona (itself a spin-off series by Shin Megami Tensei), it was finally released in the old continent as well. The company has opted for a digital only release, displeasing the proponents of the physical copy and collectors, allowing us, in exchange, to enjoy what in America and Japan has long been considered one of the must-haves of 3DS. After having dealt with the recent releases of the franchise such as Devil Survivor Overclocked and Soul Hackers, we certainly could not fail to offer you the review of this new chapter of the saga, whose importance is underlined by the official numbering.

Beyond Good and Evil

Right from the start, the title strikes for the unusual setting: if most of the titles of the saga have a contemporary setting and have their fulcrum in the relationship between technology and occultism, in Shin Megami Tensei IV we will find ourselves projected into Eastern kingdom of Mikado, a nation of medieval mold, which mixes elements typical of European Middle Ages and Ancient Japan. In the reign of Mikado, the social order is rigidly codified into classes: on the one hand we will have the wealthiest classes, residing in the richest districts of the city, while on the other we will find the commoners, distributed in the poorest districts and in the various neighboring villages. . The protagonist of the game, called Flynn by default, is a resident of the nearby village of Kiccigiorgi, who goes to the city to participate in a rite that sanctions the transition to majority age for all the subjects of the kingdom. Through the rite very few elected every year have the opportunity to become part of the body of samurai, abandoning family and place of origin but acquiring all the rights of the richer classes of Mikado, together with a great responsibility. The samurai are in fact those who acquire the ability to fight the demons and / or to communicate with them, effectively constituting the bulwark of the kingdom of Mikado against possible supernatural invasions. As expected Flynn will be one of the 5 samurai apprentices selected this year, who will be provided with the "gauntlet", a technological device that is apparently detached from the medieval setting of these early stages. Thanks to the gauntlet and the artificial intelligence contained in it, Burroughs, the young man will therefore be able to face demons, but also to bargain with them, convince them to become allies and therefore even summon them and deploy them in battle. The plot of the game will start very slowly, with the first stages acting as a tutorial and therefore requiring us to investigate the mysterious Black Samurai, an individual who is disturbing the social order of Mikado, distributing forbidden literature to the commoners, inciting them to revolt and turning them into demons. Later we will venture into an increasingly complex plot, which will touch on classic themes of the series such as the relationship between human beings and demons, that between technology and the supernatural, social conflicts and moral dilemmas. The other samurai apprentices accompanying Flynn embody distinct moral positions (good, neutral, chaotic), which will be reflected in their points of view and action, and more than once we will be required to side with one rather than another. In all this, one is to be rewarded really excellent writing quality, able to involve and immerse the player in a story that necessarily touches on rather heavy themes, assisted by an English dubbing of the highest level. Unfortunately, both the voice acting and the text on the screen are exclusively in English, leaving both those unfamiliar with the Albion language and purists who would have liked a dubbing in the original Japanese language, supported by subtitles, speechless.

In terms of gameplay Shin Megami Tensei IV looks like a JRPG distinctly old school and hardcore, without those various evolutions and contaminations that the genre has undergone over the years. There is a strong component of dungeon crawling: both the main story and the frequent accessory quests will force us to explore dungeons in which to face numerous fights on the razor's edge. In SMT IV we will very rarely find ourselves in situations where we can afford to take fights, even those with common enemies, under the leg. Combat takes place in turns and presents the typical Press Turn system of the series: by making critical hits or exploiting the elemental weaknesses of the enemies we will get turns in which to carry out attacks or additional actions, while missing a hit or mistaking element we will lose the right to our subsequent attacks. Strategy and knowledge of enemies and attacks therefore plays a major role, e a single right or wrong attack may be enough to dramatically change the fate of a match. As previously mentioned we will have the opportunity to bargain with the various demons we will come across, to push them to ally with the protagonist. This mechanic resolves into gods brilliant dialogues, in which we will have to guess the right answers to give to the demon on duty, also based on his alignment and personality, especially taking into account the cultural differences and in the way of thinking between humans and demons. We will also have the possibility of merging two or more demons to obtain new, presumably more powerful ones. Also in this case the knowledge and study of the characteristics of the various supernatural beings, coming from religions and mythologies from all over the world, will be fundamental. At this juncture we notice a very welcome change compared to the past: for the first time the abilities of the demons obtained with the fusion will not be predefined, but will be decided by the player, starting from those of the original demons. Not a small innovation, which saves countless frustrations due to mergers "gone wrong". L'high level of difficulty of the game will irreparably cause numerous game overs. In these cases we will be transported in front of the infernal barcarolo, Charon, who, net of a bribe, will agree to bring us back to life exactly in the point where we were defeated. We can choose to pay it both in Macca, the game currency, and in Play Coins, the coins obtained by walking with the 3DS in stand by. In any case, before resorting to this possibility, it is always better to carry out frequent rescues and adequate planning: abusing Charon could completely drain the funds of the player, leaving him unable to purchase basic equipment and weapons in the continuation of the adventure.

You don't judge a book by its cover

The technical aspect of Shin Megami Tensei IV turns out to be less satisfying than those related to the plot and gameplay. Although we are dealing with a 3DS title and not a major console one, the overall look of the game it is not at the level of other similar productions. In spite of the prestige and importance of the title, and the maniacal care lavished in other areas, it almost seems to be in front of a title budget: the graphics are polygonal, but during the battles the enemies are represented with simple two-dimensional sprites, largely recycled from previous games in the series. The same three-dimensional portions of the game appear excessively simple and sparse in detail, in stark contrast to the elegant and precise look of the menus and the beautiful background artwork to the numerous conversations. A positive point is undoubtedly the effect Stereoscopic 3D. Although this feature of 3DS is becoming less and less used, the game shows off an excellent 3D, able to give a perfect feeling of depth, totally free of ghosting or overlapping effects. The sound sector, on the other hand, is excellent, with compositions capable of both emphasizing the urgency of the fighting and the atmosphere of the more exploratory phases. The dubbing, despite the absence of the original Japanese track, is truly of the highest level and manages to convey the excellent writing of the game and its characters even more strongly.


Verdict 9/10 The long wait has paid off Comment In 2014 it should no longer happen that we have to wait for the localization of a title for over a year and a half. Unfortunately this was the case for Shin Megami Tensei IV and we are sorry that it happened with such a high level game. Shin Megami Tensei IV is not only the great return of an official chapter of one of the most loved series by "niche" players, but it is also a masterful example of how storytelling and game mechanics can come together to give the player an experience of uncommon game. Shin Megami Tensei IV is intriguing, profound, difficult, fascinating. The only sector that shows the side to criticism is the graphic one, perhaps the result of an inadequate budget, while minor complaints could arise from the digital only release, the absence of Spanish localization or the original Japanese dubbing. But woe to choose to overlook this title for these reasons: SMT IV is too bright a title to be ignored, and every JRPG enthusiast equipped with 3DS should play it. After Fire Emblem: Awakening and Bravely Default, JRPG's "sacred trinity" on 3DS is finally complete. Pros and cons ✓ Interesting, mature, profound themes
✓ Excellent writing
✓ Solid gameplay and hardcore challenge level
✓ First quality sound compartment x Graphically, more could have been done
x Available only in digital, in the face of collectors
x No Spanish localization
x The original audio track is missing

Do you want to be a video game expert and know all the tricks, guides and reviews for your video games ? Holygamerz.com is a group of video game fanatics who want to inform you about the best tricks, guides and tips. We offer you the best information to be a reference in gaming, so here you can find guides, tricks, secrets and tips so you can enjoy your games to the fullest. Are you ready to get all the achievements of that game that you resist so much? Enter now and enjoy your favorite video game to the fullest!
Mortal Shell Guide - Guide to all trophies and Platinum [100%] ❯

Empire Of Sin Review, An Offer That Unfortunately Can Be Refused - Review

Oculus Quest 2, the best VR headset of the moment | Review