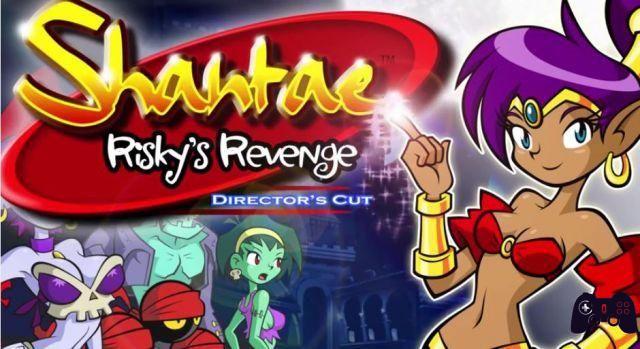 It was the year 2002, in collaboration with Capcom landed on Game Boy Color Shantae, spiritual heir to Monster World and one of WayForward's first works, putting players in the shoes of the young half-genius in a mix between platform and action game (or commonly referred to as metroidvania). Although acclaimed by the critics of the time Shantae did not obtain the hoped-for economic success, leaving the following chapters in the hands of WayForward alone, who over the last few years have given the genietta two other adventures (with a fourth in development). The second episode, Risky's Revenge was initially a DSiware exclusive, released eight years after the first chapter, Shantae was back in action to stop her rival's revenge, introducing new mechanics and characters. In 2015 WayForward re-proposed Risky's Revenge in Director's Cut version, first on PC via Steam and later also on PlayStation 4, adding all the modifications of the Ios port to the base game, finally on March 24th, Shantae: Risky's Revenge Director's Cut (now only Risky's Revenge) was also released on Wii U (making company with The Pirate Curse, the third installment of the 2014 class series) at a price of € 9,99.

The calm that envelops the days in the alleys of Scuttle Town is interrupted by the arrival of the giant tub of Risky Boots, intent on revenge for the defeat suffered at the hands of the half genius Shantae. The sensual protagonist manages to repel the attack, not before discovering the new plan of the pirate: collect three magical seals and awaken the dormant power in a legendary lamp.
Shantae will then set out to explore Sequin Land far and wide, to get her hands before her rival on the precious seals and foil their evil plans again.

To complete the events of Risky's Revenge it will take about ten hours (much less according to the internal counter) between bosses to be defeated, puzzles to be revealed and collectibles to be collected to enhance the purple-haired girl. The plot of this second chapter is also appreciable by those who have not played the previous one, representing an excellent entry point into the WayForward series. The flagship of the production, however, is Shantae herself: the team has managed to characterize her through irreverent jokes and convincing animations, making her adorable in practically every juncture of the adventure. 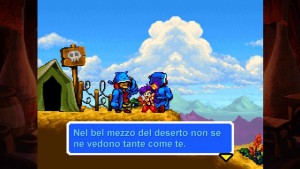 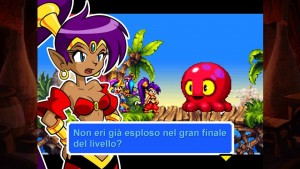 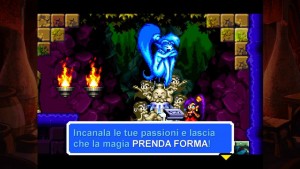 Release the animal in you

As mentioned at the beginning, Risky's Revenge is a metroidvania: the player will have to unlock the three transformations of the half-genius in order to access new areas that were previously unreachable. The girl has many tricks up her sleeve, useful for defeating Risky's henchmen or the owners of magical seals, including first of all her purple hair, which can be used as a whip not only to attack opponents, but also to destroy the vessels containing the objects. medicines and rupees. During the recovery of the three seals Shantae will awaken as many transformations: the monkey, which will allow her to climb walls; the elephant, able to destroy fragile blocks and pave new ways, and finally the siren which, as can be guessed, will allow her to explore the depths of the sea. Each of these transformations has a relative power up, which adds a new ability and further increases the possibilities of the half genius. 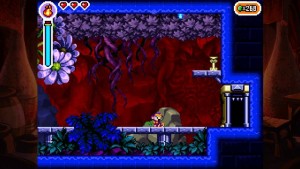 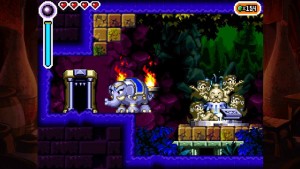 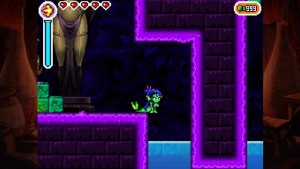 Three magical tools close the arsenal, which can be purchased in the Scuttle Town shop in as many variants: the fireball capable of inflicting burn damage on enemies (and recommended against mummies and the like); the pointed globes, a defense tool capable of damaging the enemies too close to the genietta and the stormy cloud, which can be moved before the attack thanks to a blow from the canopy. The items will use Shantae's magical energy, which can be restored through potions or, if purchased the necessary upgrade, over time. In addition to the game coins, to buy powerful tools and passive upgrades for shantae, you will need to find jars of magic jam scattered around Sequin Land (the collectibles we talked about in the last paragraph), significantly increasing the longevity of the title which, despite this, unfortunately it remains very short. 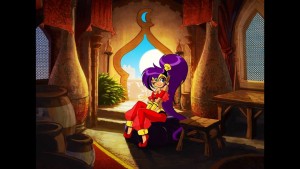 So far we have limited ourselves to analyzing Risky's Revenge for the content of the plot and gameplay very similar to the 2011 DSi version but we must not forget that this is the Director's Cut version, and therefore not a mere porting of the portable release. WayForward has added a teleportation system (seen in the mobile version of the title) that allows Shantae to move much faster in the lands of Sequin Land, favoring back-tracking and hunting for the collectible. A new map has also been added which unfortunately is all too confusing and useless for the purpose of exploring the game: moreover, the title does not exploit the GamePad in any way, simply streaming what happens on the TV, forcing the player to access the menus. interrupting the game to consult the inventory or precisely the map.
Finally, there is the Magic Mode, unlockable at the end of the game and which, in addition to giving an even less covering dress to Shantae, increases her magical power by doubling the damage suffered by the opponents. 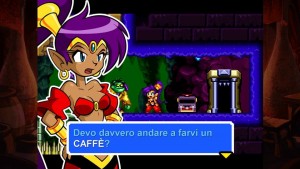 The title is offered with two vertical bands along the sides, remaining a mere HD porting of the DSi title also from a visual point of view. Although dated, the sprites of the characters enjoy valuable animations, which have always been one of the touches that distinguish WayForward's work. Risky's Revenge is completely translated into Spanish even if there are no audio tracks in order to leave complete space for the Arabian music of the title.

Verdict 8/10 I want my personal half genius Comment Shantae: Risky's Revenge - Director's Cut is appreciable even if you haven't played the original Shantae for GameBoy Color (which you can recover for € 4,99 via 3DS Virtual Console) and is an excellent entry point to appreciate the WayForward series thanks to an increasing difficulty (typical of the genre) and the very successful character design of the protagonists. But in the whole production it is the genietta who is the master: it is impossible not to fall in love with Shantae and her irreverent reactions to the game events although the title can be concluded in the space of a few afternoons. Lovers of the genre can throw themselves with their eyes closed into the arms of the purple-haired girl, sure to find a funny and still very solid title in their hands. Pros and cons ✓ Successful Character Design
✓ Pleasant soundtrack
✓ Excellent exponent of the genre x Damn short
x Confusing map
Do you want to be a video game expert and know all the tricks, guides and reviews for your video games ? Holygamerz.com is a group of video game fanatics who want to inform you about the best tricks, guides and tips. We offer you the best information to be a reference in gaming, so here you can find guides, tricks, secrets and tips so you can enjoy your games to the fullest. Are you ready to get all the achievements of that game that you resist so much? Enter now and enjoy your favorite video game to the fullest!
News Life is Strange 2: here's the launch trailer for Episode 2 ❯

Go Vacation Review - A vacation in the past

Project Winter Review - The heat of the company