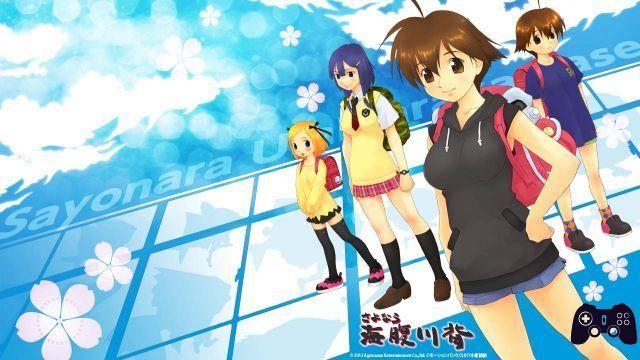 There are many videogame series that remain confined to their homeland for years, either for the genre suitable for a few, or for the contents that concern only the motherland, forcing foreign players to resort to different and not always legal means in order to try a certain title.
Umihara Kawase is one of these series exclusively reserved for the Japanese: until last March, in fact, the brand born in 1994 on Super NES was confined to Japanese soil. Finally Agatsuma Entertainment, former architects of Code of Princess, finally decided to try an export of the adventures of the nineteen year old armed with line and hook.
So Sayonara Umihara Kawase, fifth chapter exclusive to 3DS, also arrives in North America, via eShop, with the westernized title "Yumi's Odd Odyssey"; a month later, Agatsuma Entertainment tries again and launches the title also on the European 3DS, exclusively in digital, at a base price of 24,99 €, while keeping the original title.

Who is the plot for?

Sayonara Umihara Kawase it does not provide any plot sequence during actual gameplay. Once started, in fact, you will be immediately catapulted into the main hub, where you can select the levels to be faced.
The only incipits to the story that are given by the developers can be found in the character sheets, and they hint at a sort of time travel by the protagonist and the other two girls available from the beginning. Any other interaction of the plot is left freely to the player's mind, a useful trick to avoid diverting attention from the real heart of the title: the game mechanics.
As in the unpublished titles for the West, also in Sayonara Umihara Kawase, the protagonists have at their disposal a magical hook, which they can launch towards the walls to swing through the levels, dodge obstacles, catch the terrible anthropomorphic fish and reach the exit door as quickly as possible.
Spread across the fifty levels of the game, there are some collectibles in the form of a backpack. Collecting enough of them, the player will unlock various extras, from music to images for the gallery, passing from special costumes for the protagonists to a fourth mysterious character.
Even without a real plot Sayonara Umihara Kawase manages to entertain for many hours, mostly thanks to difficulty that takes over almost immediately and that oozes from every pixel of the game.

Spins a lure, any size

Before facing the difficulty of Sayonara Umihara Kawase it is necessary to say a few words on the core of the game, the gameplay and the mechanics of Kawase's and associates' love.
You can move the girls with the directional cross (or by enabling the Circle Pad in the options), jump with B and use the aforementioned Hook with Y or R. The hook can be attached to most of the colored surfaces present in the levels and will allow them to heroines to swing to overcome obstacles and reach the coveted exit.
After attaching to a ceiling or wall you can reduce or increase the length of the line by simply pressing up and down on the directional pad, the "Slingshot" effect will allow Kawase to increase or reduce the momentum of the pendulum, reaching platforms too far away to a simple jump.
Relatively, to help the player in the enterprise there is the possibility of blocking the time with L for a couple of seconds, aiming in the decided direction and releasing the line immediately afterwards; Mastering this technique will also require a lot of time and patience on the part of the player.
All the gameplay is based on being able to coordinate the techniques of Kawase's Hook and reach the exit of the level in the shortest possible time.
The other two protagonists of the title have additional abilities to Kawase's basic ones: Emiko, the nine-year-old blonde cousin, allows you to start over from a checkpoint, even if only for once, while Noko, Kawase's niece from the future. , will be able to move in slow motion during the time block, helping the Hook aim for the next cast.


Other than Super Meat Boy

If the basic mechanics of Sayonara Umihara Kawase seem simple and intuitive, the same cannot be said of the difficulty level of the title.
The first ten levels flow more or less calmly, even if there will be failures, reported punctually in the main hub. The real challenge will begin only later, with the search for secret exits that will test the player's ability with the Hook.
In addition to being well hidden, these doors are unreachable without the coordination of the techniques we talked about previously, and trying to reach them drags the player into a spiral of depression and frustration, whenever he sees Kawase and the other girls fall and die from a wrong throw. even slightly.
Fortunately, there is no life limit (if not in survival mode) but only a nerve-wracking counter that will put you in front of your repeated failures.
Unfortunately, the difficulty is not as well calibrated as in other exponents of the genre, and if you are not willing to retry a level indefinitely (in some cases reaching a three-digit number of bankruptcies) you risk giving up the title to itself very soon.
Unfortunately, even the price of € 24,99 is not an incentive for casual players, especially since there are much more User-friendly titles at the same price or even less on the 3DS eShop.

Return to the old generations

In addition to the gameplay, which as mentioned makes it Sayonara Umihara Kawase an arcade platformer as tough as those of the early nineties, even the visual aspect seems to have remained that of the last century.
The polygonal models of the protagonists are poorly defined and seem to come out of the PSone chapter of the series; the disturbing enemies, on the other hand, are inexplicably cared for more.
The 3D effect is well done, but it is too much, and hinders especially when trying to improve their times or reach a secret exit, prompting the player to deactivate it forever.
The soundtrack is devoid of personality, becoming only a mere contour to the curses of the continuous failures.
Finally, the entire game is in English, but given the scarce amount of texts in the title of Agatsuma Entertainment, a very basic knowledge of the Anglo-Saxon language is sufficient.


Sayonara Umihara Kawase will satisfy those who crave a continuous and lasting challenge, giving great satisfaction once you have mastered the game mechanics perfectly.

Verdict 7.5 / 10 Coining blasphemies has never been easier Comment With Sayonara Umihara Kawase, Agatsuma Entertainment offers European players a challenge with an all-Japanese footprint, an old-fashioned arcade platformer that does not allow any mistakes. Perhaps the price is a bit excessive, especially for the low set of gamers it is aimed at: if you love frustrating challenges and the constant challenge of yourself, this fifth chapter of Kawase's adventures is the platform for you. If not, the 3DS eShop offer offers many much cheaper and affordable titles for everyone. Pros and cons ✓ 50 different levels
✓ A real challenge ...
✓ Gameplay capable of giving satisfaction once mastered x ... but sometimes unnerving
x Perhaps excessive price
x Graphically, more could have been done

Do you want to be a video game expert and know all the tricks, guides and reviews for your video games ? Holygamerz.com is a group of video game fanatics who want to inform you about the best tricks, guides and tips. We offer you the best information to be a reference in gaming, so here you can find guides, tricks, secrets and tips so you can enjoy your games to the fullest. Are you ready to get all the achievements of that game that you resist so much? Enter now and enjoy your favorite video game to the fullest!
Azure Striker Gunvolt review ❯