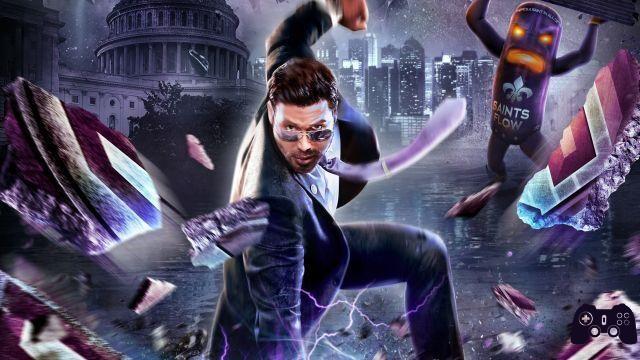 Born in 2006 in the wake of GTA, the videogame series Saints Row has managed over the years to obtain its own identity and a true following of faithful who, lovers of extreme actions and unbridled humor of the saga Volition, eagerly await each new episode / DLC. After being released on last generation consoles, Saints Row IV has also arrived on PlayStation 4 e Xbox One (and obviously PC) with a new version called Saints Row IV: Re-Elected, containing numerous graphic updates and all the additional content released so far. These introductions and a competitive price will suffice (49.90 €) to make the title attractive or are we facing yet another soulless commercial maneuver?

God save the president!

The plot of Saints Row IV can be defined with only two words: totally insane.

The plot of Saints Row IV can be defined with only two words: totally insane. After averting a nuclear attack, our nameless protagonist is elected president of the United States. Everything seems to be going well until the terrible commander Zinyak and his alien army decide to attack Earth. It will be up to our hero, together with the help of all the Saints not yet captured by the enemy, to defeat this terrible threat and save what can be saved before it is too late. After the extreme action of Saints Row: The Third, the boys of Deep Silver Volition they push their foot on the accelerator even more giving us one plot full of humor, heart-pounding actions e totally zany characters. The immense amount of citations from any work (and from any medium) guarantees apop soul to the title that can rarely be found in other titles nowadays. Right from the start you will fall in love with every single character present in the adventure and, thanks to simply perfect dialogues in their humor, you can't help but be left with a stupid smile on your face at every exchange. This remastered edition for the current generation consoles also guarantees you a large number of additional hours thanks to the presence of all the DLCs available up to now, including the last one Gat out of Hell that it is also possible to buy in a stand alone version and also in the PlayStation 3 and Xbox 360 version. From a narrative point of view we are therefore faced with a massive dose of content that, both in quantity and quality, can only conquer the player from first to the last mission.

Saints Row IV, compared to its predecessors, it manages to give one sound shock to gameplay thanks to the introduction of superpowers. Unlike in the past, in fact, the title differs a lot from the mechanics that made it similar to a GTA, getting closer to more extreme free roaming such as InFamous and Prototype. These new mechanics, in addition to being perfectly functional to the narrative structure, they manage to be definitely fun fully marrying the zany style of the saga. In addition to the introduction of powers, Saints Row IV grants a large number of collectibles (more than 1000) and secondary events to play that will keep the player busy for a long time. In fact, we will be able to take part in numerous types of challenges (ranging from running races to those of environmental destruction, passing through a minigame that is very reminiscent of the "crash" mode of the first Burnouts), dedicate ourselves to the liberation of neighborhoods, to the recovery of vehicles, virus installations, climbing huge radio towers and many other things. The longevity of the main campaign of the title offering a ten hours of gameplay and who manages to never be tiring and not to lose their charisma. Charisma that is also maintained in the DLCs present within this remastered version and which offer numerous new missions to carry out with lots of new city to explore within Gat out of Hell (for the details of this vast additional content, we refer you to the review coming out in the coming days).


When dubbing makes a difference

The sound sector of Saints Row IV is, in a nutshell, exciting and appropriate

Under the technical profile Saints Row IV: Re-Elected manages to amaze thanks togreat job done. In fact, we are faced with a cleaner title and capable of even surprising in some particle effect or in some small detail (for example in puddles). They were removed, Furthermore, all bugs that characterized the old gen version of the title and now, beyond the 1080p, Saints Row can enjoy the granite 60 frames per second; feature that makes the title extremely smooth to see and comfortable to play. It must be admitted, however, that i Polygonal character models reflect the old gen nature of the title and, unfortunately, this affects the acting of the same which sometimes appears cumbersome and not very expressive. However, the dubbing which is not only characterized by a excellent level in general, but which boasts the possibility to choose among the various items also "Nolan North”, A famous voice actor who undoubtedly manages to further raise the sound quality of the title. The music is also excellent that are wisely used in some sections of the adventure with hilarious results and / or able to characterize the action more.

Verdict 8.5 / 10 GTA according to Deadpool Commentary Saints Row IV: Re-Elected is the perfect opportunity to play this title. Not only have the bugs and problems that plagued the version for the last generation consoles been eliminated, but a great job of remastering has also been done and inside there are all the DLCs released up to hours (which adds many hours of fun). A demented humor, a satisfying gameplay and an exciting sound sector are just some of the reasons to make this edition of Saints Row yours, which, we are sure, will have fun from the first minute of play. Pros and cons ✓ Exciting dialogue and excellently scripted plot
✓ Solid and fun gameplay
✓ All DLCs included in the "budget" price
✓ Great remastering job x Polygonal modeling of the characters dated
x Difficulty calibrated downwards

Do you want to be a video game expert and know all the tricks, guides and reviews for your video games ? Holygamerz.com is a group of video game fanatics who want to inform you about the best tricks, guides and tips. We offer you the best information to be a reference in gaming, so here you can find guides, tricks, secrets and tips so you can enjoy your games to the fullest. Are you ready to get all the achievements of that game that you resist so much? Enter now and enjoy your favorite video game to the fullest!
News New Nioh Gameplay in the "Futamata" level ❯