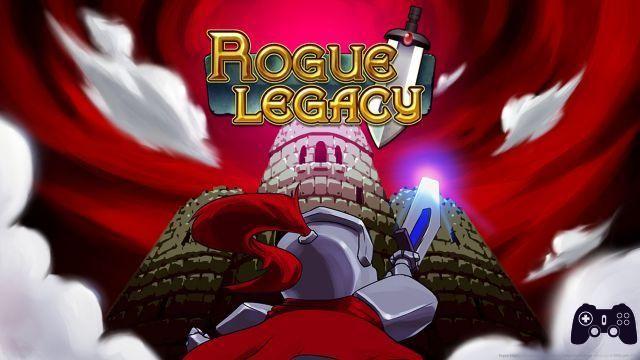 After making a killing of players on PC just over a year ago Rogue legacy, the action-platform from Cellar Door Games, has landed on PlayStation Network thanks to Abstraction Games in a triple Cross-buy version dedicated to PlayStation 3, Playstation 4 e PS Vita.

Once upon a time there was a brave knight, intent on defeating the evil enclosed within an impregnable castle. This hero, however, had a short life, leaving his lineage the task of continuing this battle, with the supreme purpose of putting an end to the wickedness of this dark lord. Rogue Legacy tells us about this, about a generational alternation of characters with an average short life, prematurely torn from the player's hands due to a decidedly out of the ordinary challenge rate, as a ruthless executioner would do with his victim. An almost feeble story, told by excerpts from a diary that gradually we advance in the adventure will acquire more and more substance and then materialize in an epilogue with interesting implications.

Rogue Legacy is an old-school platformer halfway between the golden age of Castlevania and the grueling difficulty of a Dark Souls, basic in dynamics and easy to learn. You jump, attack with your sword and cast spells, leaving the player with the bulk of the game putting his skills to the test. At the beginning of the game everything will seem inaccessible, at times unreachable. Our character will start from his small castle to head towards the mansion that contains death inside, making us feel almost helpless in the face of this task. Once inside the headaches begin, and after having explored a few rooms it will be almost the norm to fall at the hands of enemies or fall victim to some deadly trap, forcing us to file the hero on duty to pass to his heir starting the adventure all over .

The "rogue" that appears in the title refers to a very specific genre, that of rogue-like, an obsolete videogame genre belonging to a school now distant in time. The peculiarity of roguelikes lies in some characteristics that outline the traits of the gameplay such as the random generation of the dungeons or the definitive death of the character. In Rogue Legacy we find these two elements applied to the platform genre, where each entrance to the castle corresponds to a new generation of the game map, creating a new plant in a completely random way, while with the departure of the protagonist, every progress made will be lost.

Each run will prove essential to access the upgrades

Each run will prove to be fundamental and necessary to be able to level and have access to a whole series of upgrades that will make our character more performing and able to face any pitfall more adequately. Exploration is a central aspect of Rogue Legacy, in fact the money collected can be spent to expand our stronghold, unlocking new areas that will correspond to upgrades, classes and "services" that we can use to lighten the adventure.

Tell me what class you go with, I'll tell you who you are

Let's start with talking about the classes, one of the cadins of Rogue Legacy gameplay.

At the death of our character we will be called to choose a new hero with whom to resume the adventure, finding ourselves in front of three heirs generated in a completely random way. Each class boasts unique and distinctive characteristics, such as the Paladin, one of the more balanced fighters or the Mago, weak in close combat but skilled in the use of magic, or the Shinobi, fast and snappy with rather high attack values ​​but unable to perform critical hits, and let's not forget the Undermine, indispensable for the most demanding farmers thanks to its ability to obtain greater returns from the money raised. But these are some of the various classes available, all to be experimented to find the one that best suits your style of play or suitable for certain situations. The class of belonging will not be the only element with which we will have to choose, as each character in addition to varying in physical appearance and sex, it will also inherit a peculiar trait that will massively affect the gameplay. There are those who will be born with some genetic diseases related to vision such as myopism, making everything around us blurred with the impossibility of locating the dangers, or characters with personality disorders, others with problems related to obsessive-compulsive disorder, and who will earn HP or MP by destroying the elements within the levels, or nostalgic, which will see the world in a sepia tint with an amarcord taste. There will be dozens of traits that can be handed down over the generations, some of which are decidedly brilliant and inserted simply to elicit more than a laugh, such as those suffering from coprolalìa that will lead them to use bad language or hypochondriacs, which will tend to magnify the damage. received.

Children of the future

To help us on our adventure we will also find 4 figures who will settle down just before the castle to invade and that will give us a hand. On our side we will have the Blacksmith, which will provide weapons, armor and accessories as long as you have found the projects to make them and the Seer, which with its runes allows us to obtain additional abilities, such as the very useful double jump, or the ability to make quick "dashes" to avoid traps. Each part of the armor can accommodate a different rune, for a maximum of five and it will be up to us to manage the best combination according to our needs depending on the occasion. Then we find the architect, who plays a rather delicate role, almost a kind of lifesaver within the game. Paying him part of our future revenues, the Architect is able to freeze the plan of the castle preventing it from changing at our entrance. This loophole, which partly simplifies things enough,

allows you to bypass the strict rules of Rogue Legacy and is especially useful when we will have to deal with 4 bosses that separate us from the final battle, as thanks also to comfortable teleportations you can return directly to them in case of defeat. Last Charon, a mysterious figure who will demand all our monetary wealth in order to be able to return to the game, an essential tax that forces us to choose well on how to spend our possessions before getting back on the road.
With regard to the bosses, it will be necessary to arrive well prepared and aware of the danger that awaits us, and do not think you can beat them immediately at the first try with simplicity. With their lethal attacks they will completely invade the screen, forcing us to carefully study the attack patterns trying to find a breach in their defense, with clashes that take on the tones of a true epic enterprise. As if that weren't enough, in this console edition, all the improvements and updates made to the PC version have been added, including the Remix version of the bosses, new even more difficult challenges, which will put a strain on your nerves.
Getting to the end of Rogue Legacy turns out to be a titanic undertaking, an experience certainly out of the ordinary, but which at the same time repays those who play it with an immense and rare satisfaction that is difficult to find in similar titles.

The difficulty that may seem unnerving, here takes on another dimension, it turns into a drug for the player.

The difficulty that may seem unnerving to most, here takes on another dimension, turning into a drug for the player. The runs follow one after the other, driven by the desire to see what lies beyond where we have arrived or to discover a way to take down the boss after losing dozens of characters in the most absurd ways and having cursed in the worst way.
Once finished, and we are talking about several hours since our first playtrough lasted about 30 hours, it is possible to access the New Game +, which does not add anything new to the game formula if not further increase the difficulty, which will rise to current level that we will have reached.

Rogue Legacy boasts a more than discrete graphics sector, especially considering that it is an independent production, with a pixel art that harks back to the classics of the 16bit era. The inspiration, as we said at the beginning, is clear and directed towards the Castlevania series, and both the game structure and the appearance of some surrounding elements recall with pleasure the Konami series. It pays the price of the random creation of the environments, which if it works in terms of level design, with a generation so varied that it is almost impossible to have to deal with the same room twice, on the other we have a certain repetition of the decorative elements depending on the area of ​​the castle. Despite this, the game works perfectly, without problems of any kind related to the fluidity of the action although on many occasions the screen becomes saturated with enemies, leaving the platforming clean and free of smudges. Special mention for the soundtrack by Tettix & A Shell in the Pit, two English composers who offer a splendid selection of chiptune songs, which will alternate during the exploration of the castle, with tracks full of rhythm, rocking guitars and mandolins with a medieval flavor, to then explode in an emotional charge thanks to the poignant melancholic symphonies of piano and violin in one of the most beautiful tracks of the entire game, Whale. Shark, song that accompanies the final sequence and the credits.

Verdict 8.5 / 10 If you swear it doesn't get easier! Comment One more game and then I quit. These will be the often futile words that you will find yourself repeating playing Rogue Legacy. The Cellar Door Games title is a drug that is difficult to break away from. Although on balance it is a rather demanding title and far from being innovative, it contains some insights at the level of gameplay that raise it from a market, the indie one, increasingly inclined to fresh and refined experiences. Rogue Legacy therefore becomes one of those inevitable purchases, a title to have, try and enjoy until the end. We often complain about the lowering of the average level of difficulty of today's video games, well, Rogue Legacy will make you regret every word, bringing back your hardcore gamer side in you. Pros and cons ✓ Roguelike mechanics applied to the platform genre
✓ Thrilling soundtrack
✓ Impossible to detach from the game x At first the difficulty can be frightening
x Unfortunately it ends
Do you want to be a video game expert and know all the tricks, guides and reviews for your video games ? Holygamerz.com is a group of video game fanatics who want to inform you about the best tricks, guides and tips. We offer you the best information to be a reference in gaming, so here you can find guides, tricks, secrets and tips so you can enjoy your games to the fullest. Are you ready to get all the achievements of that game that you resist so much? Enter now and enjoy your favorite video game to the fullest!
Kung Fury review: Street Rage (PS4) ❯