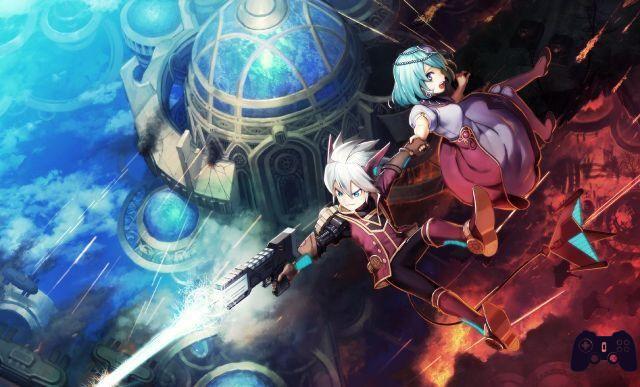 After a wait of almost 5 years, Rodea the Sky Soldier, last effort of Yuji Naka, is finally available. The game released on Wii U and 3DS, as discussed in the our review, however, is not the same one conceived by Sonic's father, but rather his "remake" made by the internal staff of Kadokawa Games, and ultimately a title in all respects inferior. Thanks to the European publisher NIS America it is however possible to enjoy the original Wii version as well (also playable on Wii U, thanks to the backwards compatibility of the console), present in all "first print" copies of the Wii U edition. If the interpretation of Rodea performed by Kadokawa had not convinced us at all, how will the verdict change with " Rodea di Naka ”?

Rodea the Sky Soldier for Wii is a completely different game from its 3DS and Wii U counterparts. While the story, setting and characters are identical, and the level layout is largely the same, as for the gameplay it is presented in a totally different way. Rodea on Wii is one of those “experimental” titles that embrace the use of the Wiimote to create new game solutions. The only usable controller will be here the Wii Remote, without the presence of any auxiliary controller, including Nunchuck. While in the other versions the movement of Rodea was controlled by the left stick, here it will be enough to hold down the B button and the android will move in the direction in which we will point the Wiimote. To move the camera, just move the Wiimote near the edges of the screen; the coupling of distant targets is done by means of a pointer and a simple flick of the wrist is enough to take flight. The shifting of the aiming reticle, in the other versions tragically slow, in the Wii edition is very fast and natural like pointing at something with a finger. The lock on system is always not completely perfect, but the incredible speed with which the use of the Wiimote makes possible the various operations in fact cancels the cumbersome and slowness found on Wii U and 3DS. The game style is therefore incredibly faster and more frenetic, thanks also to a different arrangement of objects and collectibles.

While the other versions had a certain exploratory focus due to the distribution of objects and power ups in particular or remote areas, the Wii version focuses much more on the action: here long chains of special stars can be hooked for a kind of Light Speed ​​Dash at Sonic (option also present in the other versions, but with shorter and more sporadic chains) and the entire flow of the game is based on passing in flight from objective to objective, as quickly as possible. The possibility of firing weapons, in the other versions of the permanent feature of Rodea, here is instead conferred by temporary upgrades and their limited use in the sections that require it. The medals, instead of being hidden as collectibles in remote points of the levels, are found within 2D mini-levels, accessible from portals scattered along the path. While there is also a score evaluation system in the Wii version at the end of each level, the game here is completely devoid of the character upgrade system, just as there is no health bar (one hit and you die, two hits if boosted by some power up). This Rodea is simpler, but also more immediate and rewarding for the player. Not everything is perfect, mind you. Every so often it happens to not be able to perfectly control the character, and every now and then it happens to have to argue a bit with the camera. But this is nothing compared to the problems of the other versions.

There is no trace of the unlockable levels for extra challenges (the medals have the mere role of reward for the player) while it is present, surprisingly, a multiplayer mode of which all trace has been lost in the port / remake. In this mode, 2 to 4 players armed with Wiimote will be able to compete in split screen, each with their own android. The goal? Be the first to reach the end of the level, choosing the best path and best chaining your jumps and stunts. There are 5 different levels for multiplayer challenges, the last of which will be unlocked after completing the 20th chapter of the story mode. The Wii version of Rodea the Sky Soldier contains exactly the same audio and subtitle options as the others: English and Japanese dual audio, English, French, German and Japanese subtitles. The entire audio sector is practically identical to the Wii U and 3Ds versions while the biggest differences are found in the graphics. Although we are faced with a Wii title and therefore made in SD with all the technical limitations of the console, the graphic impact is generally more pleasant than in the other versions. The colors are more vivid and vibrant, and despite the less defined textures, the polygonal models appear slightly richer and more refined. The animations are much more elaborate and expressive than in the other versions, while the framerate travels at 60 FPS, albeit with some drops. Surely this version would have been a much more valid and interesting starting point for creating a Wii U HD port than the 3DS version, and we can't help but wonder what prompted the staff of Kadokawa Games to choose otherwise.

Verdict 8/10 This is the Rodea that matters Comment Rodea the Sky Soldier as it was originally conceived by Yuji Naka is a fast, frenetic and fun title that uses Wiimote controls to create something unique and never seen before. It is not a perfect title, with intrinsic limitations to its gameplay and its control system, but all the problems highlighted in the other versions are here more contained and easily manageable. Graphically, he feels the weight of the legacy of a console like Wii, even if in potentiality the work done by Naka and his companions is better than Kadokawa's sloppy and approximate one. The fact that the title is relegated to the mere bonus disk of the Wii U edition is a real shame, because Rodea the Sky Soldier for Wii is truly the title that deserves to be played between the two. We hope sooner or later NIS America decides to publish it separately, perhaps as a digital download on Wii U. Pros and Cons ✓ The ultimate great Wii game
✓ Action-packed, fast and frenetic
✓ Simple but effective multiplayer x Some problems with the control system
x Graphically it is still a Wii title and therefore dated
x Why relegate it to a mere bonus disk, why?

Do you want to be a video game expert and know all the tricks, guides and reviews for your video games ? Holygamerz.com is a group of video game fanatics who want to inform you about the best tricks, guides and tips. We offer you the best information to be a reference in gaming, so here you can find guides, tricks, secrets and tips so you can enjoy your games to the fullest. Are you ready to get all the achievements of that game that you resist so much? Enter now and enjoy your favorite video game to the fullest!
News Sniper Elite 3 Ultimate Edition is available on Switch ❯

Add a comment from Rodea the Sky Soldier (Wii) review